by Carl on October 25th, 2017 in Nintendo Switch Reviews 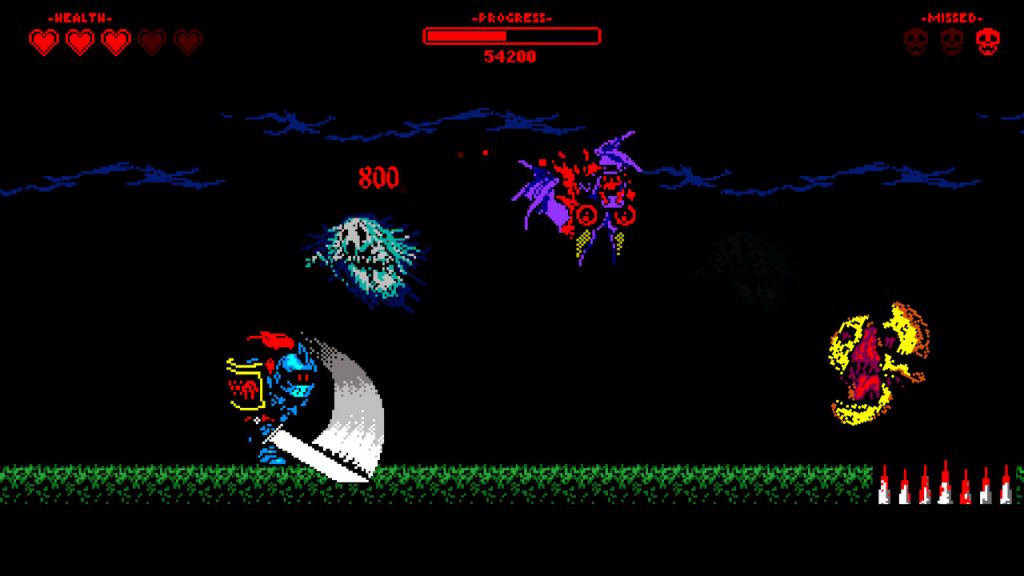 Thy Game Is Over

I finally set my controller down, taking a quick peek at my phone before my heart skipped a beat — it was already past 10 P.M. and I missed the Animal Crossing mobile direct by over an hour. On my TV screen were words that I had seen about a thousand times before: “Thy Game Is Over.” Knight Terrors had already sucked more playtime out of me than I intended for the night, but I wasn’t about to let those zombies and UFOs have the last laugh — I ran right into a spike and died the first time a UFO popped up on screen. I hit continue and was thrown into another chaotic, endless, and downright fun romp in the latest Nintendo Switch release from FreakZone Games and Nicalis.

Knight Terrors is an endless runner that takes most of its queues from Flappy Bird, oddly enough. You take control of a knight as you flap and slash your way through procedurally generated levels that last for as long as you’re able to stay alive. The levels were never long enough in my case, sadly. 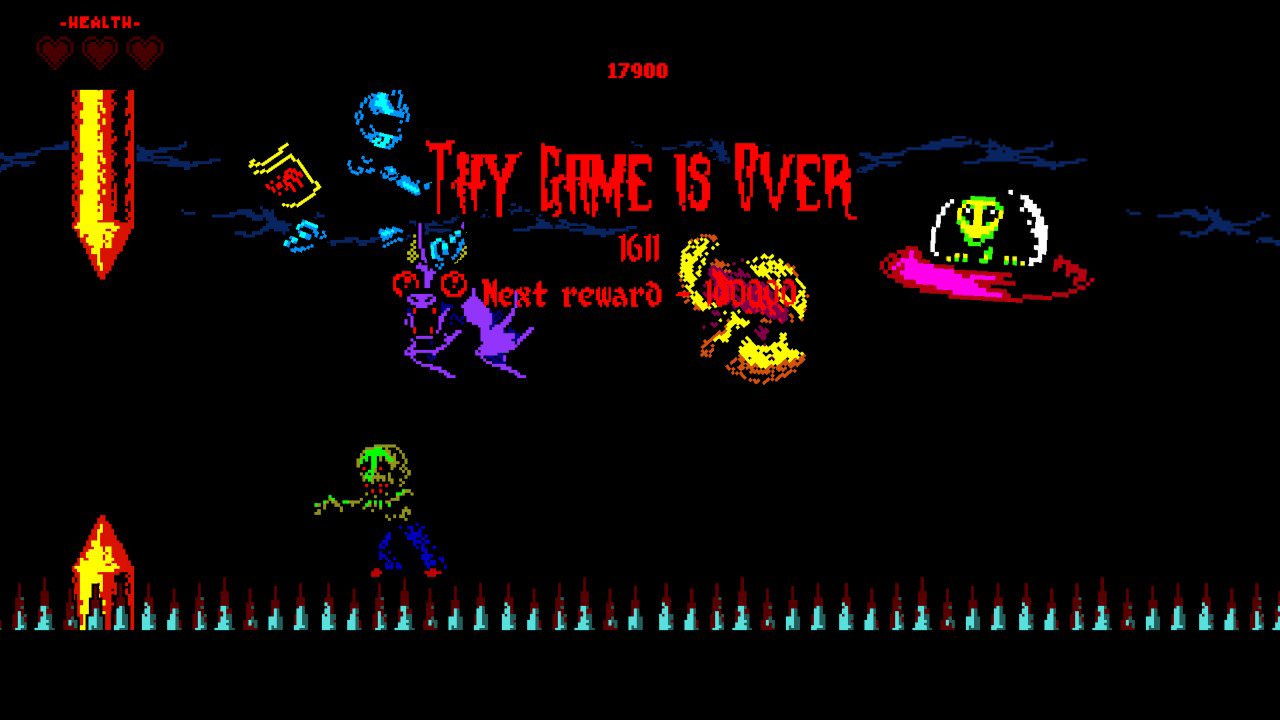 Unlike other endless runners, notably Flappy Bird and Temple Run, the challenge in Knight Terrors is both fair and rewarding. A lot of this has to do with releasing Knight Terrors on a console-portable hybrid that has buttons instead of phones — the Nintendo Switch is the perfect platform for this game. There are only two buttons you’ll be using in Knight Terrors: the left trigger to flap your vampire-like wings, and the A button to slash your sword. Everything else comes down to timing and judgement.

Four modes are locked right off the bat, and can only be unlocked after certain conditions are met; to unlock the first additional mode, for example, you have to reach at last level six on the normal game mode. Each of these additional modes emphasize a specific aspect in Knight Terrors that makes for an experience that’s just different enough from the last.

In normal mode, you have to avoid spikes on the ground and avoid taking damage from enemies that run at you — three hits and Thy Game Is Over. To shake things up, you also have to kill all of the knight’s enemies. Thy Game Is Over if three enemies make it by you. This gets really chaotic when there are a bunch of enemies on-screen; you have to decide, in a manner of seconds, which enemies you can kill without getting hurt and which ones you can afford to let by. Each of the additional modes take this essential premise and tweak it in some way. 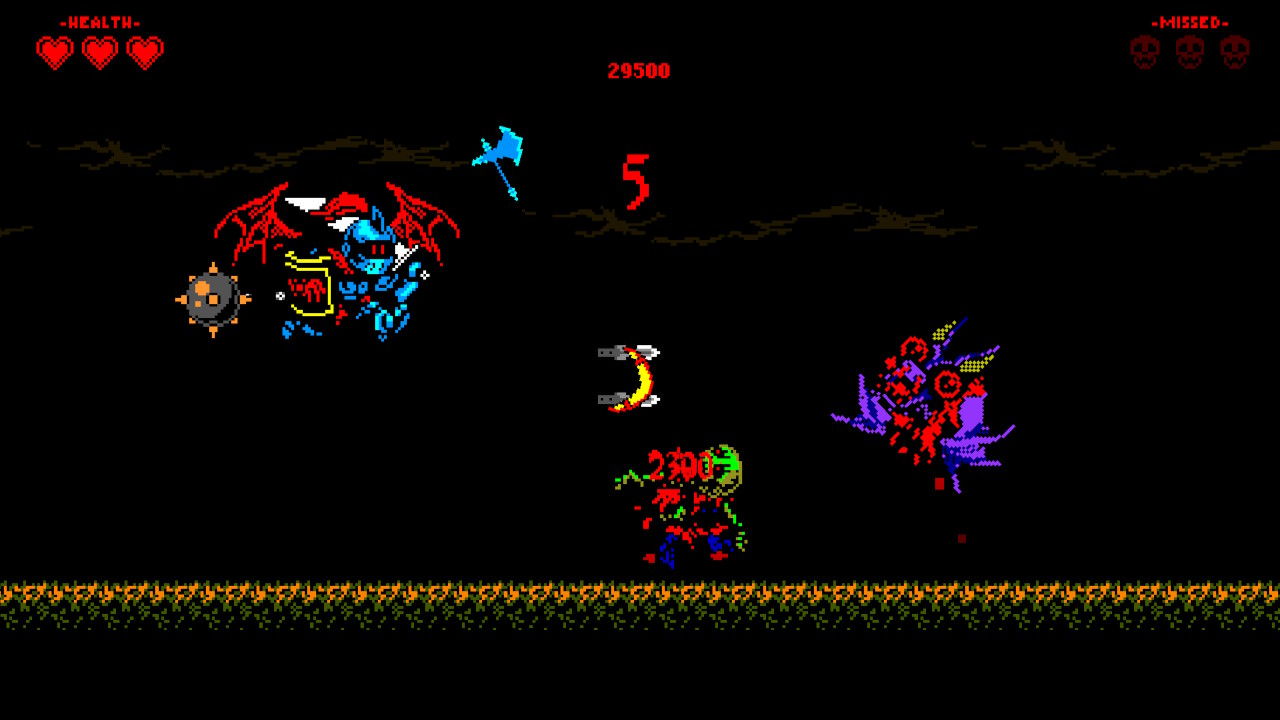 The first additional mode you unlock, after getting to level six in normal mode, is called Flight Terrors. This mode emphasizes the knight’s ability to fly like some sort of vampire hell-creature and removes the requirement to kill his enemies. You can still kill them, though, and it’s a good idea to: Flight Terrors is purely based on a high score that increases for each set of large spikes you flap between and each enemy you kill without getting hit. You’ll have to reach a high score of 50,000 to unlock the next game mode.

Locking each mode behind a different type of score requirement was a brilliant idea. My only gripe with each mode is that there isn’t an online leaderboard. Even though my scores are just barely enough to unlock each mode, it still would have been cool to match my scores up with other players online.

There’s a tangible feeling of progression despite Knight Terrors being an endless runner. Racking up a high score will unlock power-ups that randomly drop and bounce around in the middle of a run. The power-ups all have tongue-in-cheek names — like The Stick of Returning — and get pretty powerful as you unlock more and more of them. Power-ups stack, too; on one run that didn’t last nearly as long as I’d hoped, I had boomerangs and throwing axes flying all over the screen. 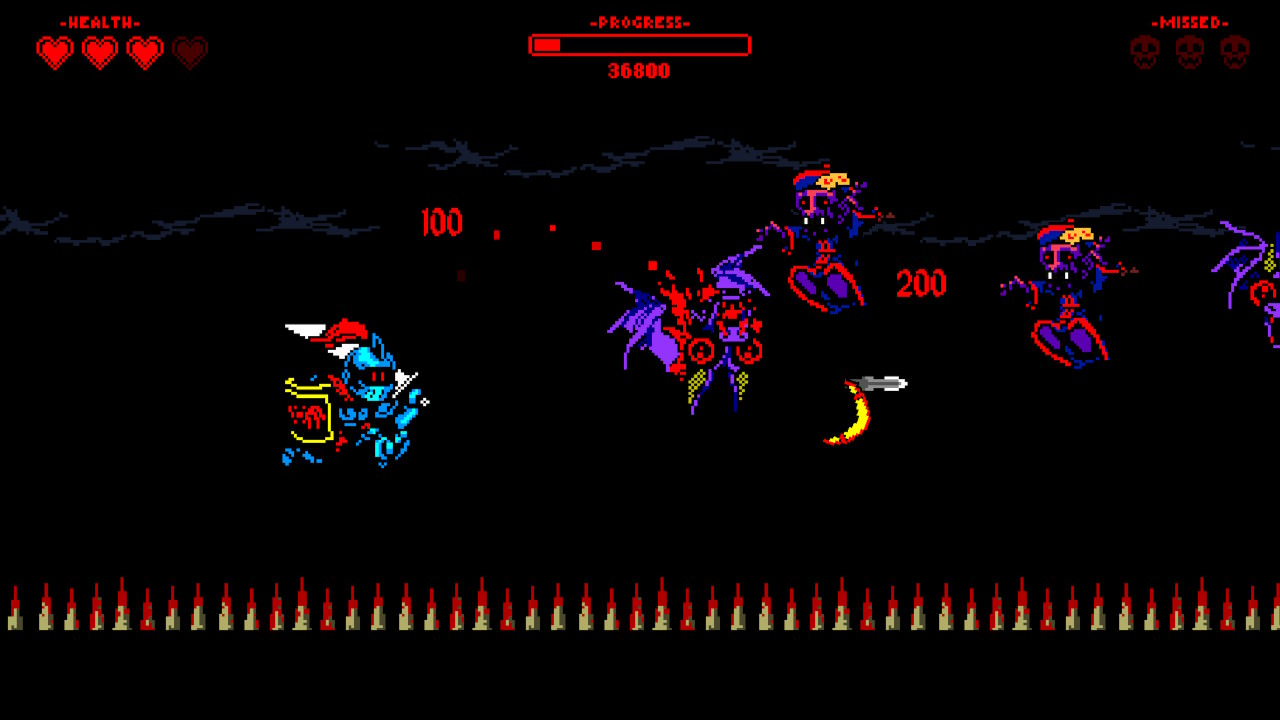 The chaos and intensity in Knight Terrors is matched perfectly by its score. It has the same sort of authentic retro sound as Shovel Knight. In fact, the entirety of Knight Terrors — from its opening menu to the game over screen you’ll see too many times to count — is hyper-stylized in a way that really immersed me in the whole experience.

The best part: it’s only $3 USD on the Nintendo Switch eShop.

Disclaimer: A review code for Knight Terrors was provided by Nicalis.

I'll be happily greeted with "Thy Game Is Over" for the next several months. If insanity can be defined as doing the same thing over and over while expecting a different result, then I'm insane and loving it. Knight Terrors is too damn good for a three dollar game.

This topic contains 3 replies, has 2 voices, and was last updated by