by Pete on September 17th, 2018 in Nintendo Switch Reviews 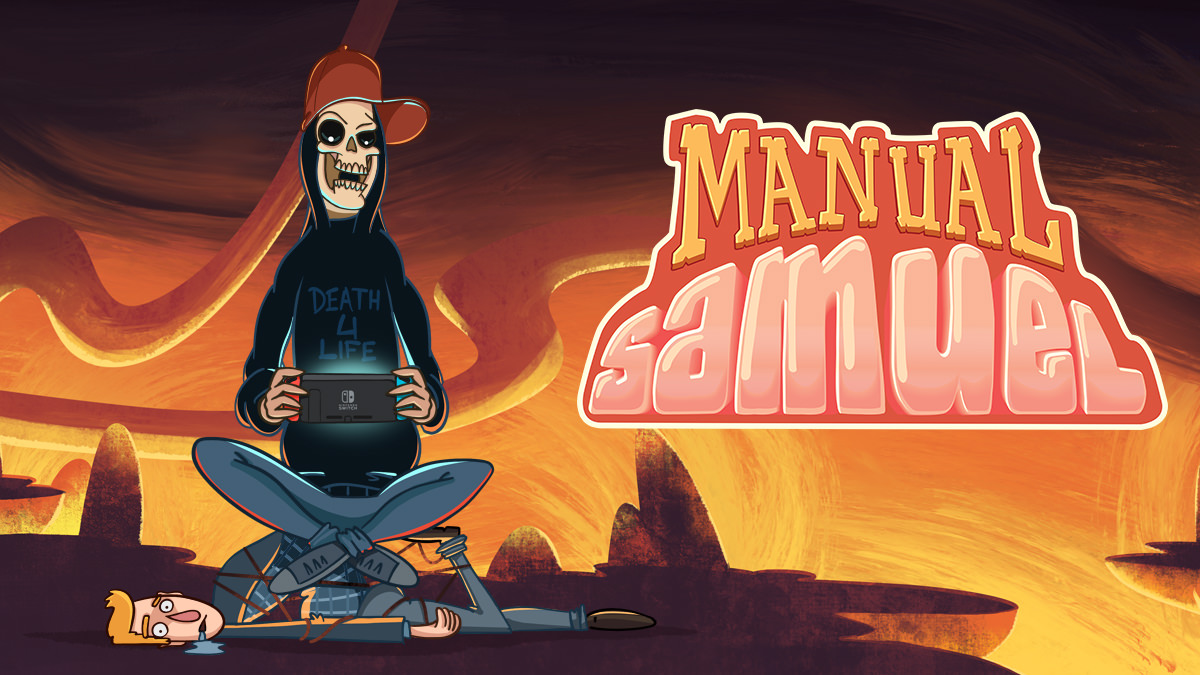 Games with bad controls are often at the bottom of the pile, but the games by the likes of Bennett Foddy have proved that a game with intentionally frustrating controls can sometimes shine through. Manuel Samuel is a game that requires your patience to progress through the levels, controlling each one of the main characters maneuvers with a button on the gamepad. That means a button for each leg or arm movement, inhaling and exhaling oxygen and another to keep blinking as you flop around the world trying to survive. 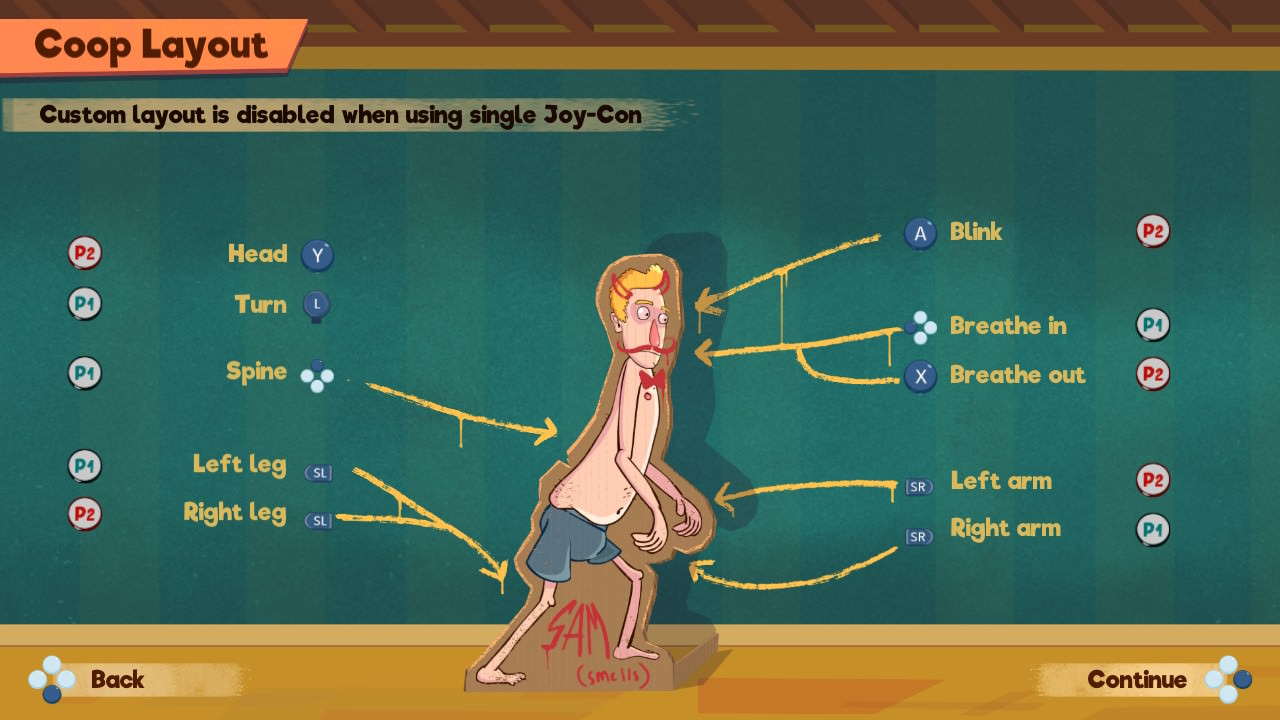 Death is my co-pilot

After Samuel meets the rad skateboarding champ Death at the gates of hell, he’s given the option to go back to earth and live if he can make it for one day doing everything manually. This means having to slow down and think about each small movement one has to make with their body to get around. The action in Manual Samuel is slowed down quite a bit, relying on your concentration to pass each stage, whether it’s making a cup of coffee or driving a car. It never feels like it’s trying to aggravate you on purpose however, with a charming cast of characters and voice actors providing the perfect amount of comic foil. Having a radical and jokey depiction of Death is something that’s worked wonders for games like Let It Die, and the smirking skeleton fits in nicely here as your spirit guide.

It’s not something that’s going to change how we view control in our games, but it is a novel concept executed well. This port for the Switch has a couple options for motion control that are a nice touch, adding an extra dimension to your approach. The art style is characteristically cartoonish and jovial, accompanied by a jaunty soundtrack that brings out the best in the silly tone that Manual Samuel is going for. While the story is incredibly dumb and some of the jokes corny as hell, none of it feels out of place. 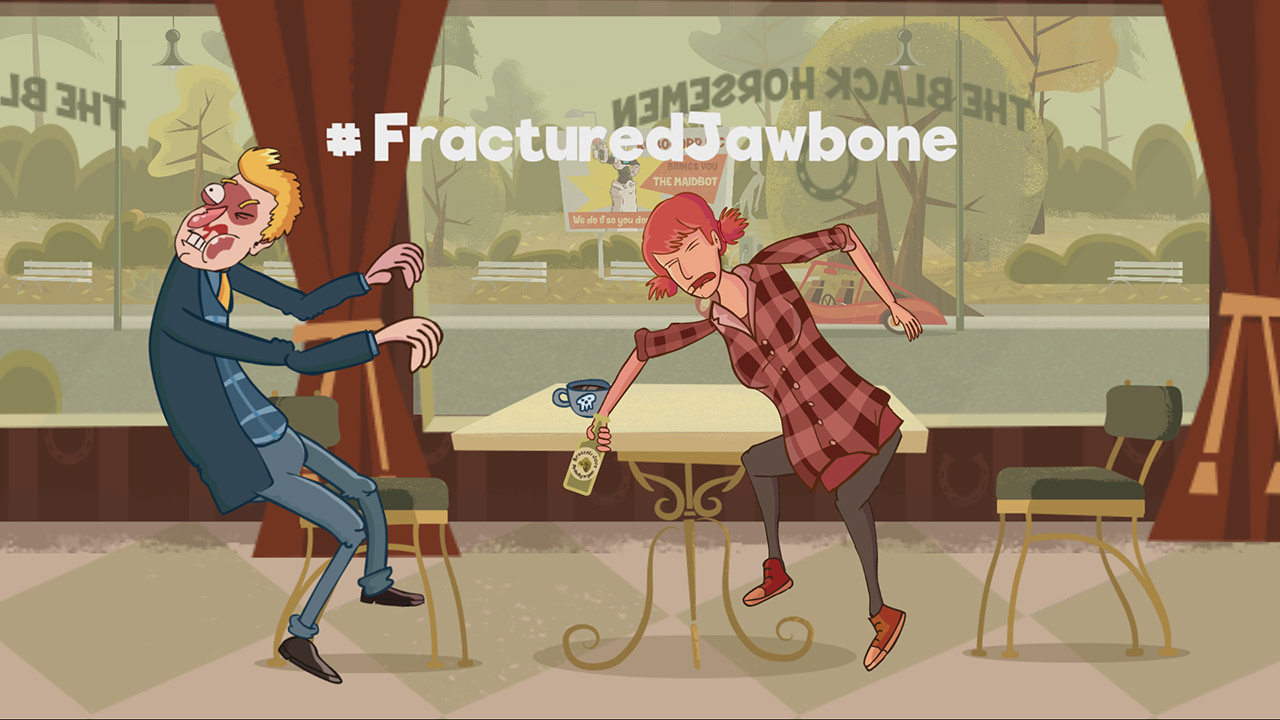 Although developed by the Norwegian Studio Perfectly Paranormal, the title feels as though it is a satire of American culture and the brash, uncaring attitudes of modern people. It brings to mind the point and click adventures of Double Fine or Lucasarts, if you enjoy the off-the-wall style humour prominent in those games you’ll probably enjoy this. It’s a short ride, finishable in a few hours but there is co-op and other modes to give it a little bit of replay value.

Disclaimer: A review code for Manual Samuel was provided by Plan of Attack.

The closest thing to QWOP on the Switch, Manual Samuel messes you around with its topsy-turvy control scheme and brings you into a charming little world of life vs death. There’s not a lot of room for adventuring or tough as nails puzzles, but what it does, it does well and serves as a great piece of cartoonish fun. This entertaining delve into the world of wacky controls is enough to invoke a reaction out of the most hardnosed puzzlers, which is enough for most of us.