by Link-NM on November 19th, 2018 in Nintendo Switch Reviews 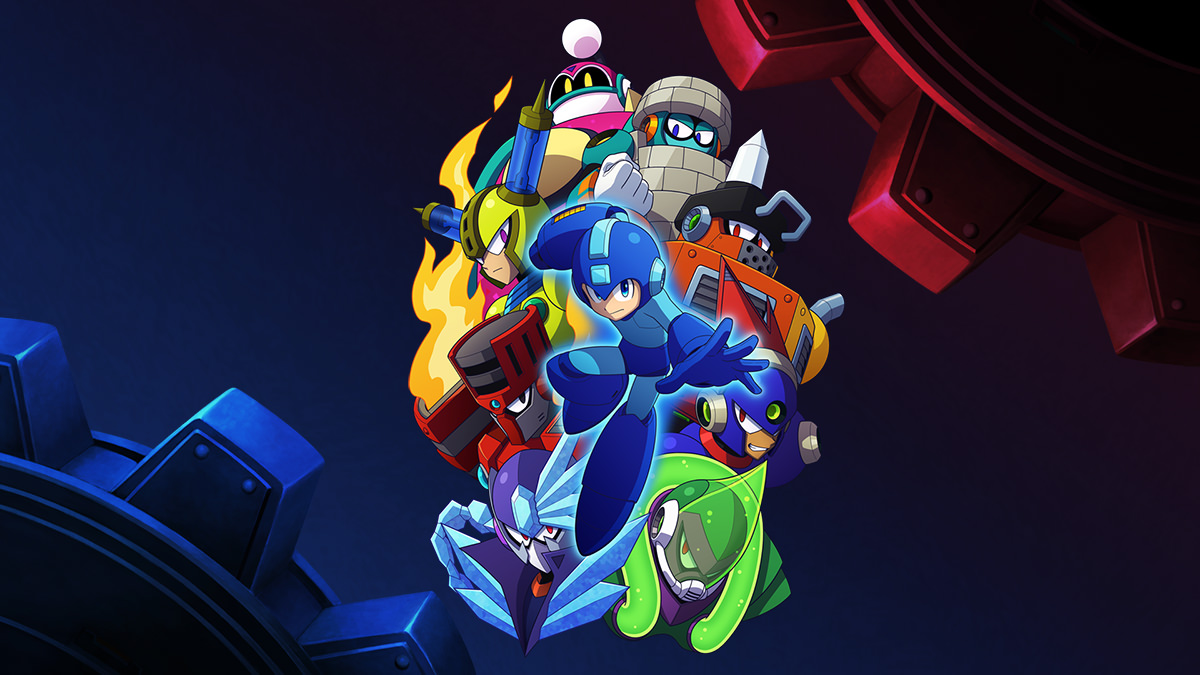 After 8 years, the blue bomber is finally back in a totally new game. Mega Man 11 is the next chapter in the classic Mega Man series and comes with a new engine and new 3D visuals. Of course, the big question is if Capcom has able to pull it off after several years without practice and making everything from scratch.

The game’s story is almost as basic as any of the first Mega Man games. The only difference here is that there’s a bit of background to the Double Gear System, the game’s new feature. Besides that, though, it’s the already expected story of Dr. Wily causing trouble through eight new Robot Masters and Mega Man has to defeat them.

Mega Man 11’s gameplay is pretty much like any other previous main game from the franchise. The game is an action-platformer in which you shoot and jump through eight levels before reaching Dr. Wily’s fortress, the game’s final levels. As expected, you can clear any of the eight levels in any order that you want. 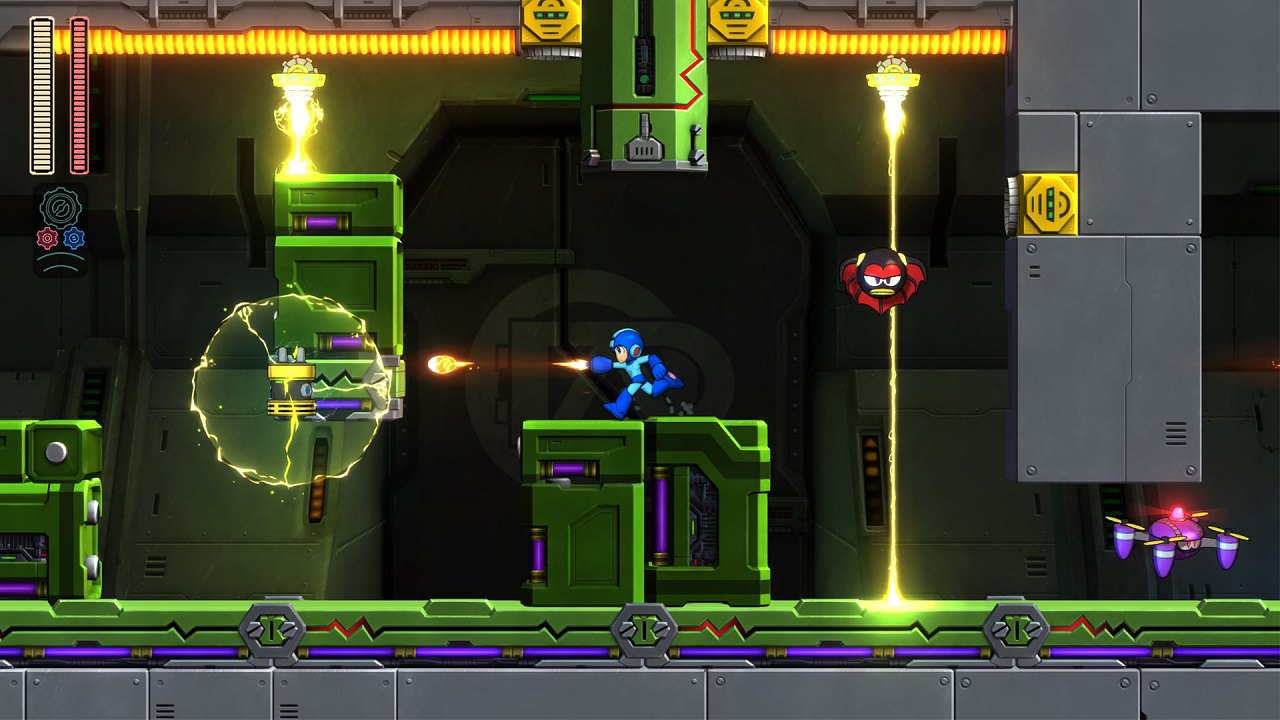 The game’s controls feel almost exactly as you would expect from a classic Mega Man game but not exactly the same way. They’re still very responsive and feel great, but there’s a bit of clunkiness that you can feel when doing certain actions the same way you would expect them in the previous entries. The overall feeling is closer to the classic NES games than the more recent ones and you can easily get used to slight clunky feeling of this new entry.

Besides the usual Jump and Shoot buttons, Mega Man 11 also makes a smart use of the new buttons that are now available in today’s controllers. It’s also worth mentioning that all the controls can be reconfigured to whatever you prefer. By default, the Jump and Shoot are set to B and Y respectively, which feels right. In a really smart move, Capcom has set the X and A as shortcuts for the Rush Coil and Rush Jet. This makes the game quicker as you don’t need to rely on the pause menu to call Rush anytime you need him (the option is still there if you want, though).

The ZL and ZR buttons are used to quickly change weapon while L and R are used for the game’s main feature, the Power Gear and the Speed Gear. Finally, the R stick can be used as another quick weapon change shortcut, which is nice as it gives you direct access to any weapon you want with just one flick. This is something that I’m sure a lot of speed runners will be grateful about.

There’s also an option for having Rapid-Fire and Slide as inputs available that aren’t enabled by default but can be configured to buttons if you want. 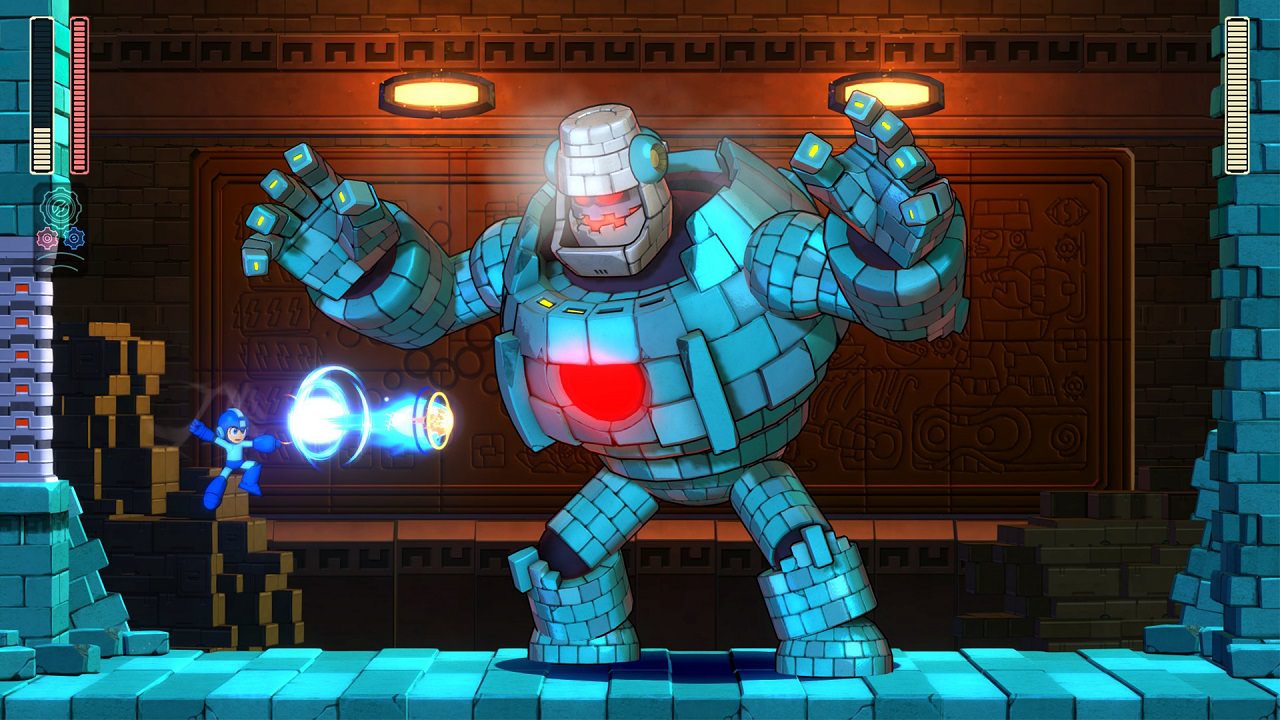 Each of the eight new Robot Masters have their own theme which inspires their own level with unique challenges. Block Man’s stage, for example, is clearly based around solid blocks that would be used for construction with dangers revolving around the idea of falling blocks obstructing your jumps. In contrast, Acid Man’s level has enemies that can turn water into dangerous acid.

With their own unique challenges, each level in the game also feels really well designed. The game can become quite challenging at some points but it’s never unfair or cheap. If you lose a life, it always feels that it’s because you messed up. There’s a natural progression in each level design. The first challenges you encounter essentially train you for what you will have to overcome later. So by the time you reach the second part of the stage, you know what to expect and how you’ll have to tackle it.

The new Robot Masters feel well designed too, each with their own personality and unique weapon. While the boss fights can feel hard at first, they aren’t difficult once you learn their pattern and it always helps once you know each of their weaknesses. As usual, defeating them will give Mega Man the ability to use a new weapon based on their attack. These attacks have different properties than the traditional buster and are useful in clearing certain level areas more easily. Additionally, each regular enemy also has a weapon they are weak against.

Of course, the biggest and newest feature in Mega Man 11 is the Gear System. The Gear System has three options: Power Gear, Speed Gear, and the special Double Gear. The game can actually be cleared completely without having to use any of them, it’ll just feel a bit more challenging than usual.

The Power Gear, as the name says, let’s Mega Man increase his power. This means that your attacks will be more damaging and destructive looking. The most interesting part of the Power Gear is the fact that you can use them to alter your weapons into powered-up versions of them. As an example, Tundra Man’s weapon only damages the area above and below you when used normally. When used while using the Power Gear, though, it hits the whole screen. 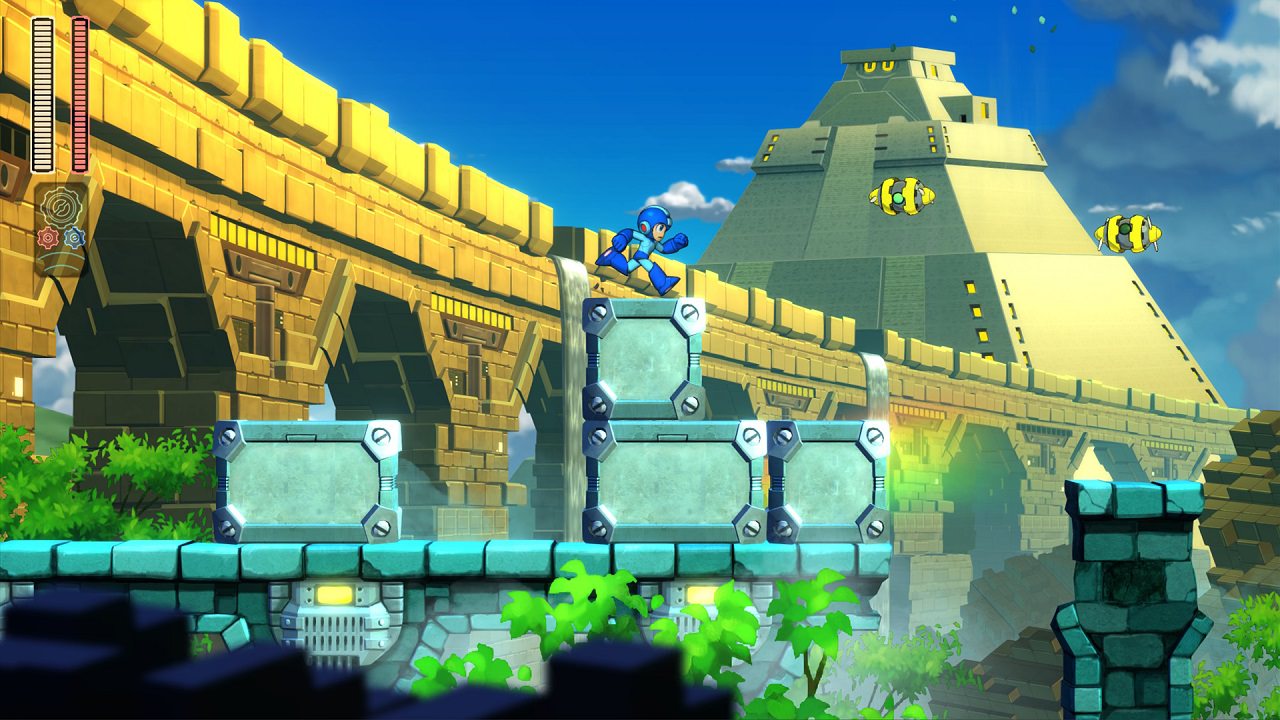 Still, the Power Gear doesn’t feel as useful when compared to the other one, the Speed Gear. This feature let’s you slow down time, making a lot of the game’s challenges a lot easier to clear. Evading quick attacks becomes a lot more simple to do. Besides this, the Speed Gear also lets you attack enemies quicker, which is why it ends up feeling a lot more useful than the Power Gear and what you’ll probably end up using the most from the two.

Finally, there’s the Double Gear feature, which is a special option that is only enabled when you are low on life. Think of it like a last resort attack. While enabled, the time will slow down and you’ll also have a special Mega Buster that is even more powerful than the one from just using the Power Gear.

Of course, though, there’s downsides to using each of the Gears, specially the Double one. When using any of the Gears, there’s a meter indicating the strain it’s causing on Mega Man. If it fills up, you’ll overheat and won’t be able to activate any Gear feature until it empties completely. This makes the feature feel balanced so that it can’t be abused but still be useful if needed. And while you can enable and disable the Power and Speed Gear at will, the Double Gear can’t be canceled at all. To make it even worse, if you overheat the Double Gear, you’ll be penalized with limited attacking power while it’s cooling off. This makes it so that you really think twice before deciding if you want to activate the Double Gear since you need to make it worth it or you’ll risk ending up in an even worse situation than before.

Besides these basic gameplay features, Mega Man 11 also includes an in-game shop for the main game mode where you can exchange bolts (in-game currency) for upgrades such as improved cooling for the Gear System, Auto-Charging, or simply just buying more lives. This provides you with a few gameplay options to make the game feel different (usually, making it slightly easier).

If you find the game too difficult, the game also has various difficulty options which you can select when you start the game. Two of them can make the game easier while there’s also one option that can make the game even harder than normal, in case you want an extra challenge.

Another good point to mention is that, graphically, Mega Man 11 is great. It has nice colorful graphics that never look odd at any point. The game also runs perfectly smooth at 60 frames per second during the whole time. Both of these things apply for both Docked and Portable mode.

On the side of audio, it’s overall ok but definitely not what you would expect from a Mega Man game. There’s only found a few of the songs that feel memorable with most of them feeling a bit bland. Unique but not catchy enough to remember after going through the stage. Pre-orders also had the option to use an Instrumental BGM DLC (also known as Arranged in Japan). Sadly, these tracks don’t make much of a difference and make some of the background music even more forgettable. To make it worse, the only tracks that are changed are the ones from the regular eight levels. None of the other game’s music gets switched. 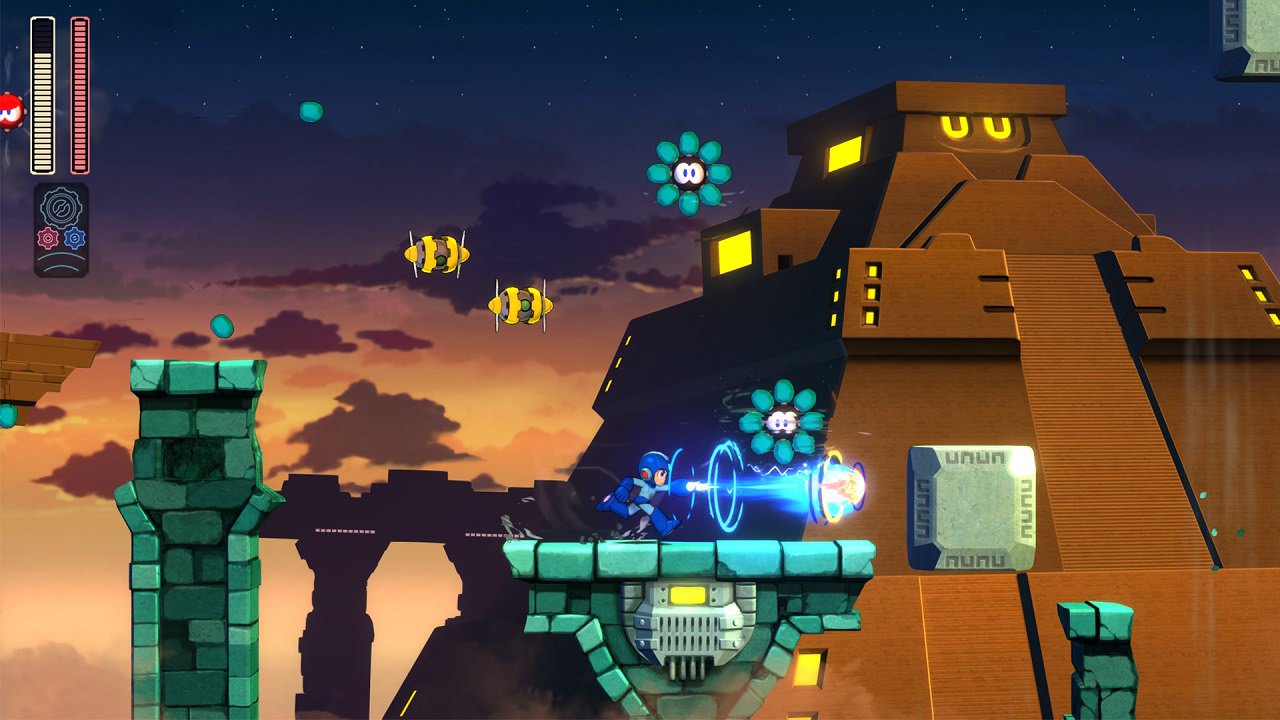 The sound effects are also well made but some of them, like the buster shots, feel like they could be better if changed to feel a bit more powerful or noticeable like in previous Mega Man games. The voice acting is available in both English and Japanese. While the Japanese voices feel right overall, the English ones aren’t as great. It’s a hit or miss situation with some of the character voices not sounding good and some of them being as good as the Japanese ones. Still, though, it’s a lot better than what Capcom previously did in Mega Man 8.

The game also features a few extras such as Challenge Mode with online highscores and a replay system, an achievement system called Records, and a gallery where you can see each of the enemies and bosses and also read information about them. The Challenge Mode can easily provide more replay value since the challenges are varied and you can learn new game strategies by watching replays from others. And the Records option has achievements that feel well designed, also increase the replay value, and can be challenging but not too hard to get if set your mind on getting them.

As for controller options, the game can be played with either the Pro Controller or a pair of Joycons. The game can’t be played with a single Joycon, probably due to the fact that the default controls use more buttons than what’s available on it. It also features decent HD Rumble.

Disclaimer: The reviewer purchased a copy of Mega Man 11 for this review.

Overall, Capcom has actually done it. Mega Man 11 is a great game and a successful return of the franchise. It's highly recommended and a must have for any Mega Man fan. The game feels right at home with the rest of the entries.