by Carl on December 11th, 2018 in Nintendo Switch Reviews 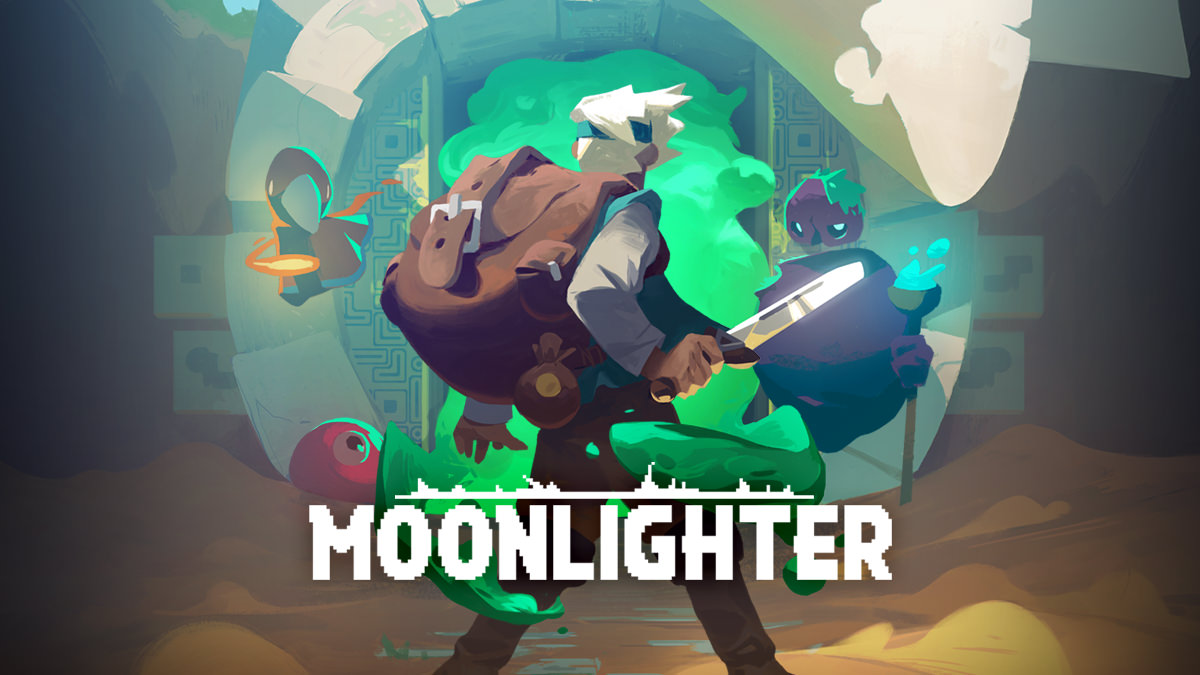 A gorgeous art style and a couple references to The Legend of Zelda certainly give Moonlighter a strong early impression; however, that fades pretty quickly after it becomes apparent just how limited in scope this latest roguelike for Nintendo Switch is.

Moonlighter opens with the main character moving through a couple of rooms in a linear Zelda-looking dungeon. The game uses on-screen prompts to teach players some basic mechanics (attacking, rolling, all the basics) before they’re forced to fight a horde of enemies using only a broom. It’s one of those battles that can’t be won, and players are knocked out and wake up in their shop. 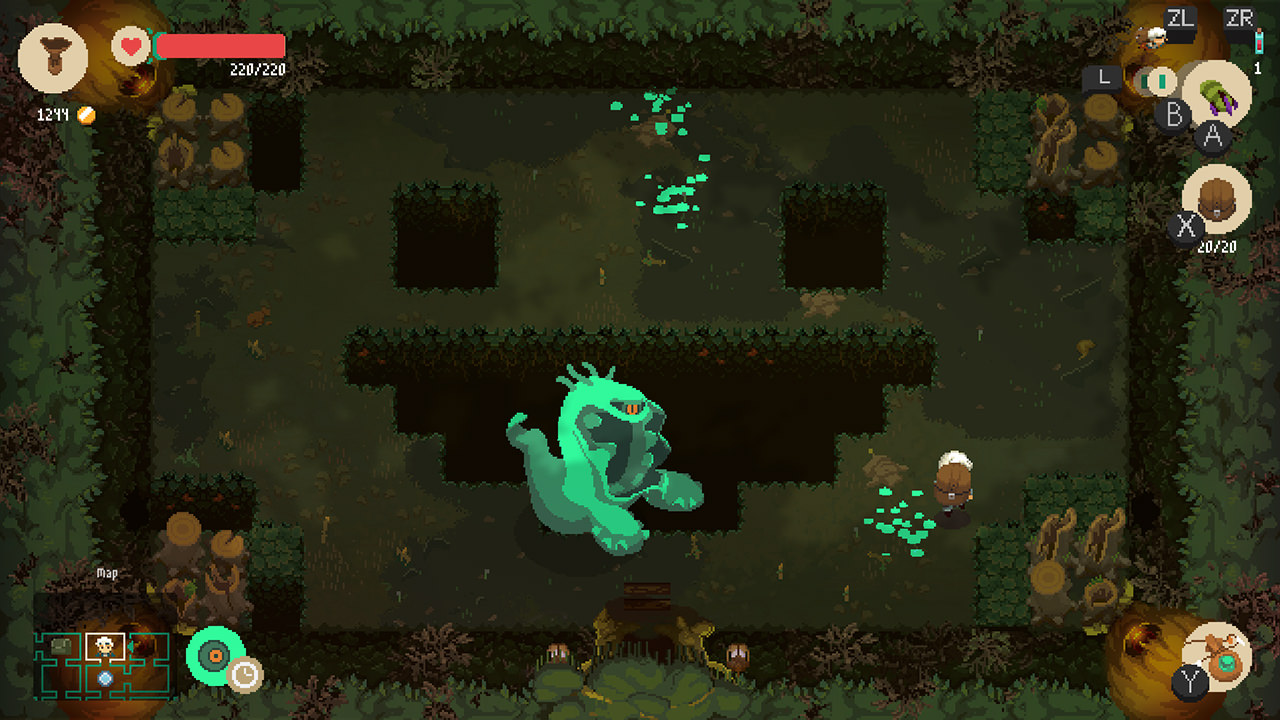 The main conceit of Moonlighter is that players run a shop you would normally come across in any other RPG. The you sell in your shop are found in the game’s randomly-generated dungeons, of which there are a handful, and you must set the prices for each item that you sell. Set a price too high, and potential customers will scoff and saunter away. Nobody in the game tells you how much an item is worth, so it’s a good practice to price high and reduce the price when people don’t buy it. You also have to be weary about flooding the market with too many of any particular item.

The gold you gain can be used to purchase upgrades to your shop, like more space to sell in, and also open up specialty shops around town that are run by NPCs. At these specialty shops you can use materials and coin to upgrade weapons and armor along a linear path, and load up on potions for longer stretches of dungeon-diving.

And… That’s about it for the shop mechanic. It’s really just a drawn-out way to sell loot that you find within the game’s dungeons, which is where most of the time in the game is spent. Unfortunately, the randomly-generated dungeons aren’t anything to write home about.

The initial reveal of Moonlighter billed it as a Zelda-like game, which piqued my interest because I absolutely love all the Zelda clones on Nintendo Switch. It may be my fault for buying into that, but the final product that Moonlighter wound up being is hardly a Zelda clone at all — this is a by-the-numbers roguelike with randomly-generated dungeons that lack any puzzle solving or imagination. 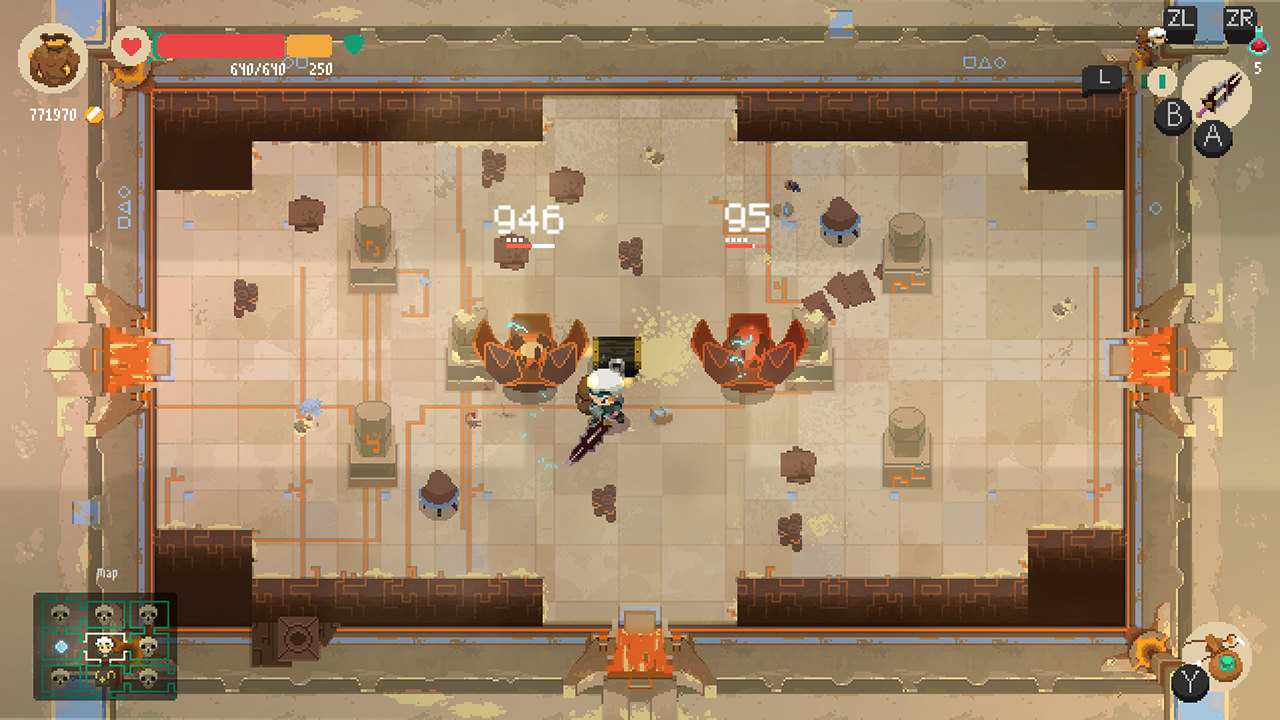 Like The Binding of Isaac, players move through dungeons in a room-by-room, Zelda 1 style, and must defeat every enemy in that room to unlock the doors that lead to other rooms. The goal is to get deeper and deeper into the dungeon and collect more rare loot to either sell or craft into better equipment. You can even sell the loot you pick up through a menu screen while you’re dungeon crawling and just never bother with the bare-bones shop mechanic (you may get a little less gold, though). Each floor in the various dungeons are pretty long, much longer than the floors in The Binding of Isaac; however, Moonlighter doesn’t make you start from scratch when you die, you just lose whatever loot you’ve collected on that specific dungeon run.

The biggest problem I had with Moonlighter is that the dungeon crawling is just plain boring. Without the fear of losing all progress like in many other games in the genre — which you can also play on Nintendo Switch — there’s not much sense of urgency in Moonlighter. So what if I die? It’ll just respawn me at the start of the dungeon, and I can just collect more loot again. Or if I’ve found something really valuable, like a rare piece to upgrade my two-handed sword, I can simply warp out of the dungeon, store it away, and then jump back into the crawl.

The randomly-generated nature of the handful of dungeon types in Moonlighter really hurts it as well. I feel like a lot is lost when maps are randomly generated. There’s no soul here. And there definitely aren’t any puzzles or exploration that requires spacial awareness. To their credit, games like Dead Cells are able to do this to great effect, but that isn’t the case here. Moonlighter could have been something really special if the shop management had a bigger role, and there was a real hand-crafted world to explore.

Disclaimer: A review code for Moonlighter was provided by Evolve PR.

With so many fantastic roguelike games already available on Nintendo Switch, it's hard to recommend one that doesn't do anything particularly well. The pixel art is nice to sit and look at, at least.