by Devin on February 4th, 2019 in Nintendo Switch Reviews 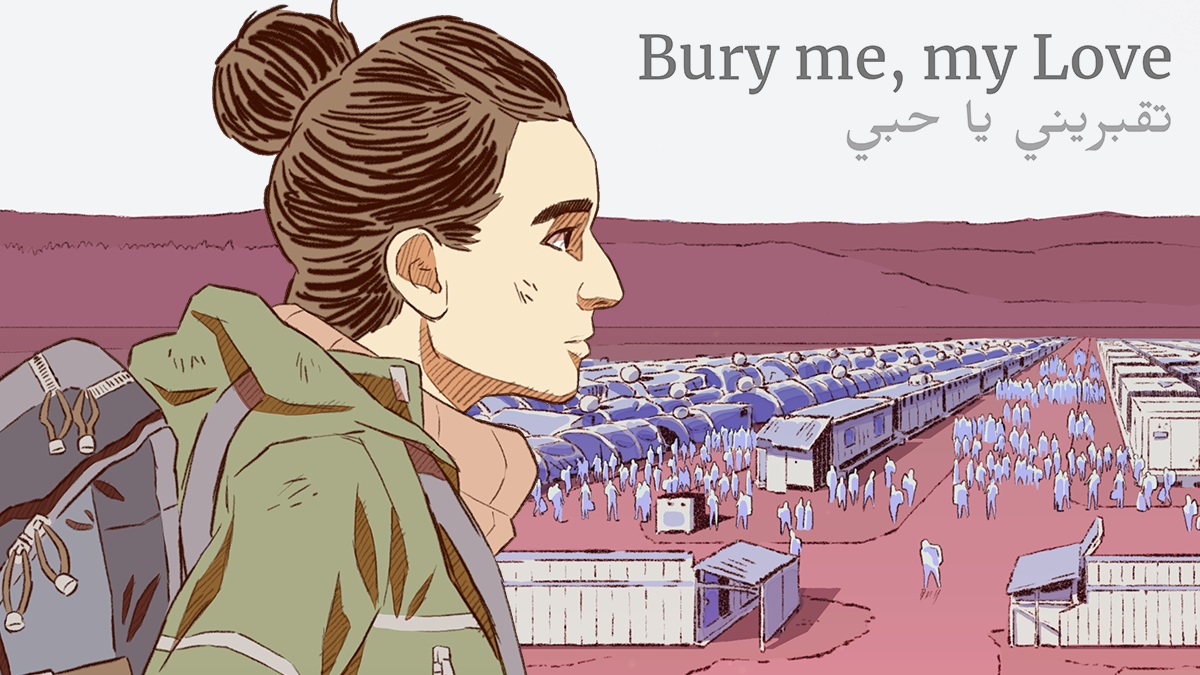 Bury me, my Love is a project by developers The Pixel Hunt and Figs. This is a story based on the real lives of refugees searching for a safety. The game is described as an “instant messaging adventure.” A new addition to the Switch, Bury me, my Love, has been out as a cell phone game since 2017.

In Bury me, my Love, you play as Majd, a concerned and loving husband communicating with your wife, Nour, as she flees war-torn Syria for a safer life. The game is played as a text communication between Majd and Nour. The interface is that of a cell phone app like Whatsapp. There are text alert sound effects, and the background changes based on photos sent in game. The art is beautiful, with light colors and impressive detail.

The player is forced to make choices that will change the course of Nour’s life forever. Sometimes you just choose a particular positive message to send to your wife. Other times, though, you have to tell her what she should do next. Should she trust a smuggler, should she stay with a crowd? Each step of Nour’s journey is fraught with stress and danger. Majd is helpless, in Syria with his family, waiting for Nour to be able to text him back. 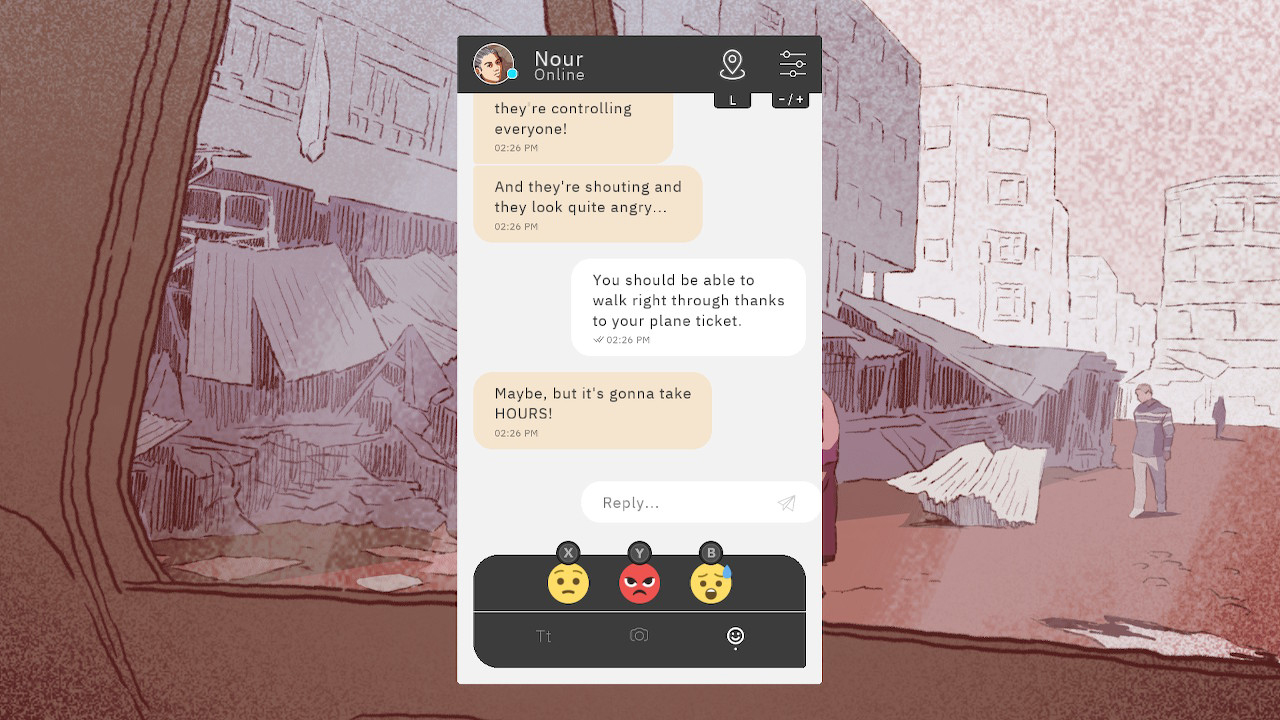 Sometimes a dead phone battery will keep him awake, wondering what Nour is experiencing. As the player, you, too, feel helpless. A dark screen will tick by the minutes between long patches, and you hope against hope that those three little dots that mean Nour is typing come back.

There are a number of branching paths, some that all eventually lead to the same place, and many that lead somewhere completely new. There are 19 endings, some neutral, some good, and some devastating. The little things you say to Nour mean the difference between life and death. When, instead of a text an audio clip comes up on screen, your heart may skip a beat. To see the words is one thing, but to hear Nour fearfully telling you she’s being sent away, or not sure what comes next, is another.

The Differences on the Switch

Bury me, my Love, was originally developed as a phone app. The Switch version brings a more quick pace to the game. In the original, the game is to be played in pseudo real time. If Nour says she has to go for a few hours, it’s a long wait until you get her next message.

On the Switch, however, the game is more free flowing. You get the impression of time passed, but you don’t have to wait. This mechanic makes the game hard to put down. Especially in stressful situations, you just need to know how it ends. This adventure is so well made, like a thrilling choose your own adventure story, that you want to keep reading and understanding the story. Instead of playing for the experience of the texts coming whenever they may come, you are playing simply for the story. 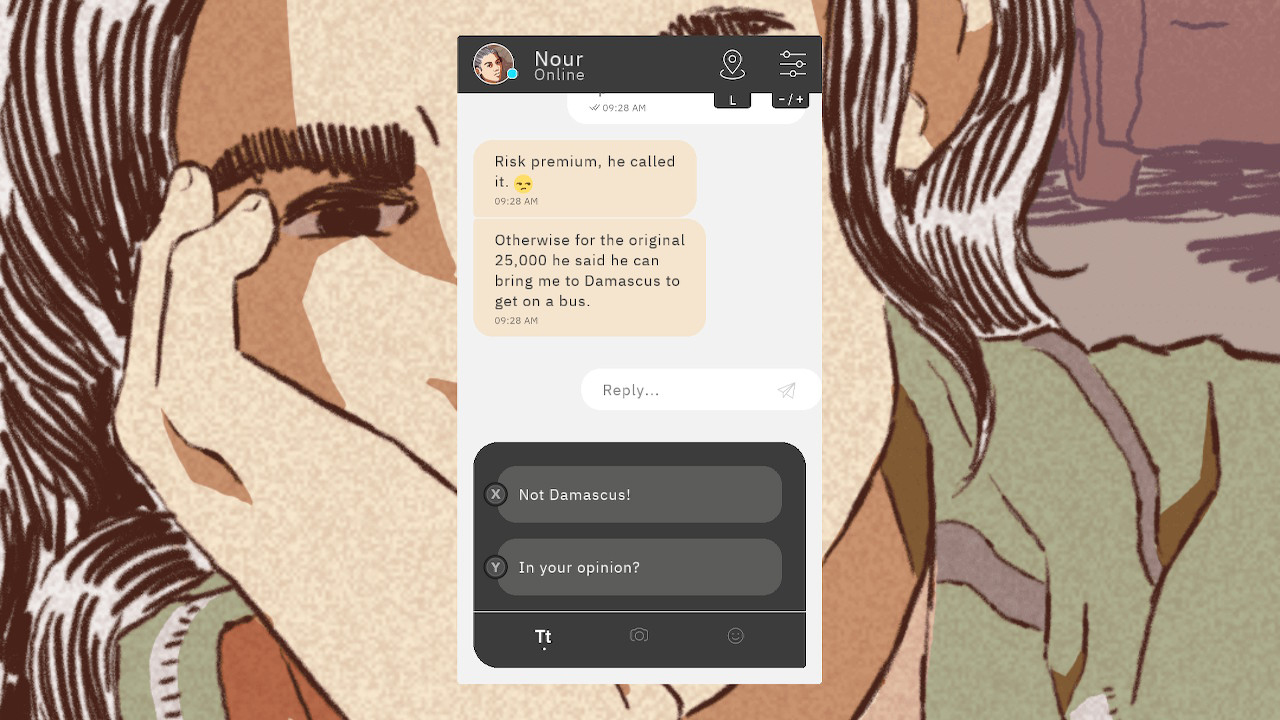 This brings the one frustration of the game on the Switch; because you can run through it as quickly as your attention span will allow, you may need to restart the game soon after starting it. Without being able to skip ahead through Nour’s side of the conversation (you can advance quickly through Majd’s), it can get tedious. Instead of trying to relive the story and see how tiny changes affect Nour, you just want to take the easiest path towards success. The use of the screen or joy cons can also be a little clunky at first; and in a game where each choice means so much, you don’t want to accidentally hit the wrong option.

The more you play, the more the role playing aspect of the game hits you. You truly begin to think how you want Majd to think, to evaluate how he would really say things. Sometimes, an angry emoji is all there is to say. Other times, you want to add your own option; “why won’t you listen to me?!” when Nour chooses her own path.

Therein lies the beauty of the “choose your own adventure” style of play in this game. You can only have so much control over the story. Sure, you can tell Nour what to do. Sometimes, though, she isn’t going to listen. As the player, you only have so much information, only what she chooses to share. Sometimes, she will even outright lie to you. You control the story, certainly, but add Nour’s own personality to the terror and unpredictability of her journey, and you don’t feel very much in control at all. 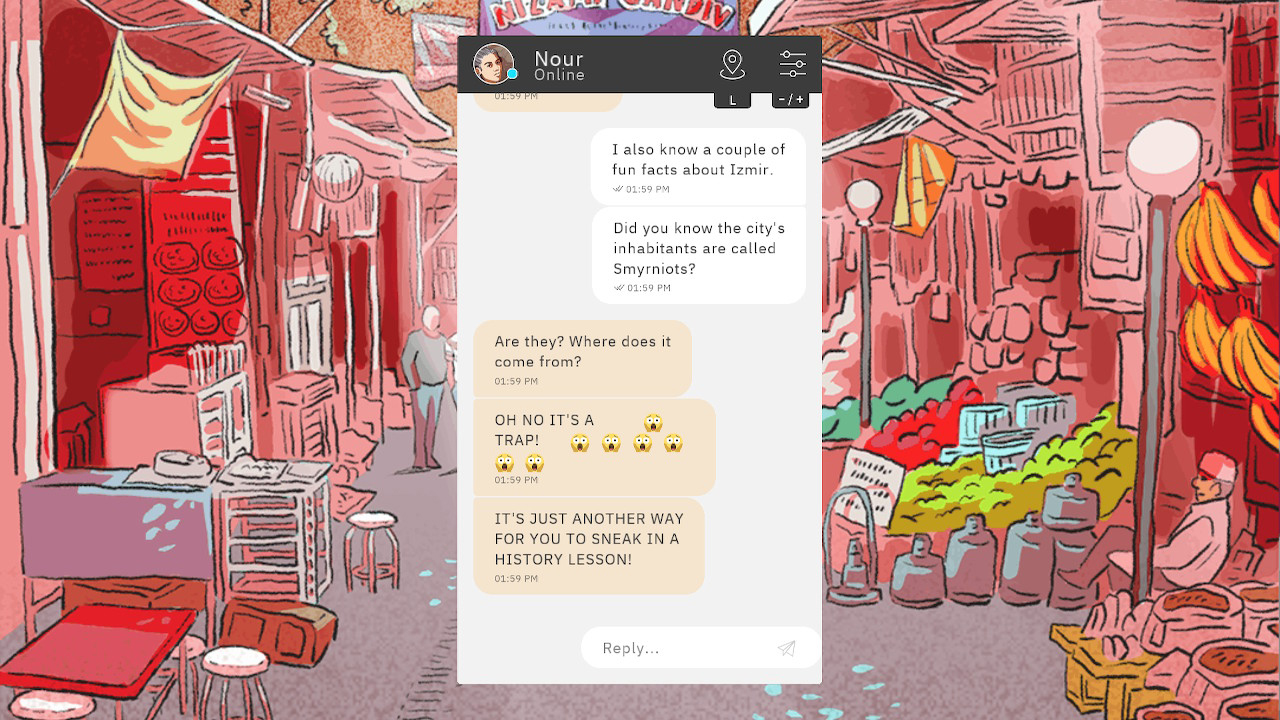 The immersion here comes from Dana, the very real inspiration behind the game. She was interviewed by Le Monde,a French newspaper, and her tale and screenshots of text (the story is in French, but scrolling through Dana’s messages is still intense) inspired the game. There are many more stories than just Dana’s that went into creating Nour and Majd. Many experiences were told to bring you a robust and intense story.

To see the emojis, just like you and Nour may have sent when talking about what you had for lunch, the “good nights” that come before a day you don’t know if your love will see the end of- it can be heart-wrenching. You grow so attached to Nour and Majd. You see them like they see each other- married people with their flaws and their little arguments, but with the love to push through. “Bury me, my love” is a Syrian saying that means, essentially, “don’t you dare die before me.” Majd says this to Nour before she departs on her journey- and you have the chance to let her keep that promise.

Disclaimer: A review code for Bury Me, My Love was provided by Future Friends Games.

Bury Me, My Love is Incredible

Bury me, my Love is a must play. Even if you know a great deal about world events, the story of Nour's flight to safety, hearing the pain and struggles she goes through, just to make a better life, will teach you something new. Her tenacity and courage will amaze you. To know, too, that this is based on the real stories of real refugees makes even more of an impact. Nour's story is one that needs to be told, over and over again, no matter how it ends.

The repetitiveness of game play that the Switch brings would not be as much of an issue as in the original app version of the game. However, the Switch allows you to spend much more time with the story at once. Both methods of play are valuable additions to the story. At $5.00 on the Switch and $2.99 on both the Apple and Play stores, you could pick both versions up.