by Link-NM on February 22nd, 2019 in Nintendo Switch Reviews 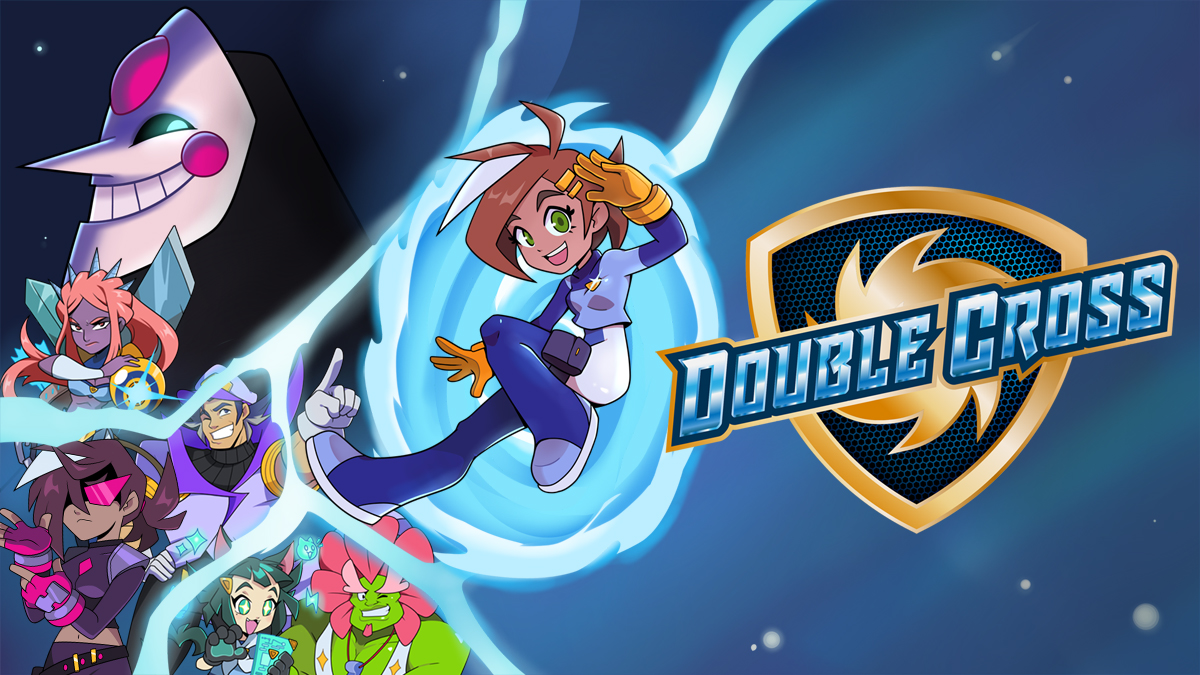 Double Cross is a new action-platformer game developed 13AM Games, the makers of Runbow. With this new game, though, the team decided to focus on a single player adventure instead of a multiplayer one.

With a whole new story to tell and new cast of characters to introduce, Double Cross is an action platformer game which tells the story of Zahra Sinclair, an agent of RIFT. RIFT is an organization that makes sure everything goes ok between different dimensions. And everything actually seems to be ok at the start until the actual RIFT headquarters is suddenly attacked. After solving the situation and encountering the mysterious Suspect X, the game’s plot becomes obvious as you’ll have to go through three different dimensions to solve the new case and identify who is trying to attack RIFT. 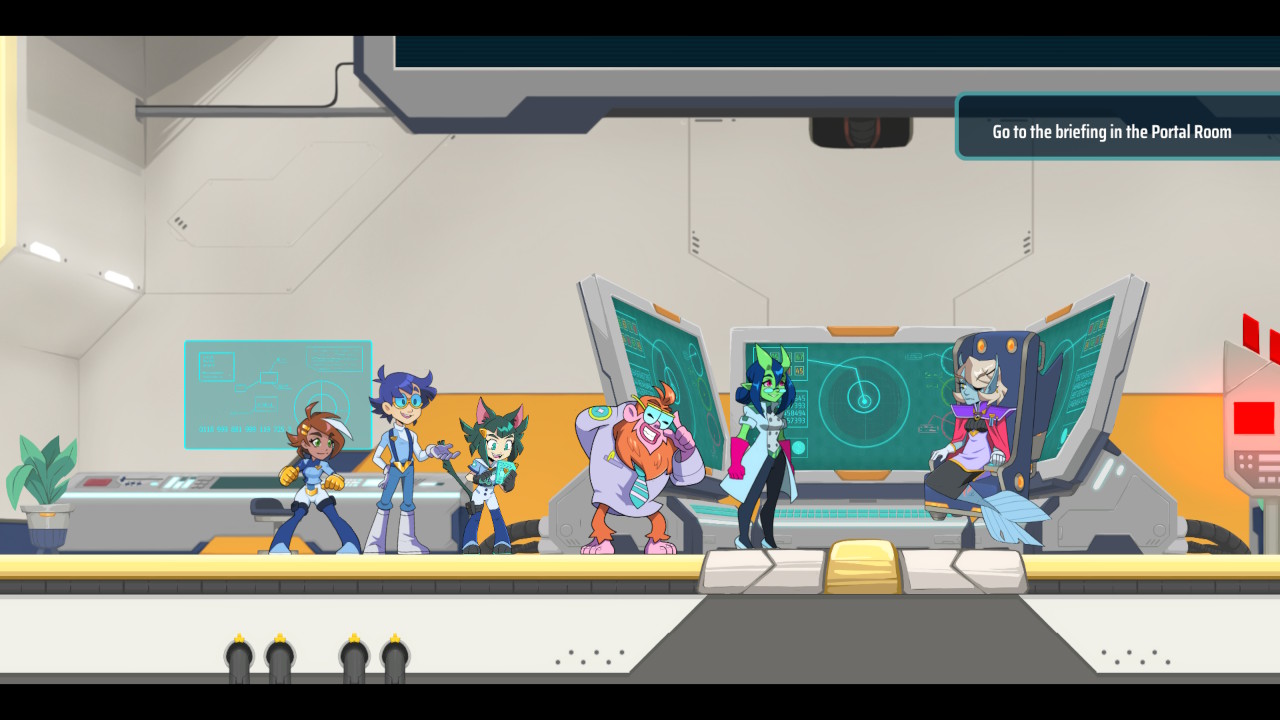 If you’ve played Runbow, you’ll immediately notice that Double Cross‘s basic gameplay is pretty similar to the one from that game. The way the main character feels when running and jumping is pretty much the same as it was back then. It feels a bit floaty but it’s something you get used to very quickly. Zahra also comes with new moves, though. Your main way of attacking are with a weak and a strong attack buttons. When you start, these two buttons only do weak and strong punches, but you can learn new moves as you play the game and find certain hidden items through the levels. Additionally, you also have the ability to dodge, do a power blast attack, do an area attack, heal, and grapple. Each of these is set to their own specific button and the last one is one of the main gameplay features of Double Cross.

Besides the usual health bar, the game also has an energy bar. This determines which special abilities you can use, which can be healing, the area attack, or the blast attack. It’s worth to mention that this is the only way you can heal in the game, so getting energy is important too. Thankfully, it’s also easy to get. Every enemy you defeat gives you small energy orbs which you can collect by getting close to them. You can also get energy by properly dodging an enemy attack. I never really needed to use the energy for anything else besides healing as the regular weak and strong attacks were enough. And sometimes, even healing isn’t needed if you are careful enough while playing, specially during the first easiest levels of the game.

One of the featured mechanics of the game is “grapple” mechanic that I mentioned earlier, called the Proton Slinger. When using this tool, the game slows down a bit while you aim for something to grab to that is close to your character. You can do this while being on the ground or while jumping. If you hit specific background objects, you’ll be able to throw yourself in the direction of that marker. This mechanic feels a bit like throwing yourself in a sling-shot and makes for speedy movements while traveling stages. It’s a fun addition to the way you can move through the game and adds variety too. A few of the challenges during the levels will also depend on your reflexes while using the Proton Slinger on the air. Besides this, this feature can also be used to grab certain projectile items from enemies and then use the Proton Slinger again to throw them back. This is useful to hit enemies that may be far from you or just to make your combat more fluid and fancy looking. 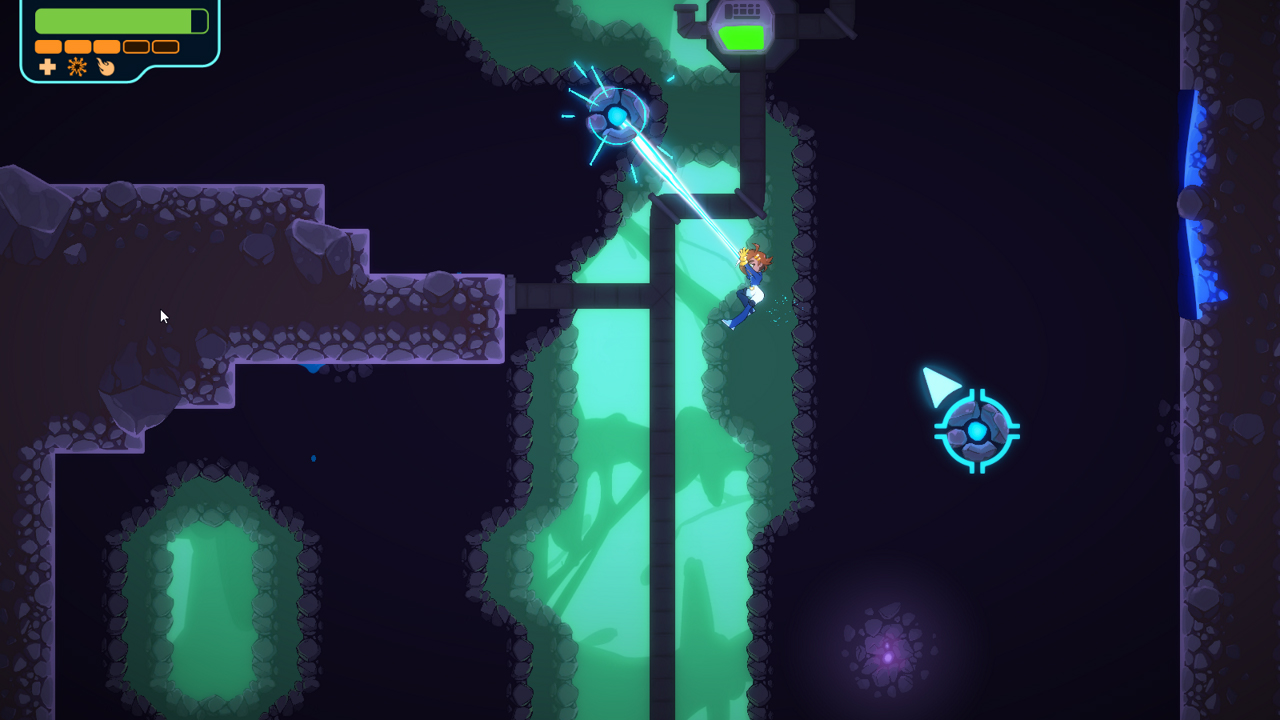 The game is divided into three different worlds called dimensions, each of them has three levels and a boss level. You can choose to play any level you want in any order except for the boss battle one. The boss battle one unlocks only after you’ve cleared the three regular levels of that dimension. All of this is accessed through the RIFT headquarters, which acts as a hub where you can explore and talk with the other characters for hints about the investigation.

While playing through the game’s three dimensions, you’ll encounter hidden items called Upgradiums. As the name says, these crystal looking items help you unlock more abilities for Zahra. There’s two types of upgrades you can unlock: permanent ones that are always enabled and ones that you can enable or disable at any checkpoint. The upgrades can be stuff like extra moves, bigger energy meter, more health, or stronger moves but weaker defense. These let you customize the experience you have with the game with the option of making things more challenging or accessible in a natural way.

On the graphics side, Double Cross features 2D HD art for sprites and character portraits used in their simple cutscenes. The game’s art is a bit of a mix between Japanese and western animation, with colorful and fun characters and backgrounds that are simple but enjoyable to see. The game runs smoothly too and in HD. 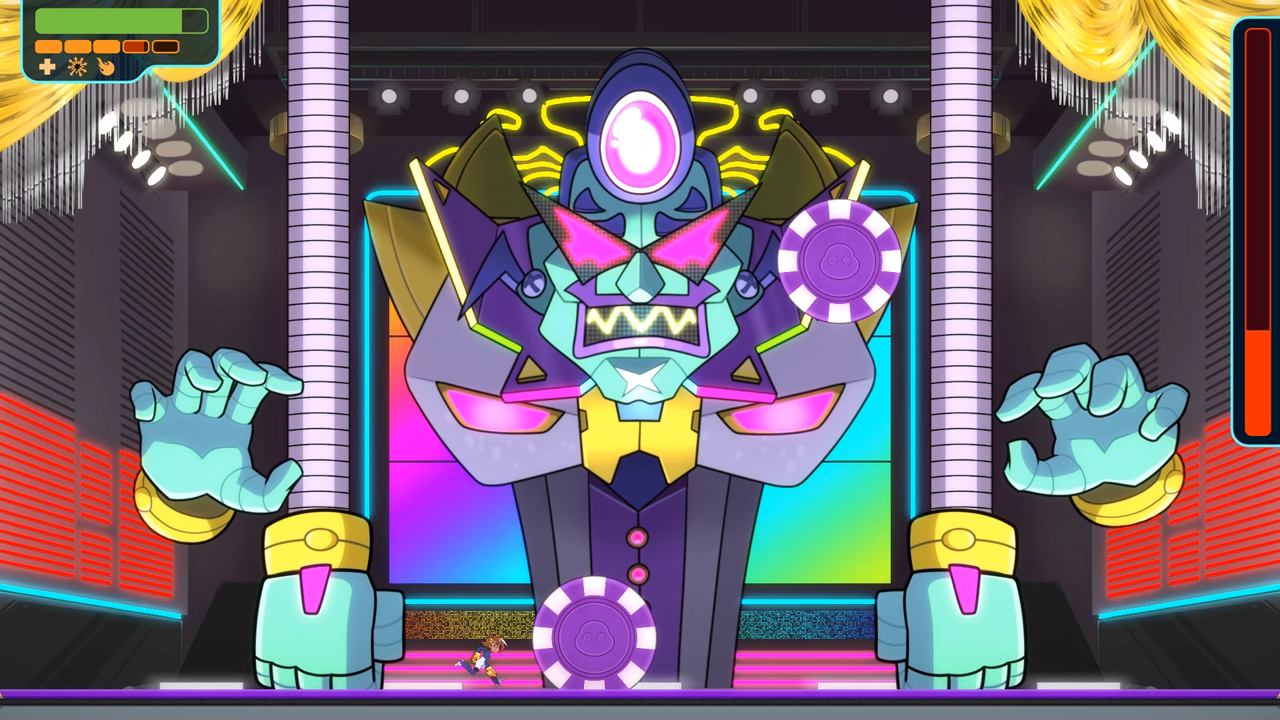 The game’s music is simple but gets the job done. It’s nothing that you’ll really remember or hum except for a few certain levels where the music is a bit more catchy. The sound effects are ok too. There is no voice-acting but Zahra and the boss characters do small grunts when doing certain actions.

Sadly, I also need to mention that I encountered three glitches while playing the game. While one of them is related to sound and gets fixed by itself without really affecting the game’s progress, the other two were bugs that forced me to restart the level I was in. Fortunately, it seems that these glitches have been reported already to 13AM Games and that a patch is already in development.

Disclaimer: A review code for Double Cross was provided by the publisher.

Double Cross is a good game and an almost great game. Highly recommended if you're looking for an easy to play but really enjoyable platformer. It has a good balanced challenge that makes it accessible to anyone. It has an achievement system too and records your best time for every level, so you can easily challenge yourself to get the best times. As a plus, the small story and different characters are fun and interesting too.