by Jack on February 28th, 2019 in Switch Era Talking Points 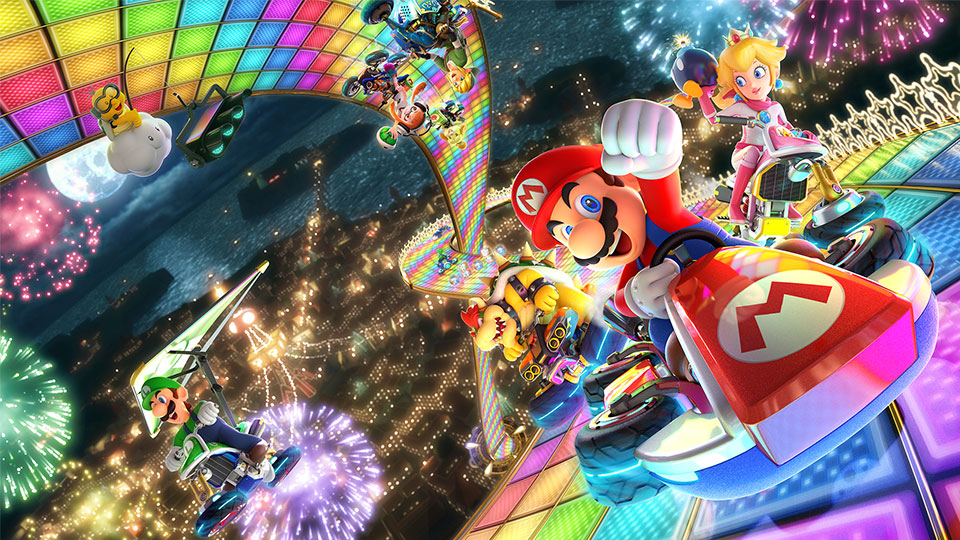 Mario has certainly spent a lot of time doing more than just jumping on Koopas and Goombas. Playing Tennis, having a Party, playing some Basketball and even taking part in the Olympics, Mario has starred in numerous spin-offs with varying results. However there is one spin-off that has stood out from the rest. A series that is universally loved, one that can drive you crazy from its infamous blue shells and make the best of friends fierce enemies. That series is of course Mario Kart.

The series has always maintained a great amount of critical praise and enjoyed overwhelming commercial success. To this day the Mario Kart franchise has sold well over 100 million copies. In fact Mario Kart Wii shipped a staggering 37 million units and MK8D on the Switch has sold a healthy 15 million.

So as we wait for the inevitable Mario Kart 9 for the Switch, I think it is time to rank the top 10. Now some may question how we can rank the top 10 when there aren’t, but truth be told there are actually 13 Mario Kart games. As there are a few that have been released for the Arcade. So lets begin: 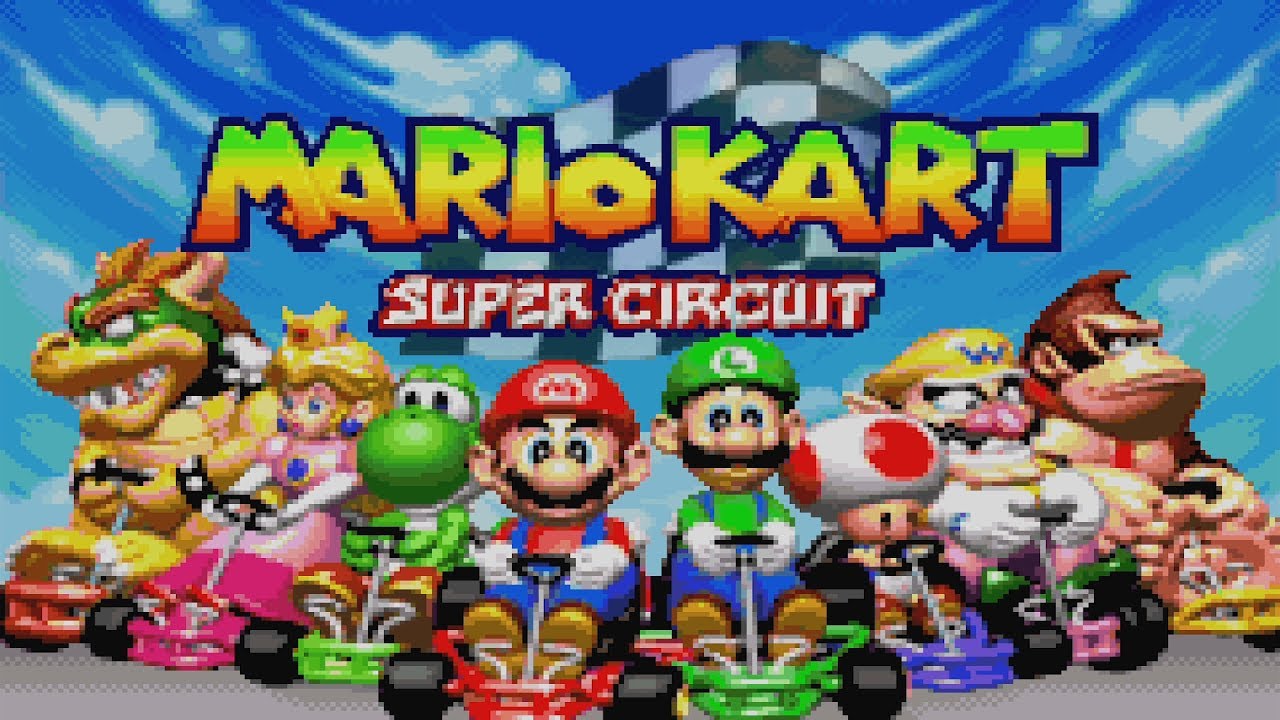 Super Circuit is an excellent attempt at capturing that Mario Kart magic on the GBA, but due to hardware limitations it suffers.

Of course it offers multiplayer and Nintendo even allowed for multiplayer with just one cartridge, but friends needing their own GBA and link cables made the experience a bit of a hassle and that isn’t even taking into account the fact the GBA didn’t have a rechargable battery.

It did offer a great amount of tracks for a GBA title though, but when four of those are Bowser’s Castle, you can start to feel the fatigue. 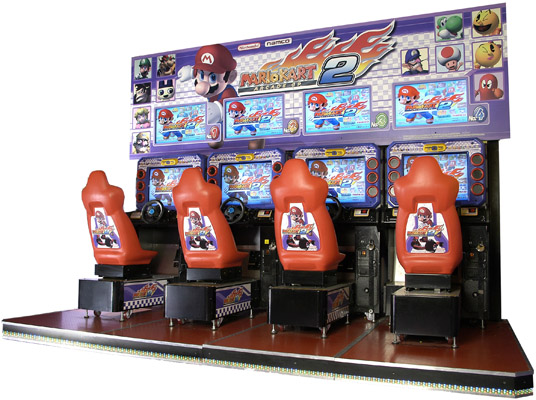 Before Pac-Man received his invitation to Super Smash Bros he was racing alongside Mario. For the most part the majority of the Arcade titles are developed by Namco, but have Nintendo step in to ensure quality control.

GP2 does everything its predecessor did, but adds more. More racers and the choice of the standard Kart of their own unique one, more courses and more items. Its biggest issue is the fact that it can only be played in arcades, making it tricky for the average person to experience it.

Unlike other MK games the cups in GP only feature two tracks. However, once you’ve raced through these tracks you then race through them again with some changes to shake things up a bit. 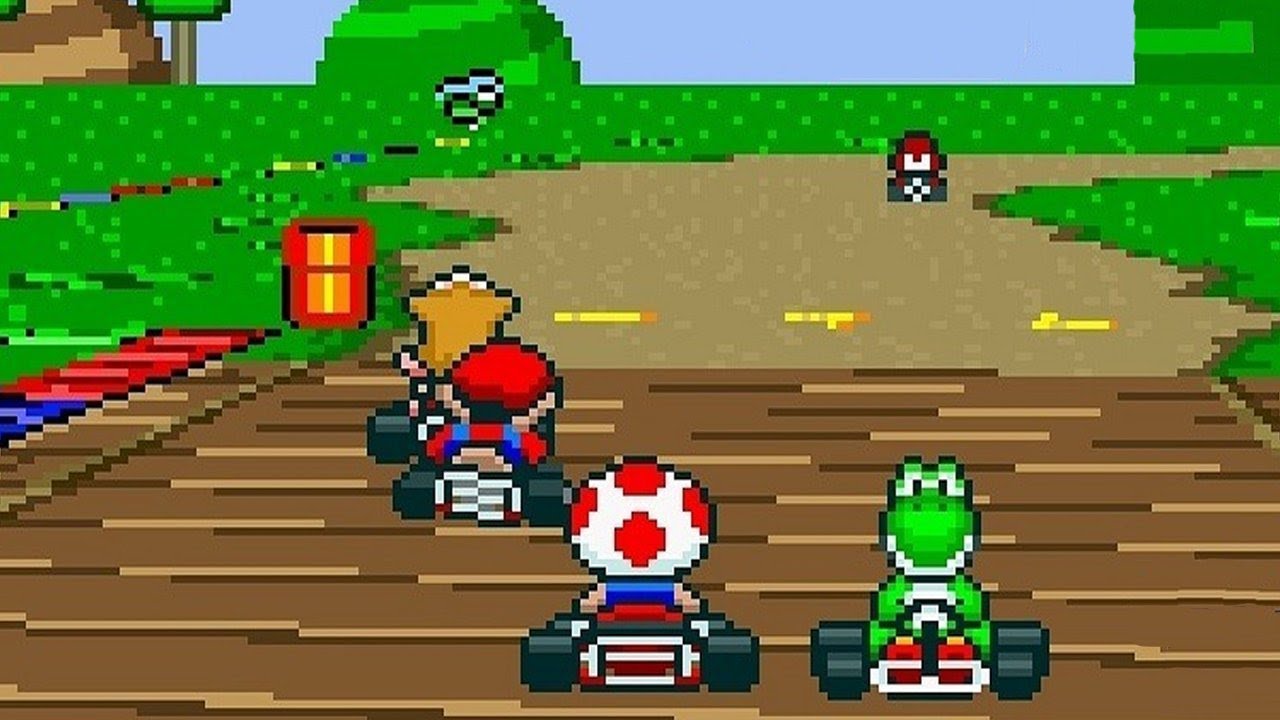 The game that started it all. Super Mario Kart was a massive success when released on the SNES and is the fourth best selling game on the system. Perhaps if it was never released we’d still have F-Zero games as it seemed to totally eclipse Captain Falcon.

Featuring 20 tracks, an impressive number for the time. Playing side by side with a friend from the comfort of your own home was amazing. Whether it was playing Grand Prix or trying to pop each others balloons in Battle Mode. The only real issue it has is the lack of characters and only allows for 8 in total. 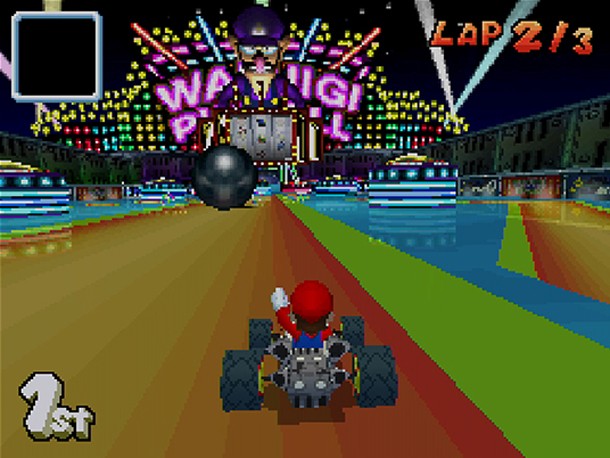 The second best selling game in the series. Mario Kart DS has sold 23 Million units! It also features two landmark additions to the series. The introduction of Retro Cups bumping up the number of tracks to 32 for each subsequent game and online, so you can race against anyone around the world.

Unfortunately the online only allowed for a grand total of 4 people in each race, but it was a step in the right direction! 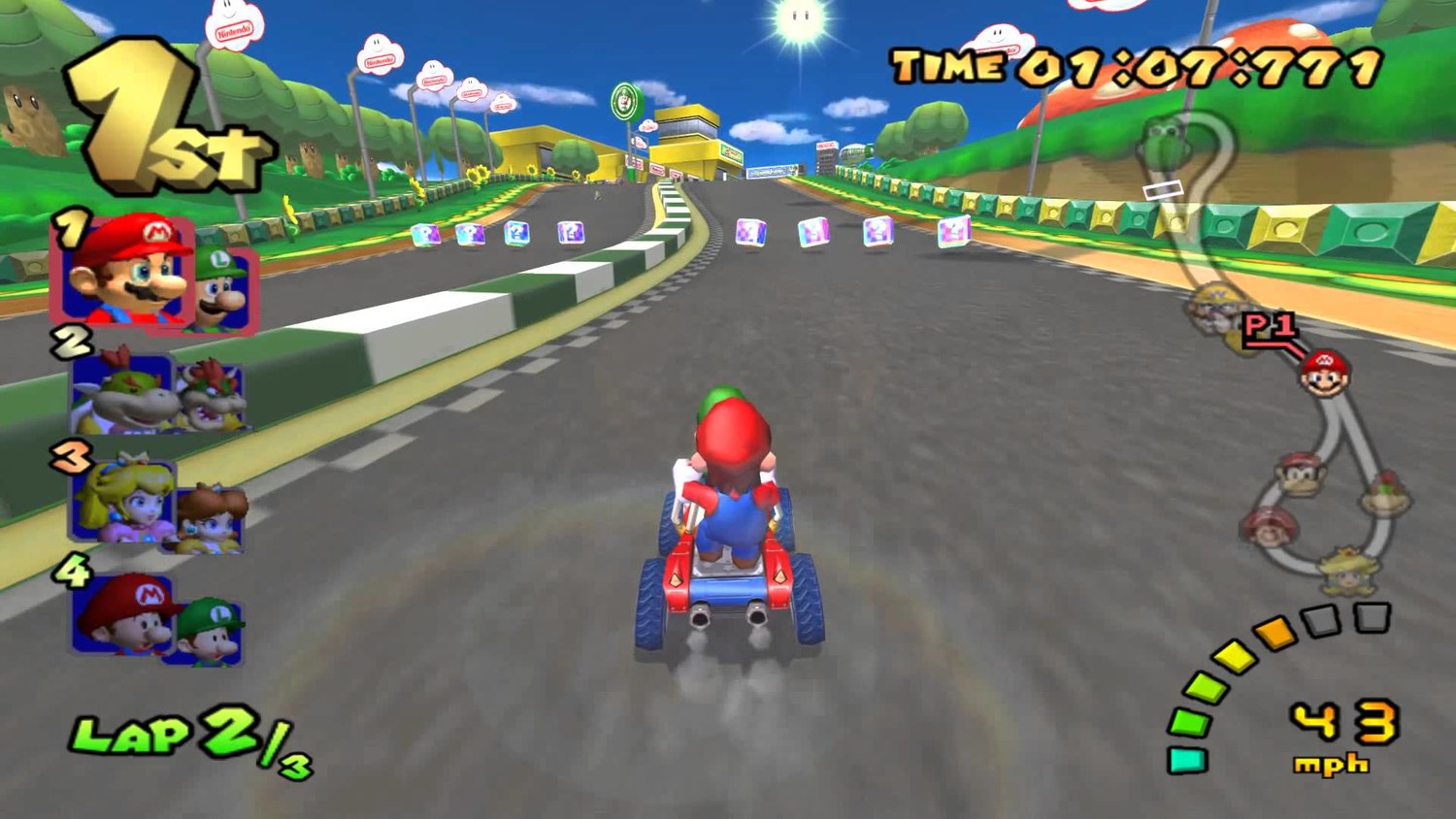 Double Dash probably introduced one of the most bizarre mechanics to the series. That mechanic being two characters in one kart. I’m not sure why this idea was ever implemented, but the game was still great overall.

The most interesting change to the formula was the choice of Kart you could race in prior to this the player simply picked their character. Characters were seperated into different weight groups and so were Karts. The weight of the characters you’d pick would influence the karts you could select. On top of this each pair of charactes (Mario & Luigi, Bowser & Bowser Jr etc) had an exclusive item only they could use. The Baby Mario and Baby Luigi had access to the Chain Chomp, Bowser and Son a huge devestation Koop Shell and many other interesting items. 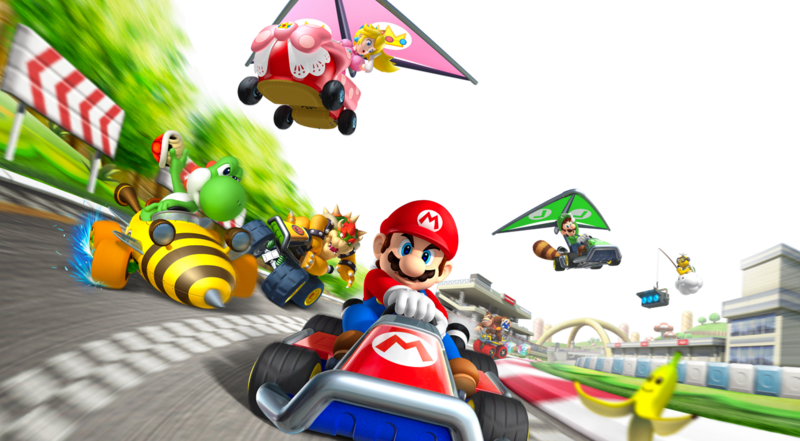 One aspect of MK7 that I love so much was the introduction of “marathon” like tracks Wuhu Loop, Maka Wuhu and Rainbow Road. Rather than having three laps these massive tracks had 3 unique sections and whoever reached the end first wins.

Unlike the previous handheld entries MK7 doesn’t feel held back by its hardware. The previous titles are great, but its impressive amount of courses and online multiplayer make it an incredible title. 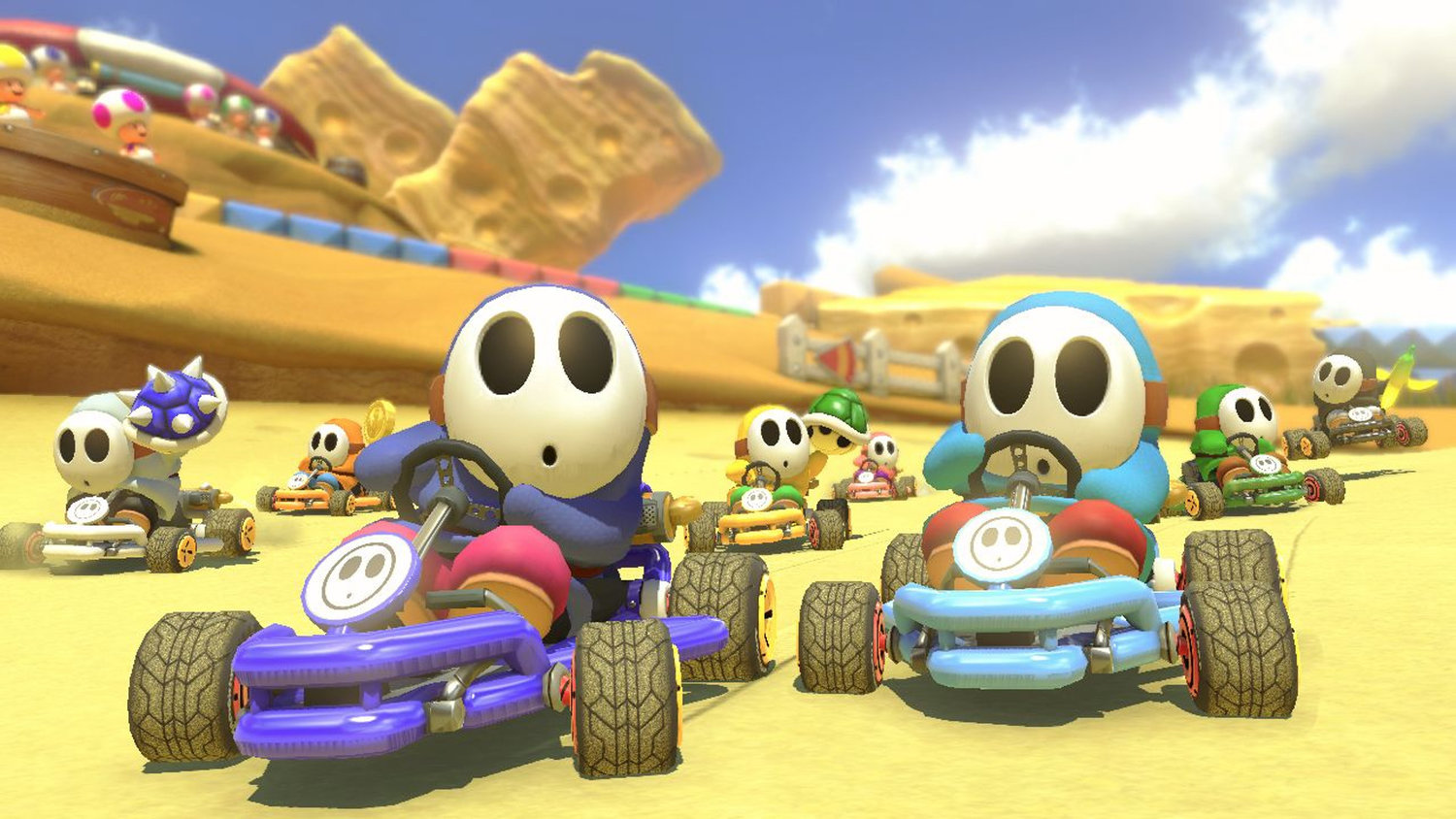 The Mario Kart game that seemed to confirm that F-Zero was never coming back due to the introduction of zero gravity sections. MK8 may not have had the best home on the Wii U, but that didn’t stop it from being an amazing title. In fact it is the best selling Wii U game.

I can’t say the anti gravity sections made a massive change to the formula much like the previous entries hang gliders, but MK8 is just an incredibly solid MK game. 48 tracks (If you buy the DLC), a great selection of characters… and Pink Gold Peach. The only real issue the game has is its lacklustre Battle Mode. 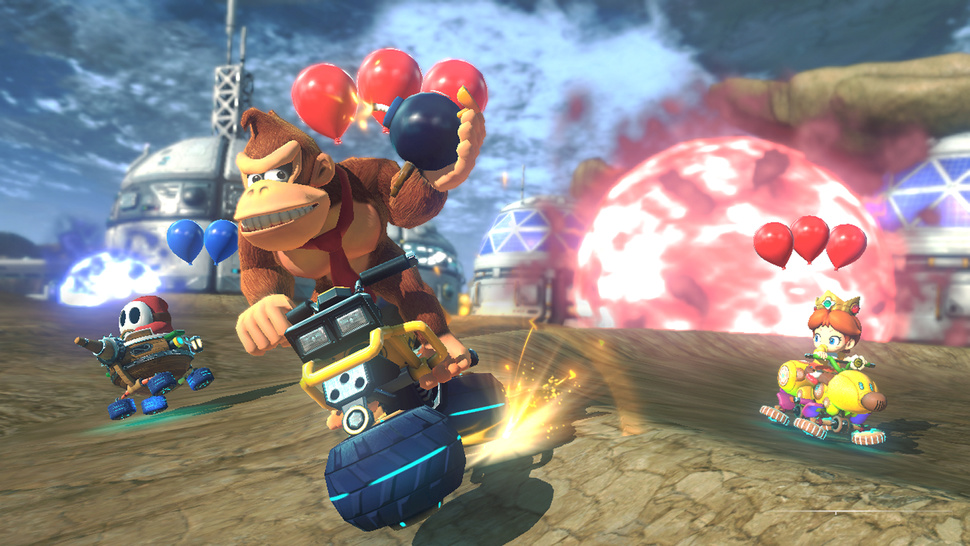 If MK8 was in the 4th spot, then it was inevitable for MK8D to be in the 3rd. MK8D does everything MK8 did, but better. All DLC in the base game, more characters, more items, better visuals and a respectable Battle Mode.

Whilst all these changes make it stand out from the Wii U version probably the biggest change to the game is the fact that it is on the Switch and can now be played anywhere at anytime! 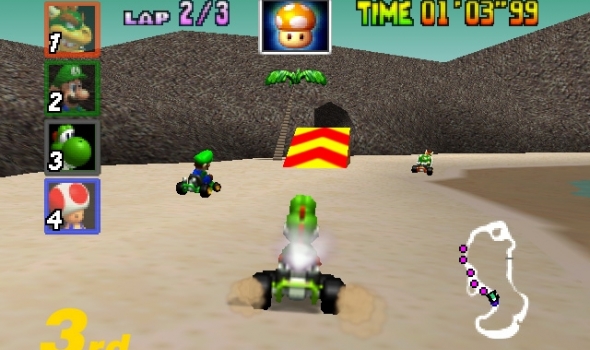 Mario Kart 64 was the first time the series could ever be enjoyed by four players at the same time and it is probably the best way to enjoy a game of Mario Kart. Online has its perks, but the cries of defeat and victory that echo through rooms all across the globe as the winner takes it all in a game of Mario Kart just can’t be matched.

It might be low on content compared to other titles in the series. As it drops the track total down to 16, but every single track is a hit and even the Battle Mode stages are some of the most memorable in the series. 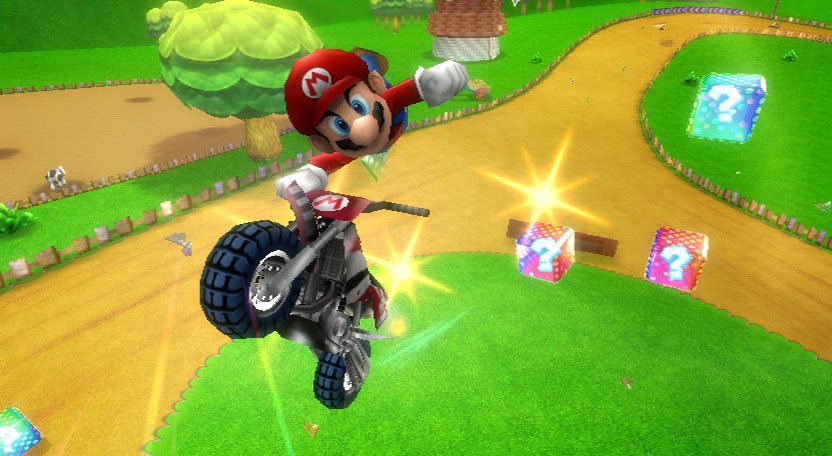 Possibly the Mario Kart game I spent the most time playing. Bumping the racer count up to 12, adding in bikes and most importantly giving the option for motion controls. Mario Kart Wii is an amazing Mario Kart title.

Everything the DS version did prior to it, MKWii does better. It isn’t just the superior online, the retro stages in MKWii just feel so much more impressive thanks to the greater power of the Wii when compared to the DS.

However my true reason for ranking MKWii the top Mario Kart game is probably due to the very active Homebrew scene the game enjoyed. The Wii was a hackers dream and Mario Kart Wii greaty benefitted from the scene. Boasting 216 tracks and an active online community Mario Kart Wii is the best Mario Kart game for me, even if for reasons Nintendo never intended.