by Cody on March 27th, 2019 in Nintendo Switch Reviews 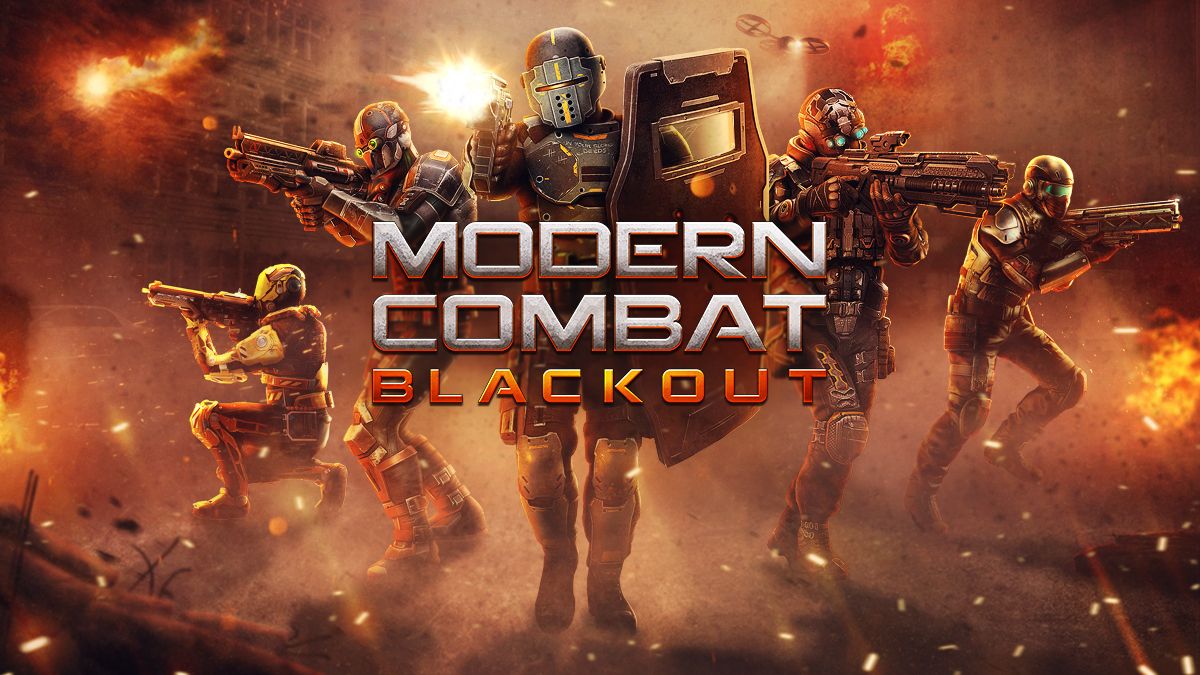 Take a look at the Switch library and you’ll see that the list of FPS games can be a little lacking. Among those how many are realistic military shooters where you’re not fighting against demons or robots? There’s very few, if not any, that specifically fit that criteria. Modern Combat: Blackout takes place in the not so distant future where the most advanced pieces of tech are drones and holograms, things that already exist, but have room for improvement. There’s a certain primal glee to just lining up headshots against totally normal dudes instead of pumping dozens of bullets into a single sponge. Call of Duty perfected the kill quick, die quick formula last gen, but is now going the wayside in favor of hero shooters and more cinematic FPS games.

Just because Modern Combat: Blackout is a mobile port doesn’t mean it can’t scratch this itch. Originally released in 2014 for IOS and Android devices as Modern Combat 5 and published by Gameloft, the game features a fair amount of content for both single and multiplayer. Soft RPG elements give the game extended replay value as you work towards unlocking guns and attachments as well as nine different classes to play. The single player campaign lasted me around four hours with a little bit of side content to spare, and I had little trouble getting into multiplayer matches. 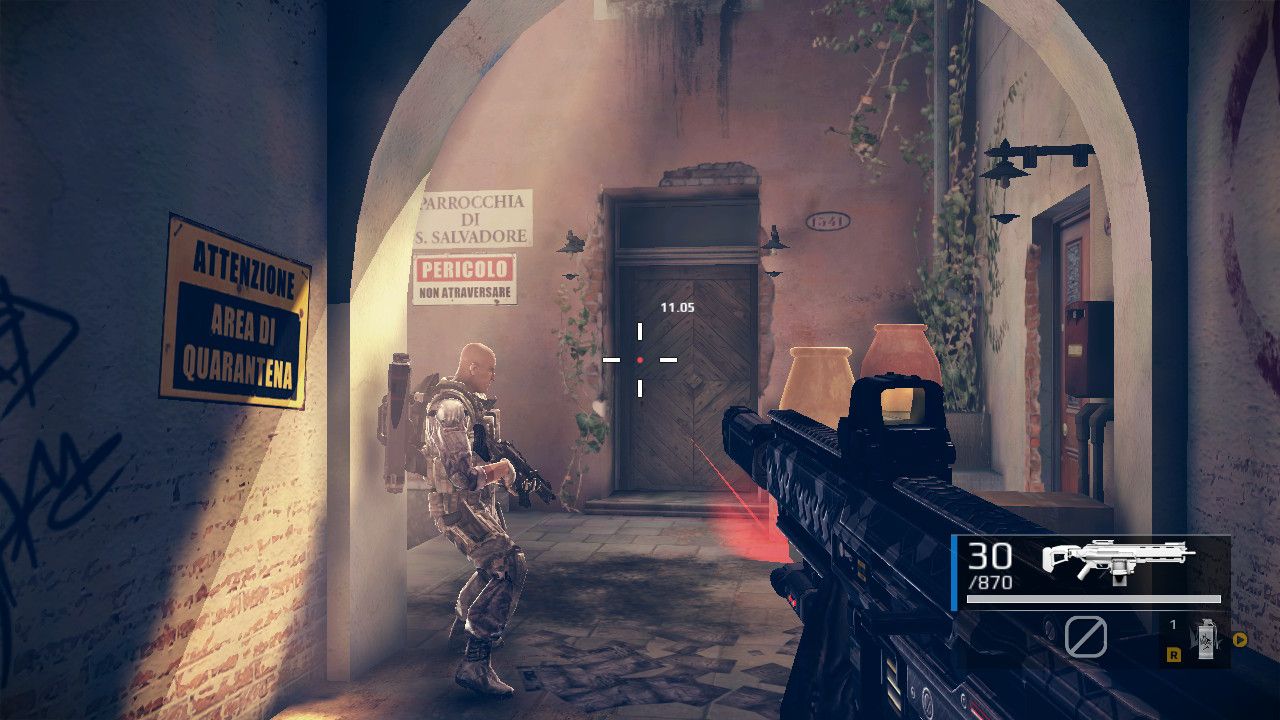 Not Exactly Call Of Duty

You play the role of Cayden Phoenix, paramilitary operative and father, trying to make the world a better place while killing literally hundreds of unnamed adversaries. You take your fight from the canals of Venice to the streets of Ryogoku, Japan, gunning on foot, in helicopters and armored cars, sniping, flying by drone, and trying not to throw up during an incredibly rough speedboat turret section.

The game at least has variety, and aside from core story missions the campaign also features spec-ops levels that range from assassination sniping missions to shooting gallery style breach missions. I had my most fun playing through the core missions however, which offer a more or less arcadey feeling experience. Rather than wide open levels, each level is a linear point A to point B crawl where you take on a handful of enemies at a time. The AI isn’t entirely competent, meaning the game isn’t exactly challenging to say the least. With no difficulty settings I had more than enough time and cover in most levels to slowly line up my headshots, but with the generous aim assist option I felt myself playing a little faster and looser than I normally would. There is also a gyro aiming option that only activates when aiming down sights, but I turned it off after a little while. Modern Combat‘s gyro aiming is just a bit too loose for my tastes, especially with precision weapons like sniper rifles. However I did find the gyro was more accurate with the Joycons than with the Pro Controller, just keep in mind that the Joycons have worse aiming on the sticks.

Moving around is quite slow however, and mobility in general is quite limited. A poor slide can be achieved by crouching while running, but it only nets you a few feet. There is no vaulting of any kind and invisible walls are plentiful. For the most part Modern Combat feels more like a light-gun game as cover takes on a much more important role than tactical movement. This unfortunately translates to a very basic multiplayer mode with a lot of standard looking maze maps with very little verticality. 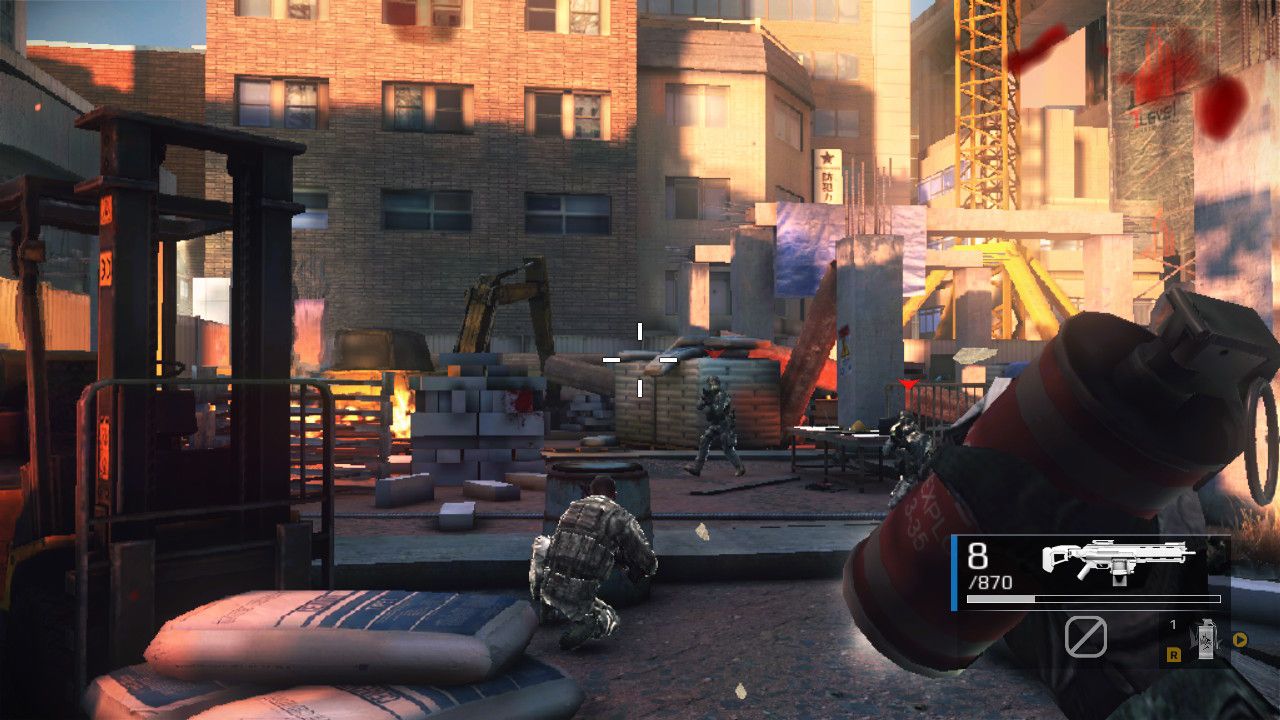 The gunplay that was at least satisfying in single player leaves a lot to be desired in multiplayer. Players suddenly can take more bullets than in the campaign, at least with the low level weapons. Unlocking guns and classes becomes a necessity to compete as each one is leagues better than the next. Grinding can be a chore after the main campaign is complete unless you really want to replay those levels ad nauseum, and playing the multiplayer under-leveled means you’re going to spend more time being shot around a corner from some dudes shoulder mounted future gun than getting in close enough with your standard issue assault rifle.

Many of the late level unlocks feel absurdly overpowered compared to what you start with, and the later weapons and classes are specifically geared towards multiplayer. It’s clear that the main focus of Modern Combat: Blackout is to continue playing online, which is a shame considering that I had much more fun in the four hour campaign. I enjoyed the shooting gallery feeling a lot more than the attempted Call of Duty clone, and after trying both I was left with a pretty crummy feeling about Modern Combat: Blackout. The graphics are clearly just cleaned up mobile assets, even down to the animated gif fire and explosions, and the story is pretty barebones even for a machismo filled action shooter. Shooting felt good enough, even if I would have liked some better, more immersive sound effects. However, the campaign levels, while linear and short, were some good old fashion arcade fun, that helped me to grit through the other, so obvious, problems. 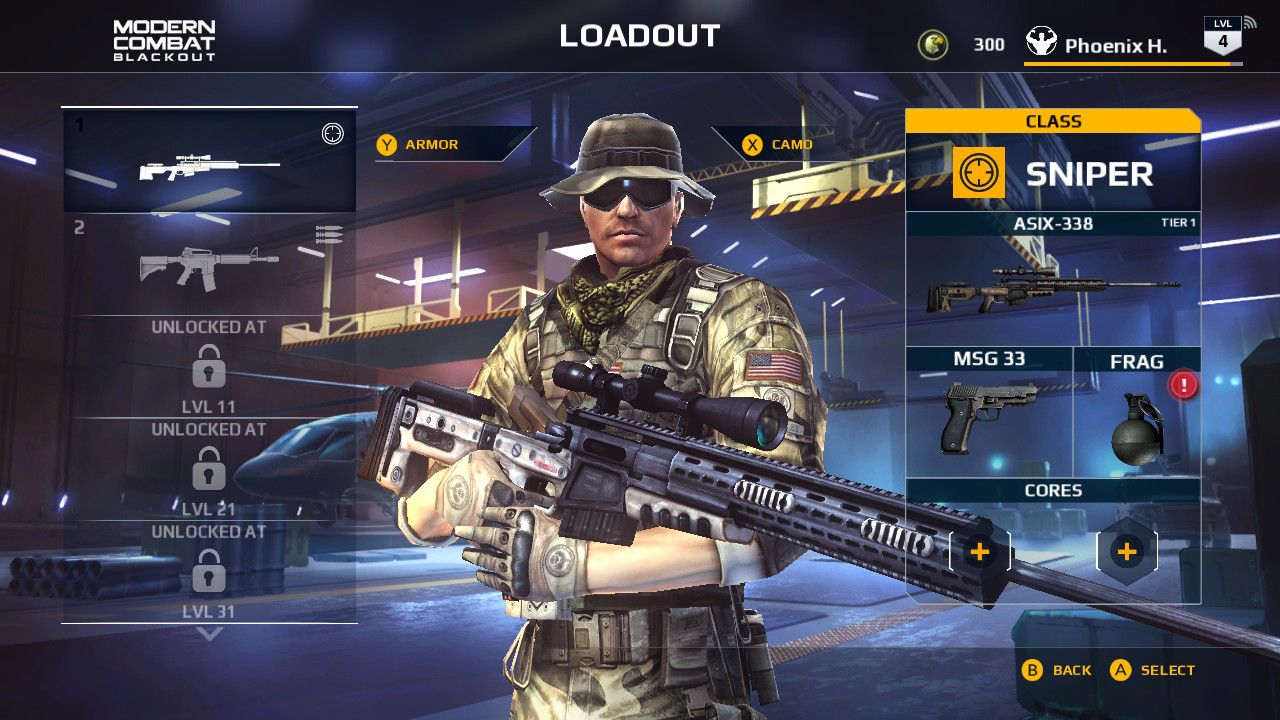 Modern Combat: Blackout is certainly no hidden gem. It’s a simplistically pleasing romp that has more than its share of technical and gameplay issues that can be hard to look over. Unfortunately part of my enjoyment was in how short and easy the levels were, and I was really just getting all of my enjoyment from progressing and popping heads. The slow movement and aggressive power curve of the unlocks makes the multiplayer just not fun. I can’t in good mind really recommend Modern Combat: Blackout, that is, unless you really really crave that modern military feeling. In that case, I can see this scratching that itch, but only if you have literally no other options.

Disclaimer: A review code for Modern Combat: Blackout was provided by the publisher.

Slow speed, poor assets, and low difficulty make this game a very tough swallow. The multiplayer favors players who are high leveled and the campaign features shallow missions. An arcade style campaign with linear missions is a silver lining to an otherwise uninteresting game, and the guns feel good to shoot, but ultimately is a short lived joy.