by Cody on April 19th, 2019 in Nintendo Switch Reviews 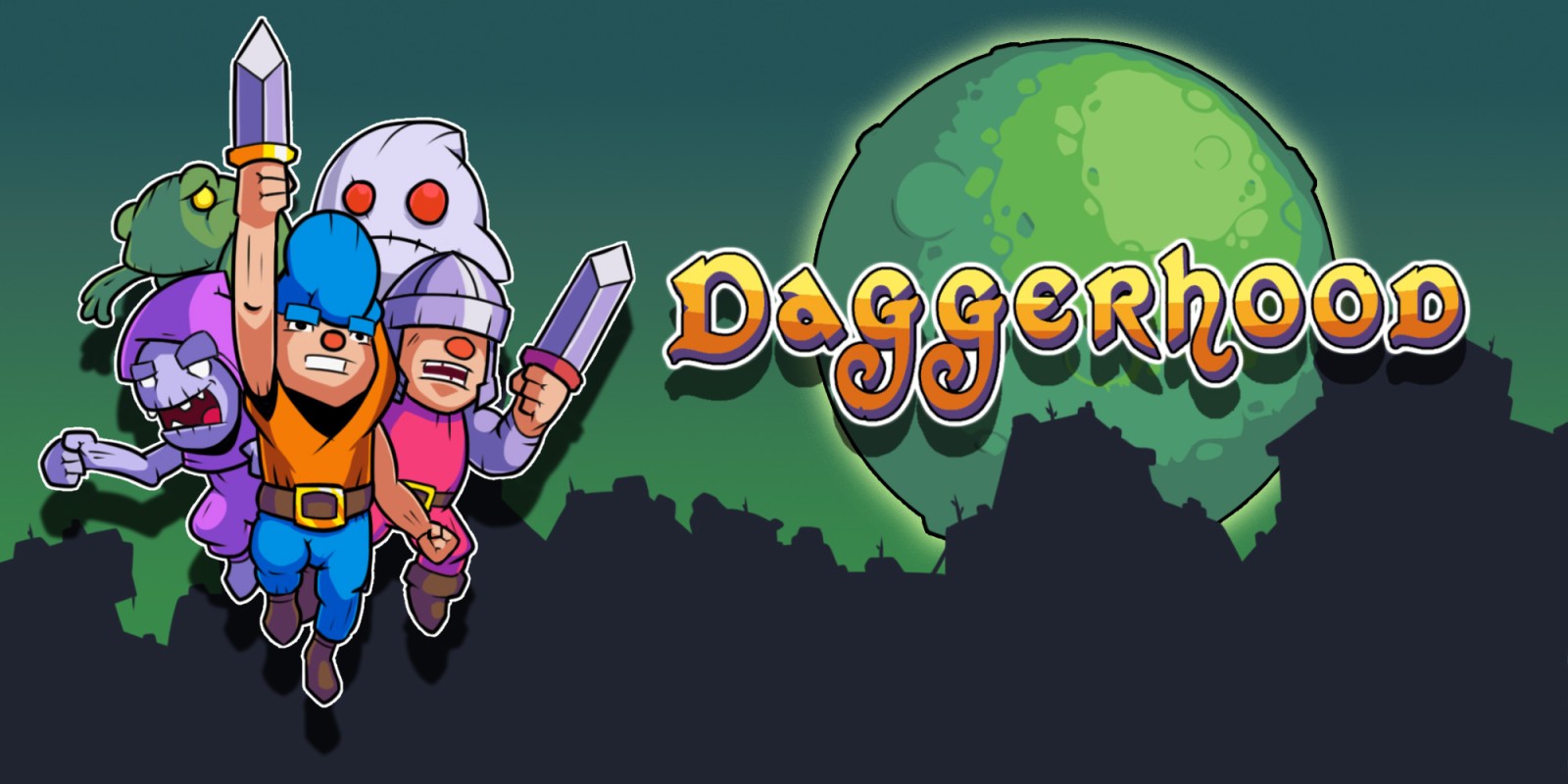 Jumping forward bouncing off walls, you throw your knife, then teleport to its exact location, but you end up landing on spikes. That’s ok though, you respawn and try again. Off the wall, throw the knife but you hit it a moment earlier, but you hit spikes again. Trial and error, its part of any platformer game. Wall, knife, hit the button a moment later than before, and more spikes. You repeat this around five or six more times. Sometimes you’re mid jump and your knife collides with a wall, canceling your teleport just over that pit of spikes. Sometimes the knife is too high and you teleport into some ceiling spikes. Sometimes your teleport is just half a pixel too forward and you hit the side of the spikes, and that one particularly boils your blood. Finally you make that jump, and lo and behold, more spikes.

Daggerhood is a high reflex platformer game by Woblyware. You play as Vincent D. Daggerhood, legendary thief with who has to work his way back into the kingdom he was literally just exiled from in order to steal directly from the king’s hoard, the very crime he was exiled for. Armed with a magical dagger that can teleport you to its location when thrown, you work your way from the caverns, to the forest, all the way back to the kings castle. 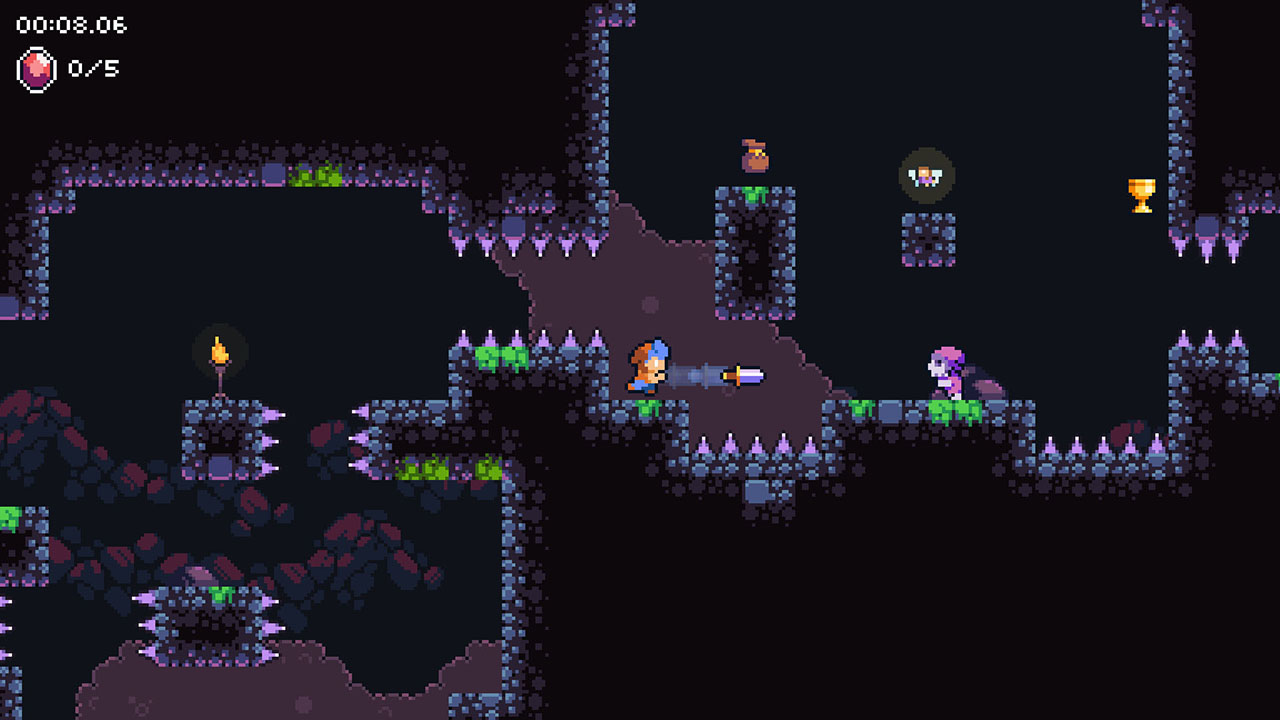 The game is a challenge even from the early levels. Obtuse jumps, narrow hallways filled with spikes, and shaky platforms let you know that Daggerhood does not mess around. Daggerhood throws all the classics at you, often in quick succession. Falling rocks, patrolling enemies, and good old fashioned spikes, literally everywhere. Even so, there are two collectibles in every level, a fairy hidden in a corner that will disappear after a set time, and a set of five treasures that serve only to make your jumps a little harder. Daggerhood also ranks you on how fast you complete the levels, meaning that you’re expected to complete each level at least three times to one hundred percent the game.

If you’re going to playing levels multiple times, you’ll be experiencing the core aesthetic quite a lot. Animations and sprite work is nice, but that gets filtered out of your brain as you restart it for the umpteenth time. The music never filters out unfortunately. The first world features one song that is, I kid you not, a 40 second loop. Meaning that if you spend an hour in that world, you’re going to hear that song in its entirety close to 100 times. The bosses have different music, except when they have no music at all. Imagine my incredible disheartening as I finally get to hear a new track at the start of the first boss only to die after a few seconds, starting the level all over again in silence.

Spikes play a role in Daggerhood beyond any other obstacle. Not only do they take up more real estate than the floor at times, but they are by far the most deadly. Your dagger teleports you, but you have to keep in mind that the dagger is physically smaller than you, and when you teleport to it, your sprite expands on the Y-axis significantly. If your dagger is too close to floor or ceiling spikes its an instant death, even on an otherwise safe jump. The spikes are everywhere, meaning that every jump requires that strict level of mental concentration that you would expect from the genre, except that it feels like Daggerhood expects you to be a timing and precision master. 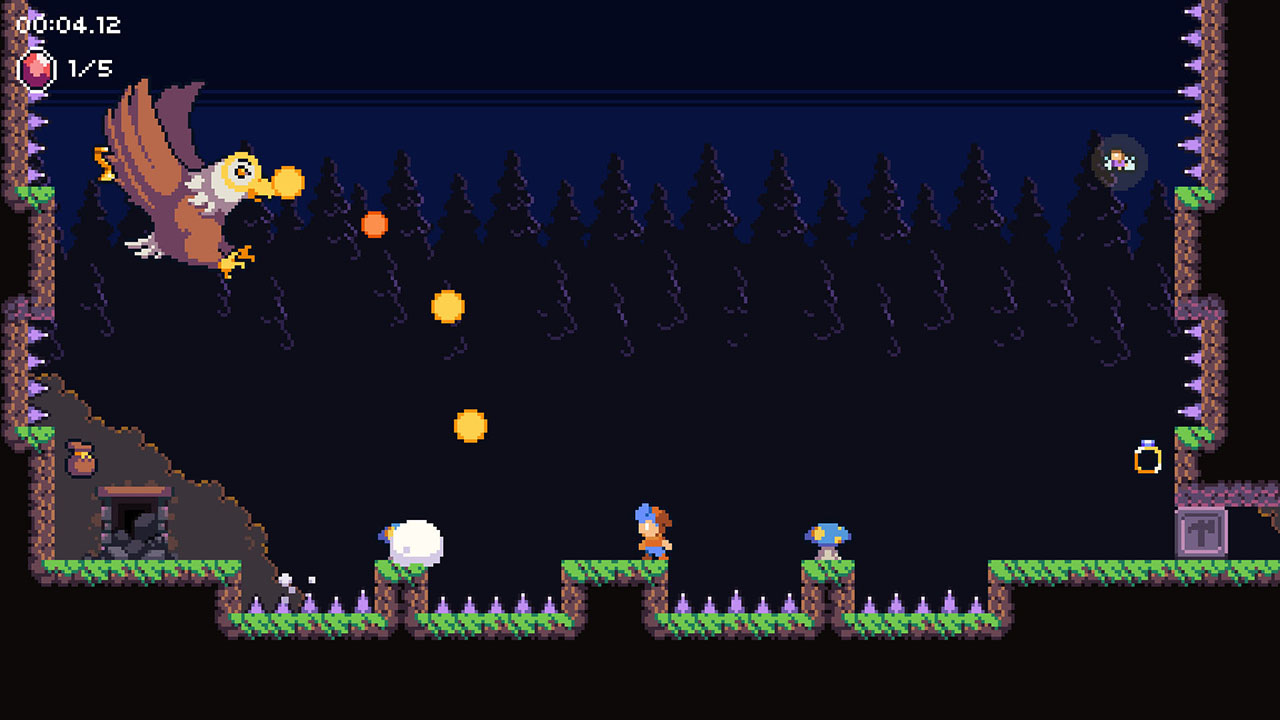 Even in the early levels you’re expected to make jumps and throws all within a few frame window, and that’s just completing the levels, not going for the extra objectives. Threading the needle can be a nice challenge every now and again, but it should not be the entirety of a game, and unfortunately that is all the game offers. The game becomes more frustrating than rewarding, until you have no choice but to put it down for a few hours so your blood pressure can go back to a safe level.

Difficulty is one thing, but unfairness is another. Daggerhood is perfectly completeable, but I spent more of my time deciding if it was even worth it. I don’t think it is. Many poor design choices glaringly shine through, and the game feels like it lacks proper testing. Nothing about Daggerhood feels like it was meant to be fun, and instead I felt like I was being punished for not having robotic reflexes. More punishment is a poor reward for what felt like slaving through a half-baked level, and Daggerhood just keeps throwing them at you.