by Pete on May 3rd, 2019 in Nintendo Switch Reviews 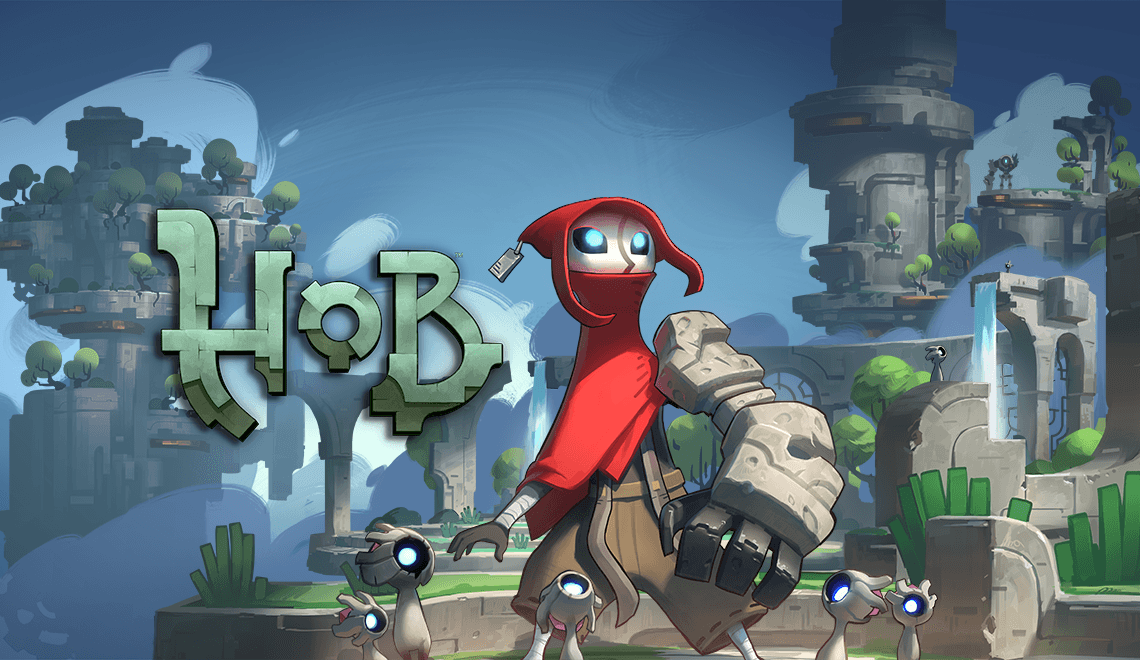 When I think of the words ‘Zelda clone’ my gut reaction is a rush of excitement before looming disappointment sets in, after realising no imitator will come close to being as good as that benchmark. That might be the case for many following this path, but Hob sends you on a truly worthwhile adventure that pays tribute to top down journeys like Links Awakening and A Link Between Worlds.

Castle in the Sky

Hob takes place in a beautifully manufactured world where nature and ancient technology collide. The art design is wondrous, with so much care and careful consideration in how it looks and directs you towards new areas. After dashing around little green forests in the beginning, you are caught off guard when your stomping ground becomes just a small piece of this huge interlocking machine world. It’s very reminiscent of the Studio Ghibli classic Laputa, which had a complex theme of nature intertwining with machine life.

Taking control of a red hooded robo-hero, you hop around steep cliffs trying to fix and decipher the mechanical world around you. The nature of Hob’s narrative is a wordless experience told to you through environmental clashes and actions of the side characters.  Lore is hidden in little pockets around the game but it is clear in this story that an alien like corruption has become the scourge of the machine world. 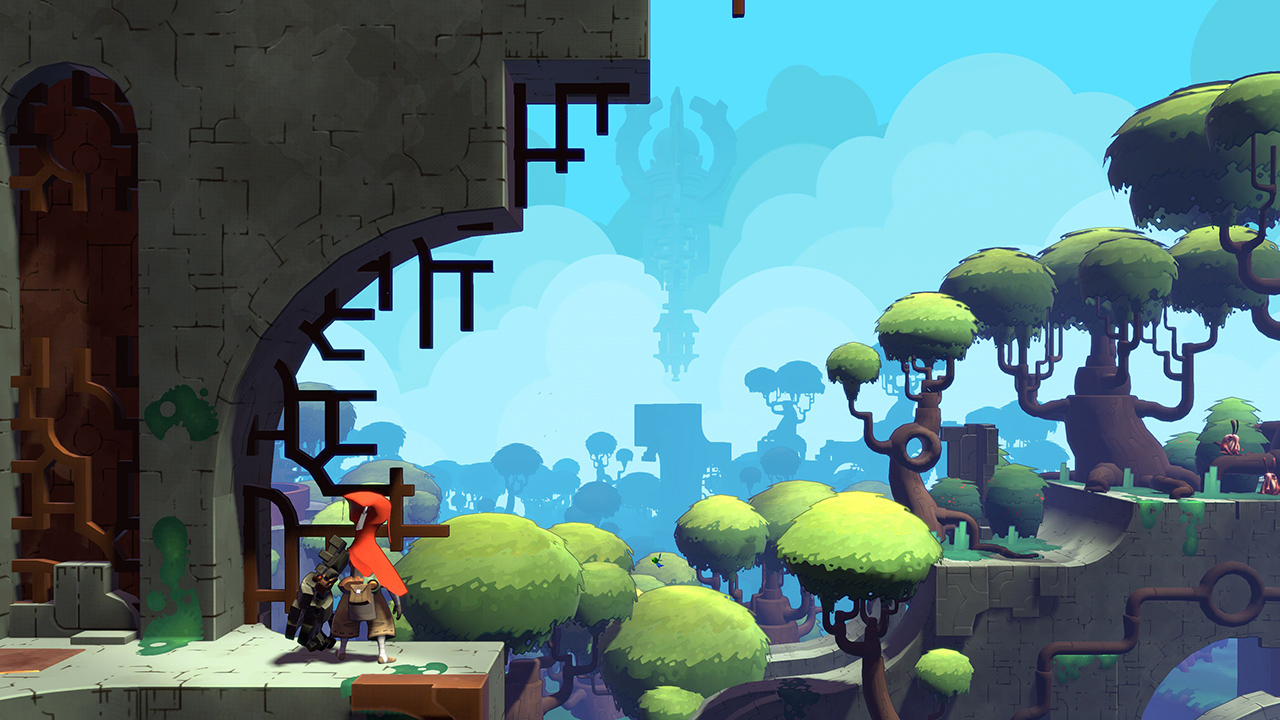 When a poisonous infection takes your arm, you receive an even more powerful prosthetic that’ll smash through walls and kick the ass of any bug looking at you funny. Your little neat sword is great and impactful during combat and you will pick up more abilities along the way to aid you in the fight. But while combat abilities can be upgraded and unlocked, fighting enemies never really becomes the focus.

A Piece of Something Bigger

Hob’s biggest strength lies in well-crafted puzzles scattered throughout its mechanical world. With each new set of problems, you start to unravel what you’re doing by analyzing the changes you’re making and what that now allows you to do somewhere else. After solving one set, you’re on to the next but it doesn’t feel like a chore.

The satisfaction you get from solving your average puzzle in an adventure games is a solid feeling that keeps you hooked, but it’s usually broken up with other types of gameplay. With Hob, the puzzles are everywhere and so densely packed together that it becomes the main thrill that it offers. You start to not even care that there’s combat or exploration or platforming nearby, because these moments are so well executed. 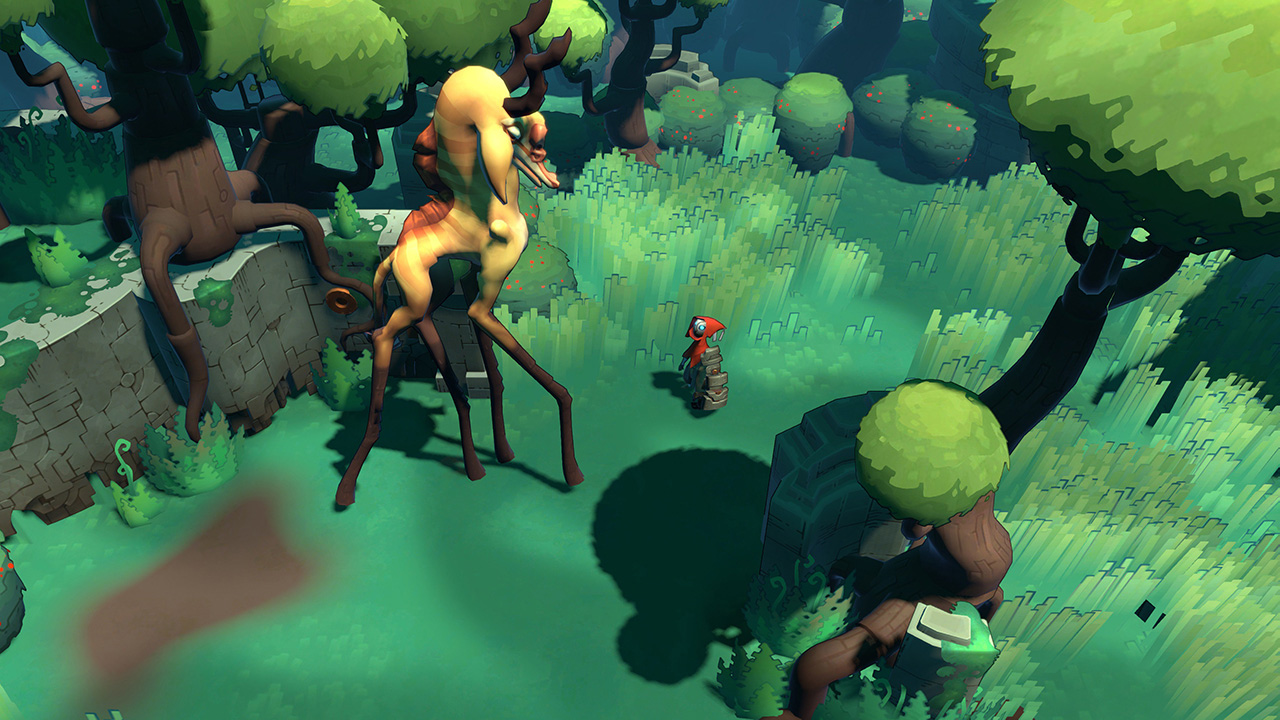 That’s not to say that this port doesn’t have issues present. The Switch’s release of Hob is the definitive edition, ported by Panic Button and published by Perfect World and while it looks great some of the time, there are significant frame rate drops during big moments where the environment is shifting around. TV mode looks pretty good and near the fidelity of other versions, but the portable mode uses a type of cel-shading technique to keep the game running at the cost of a lot of resolution.

While the TV version is probably just hitting 720p, in handheld mode it’s going sub 480p at some points because it can graphically be blurry to the point you’re playing something resembling 3DS visuals. Camera angles are fixed which can also be annoying in some segments, cutting off significant parts of the level you’re meant to see at pivotal moments.

Disclaimer: A review code for Hob was provided by the publisher.

Hob has it’s flaws but they don’t diminish from the fantastic world building and gameplay that Runic Games have constructed here. I’d forgotten what it was like to be engrossed by a game like this straight out of the blue. Hob hits you with a chain of solid game design and elements from Metroidvanias and other modern titles without doing much flashy with it, but it still shines so brightly.