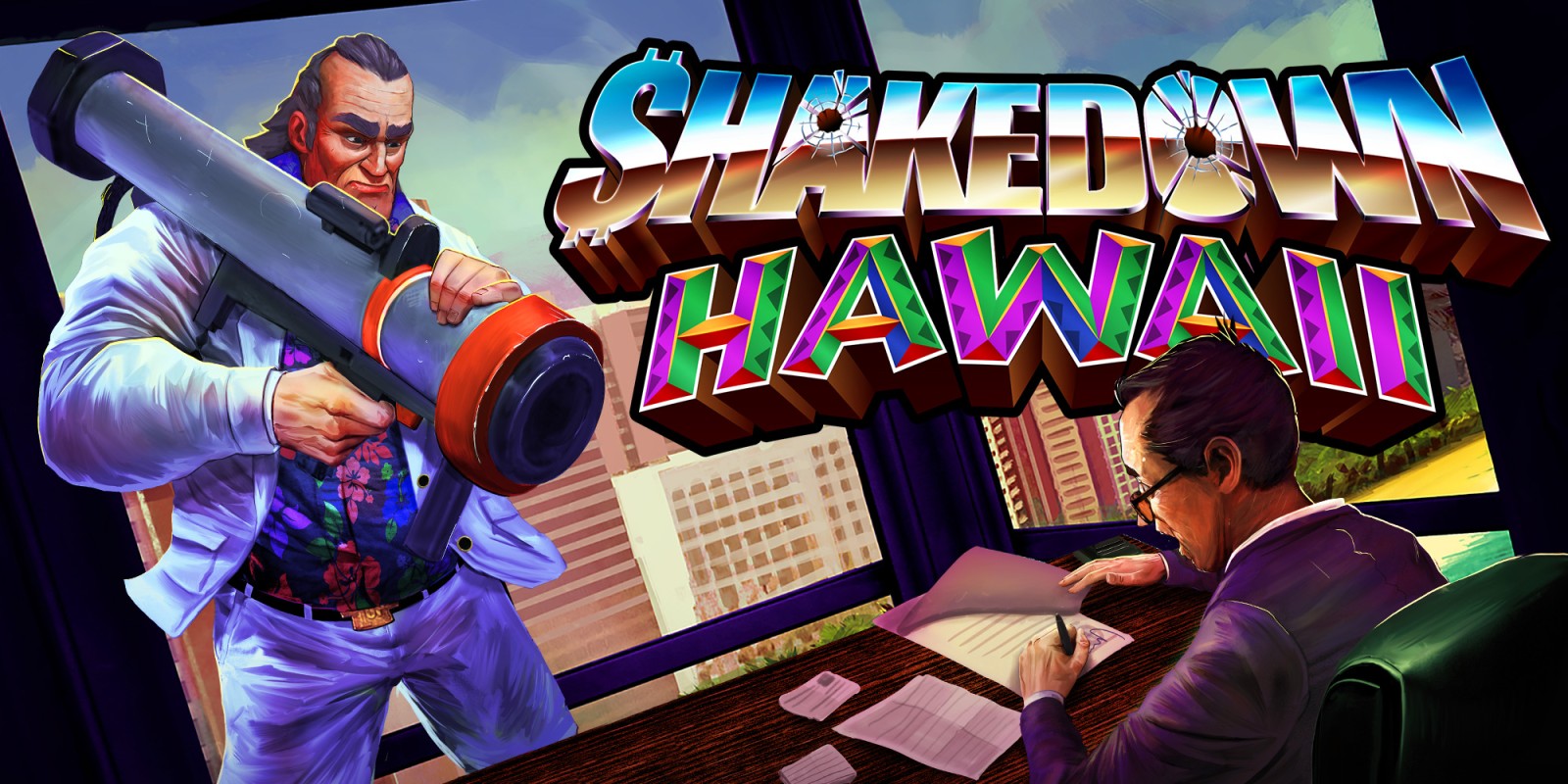 I think it is fair to say that the open word genre is one of the most popular in all of gaming. People just seem to love the idea of being able to roam in a massive sprawling world. Grand Theft Auto dominates sales charts, Red Dead Redemption immerses players in a western epic, Assassin’s Creed made the jump recently and even The Legend of Zelda technically started out as an open world game and recently refocused on that aspect with Breath of the Wild.

So with that in mind it is no surprise that people have been eager to get their hands on the long awaited Shakedown Hawaii, a psuedo/spiritual sequel to Retro City Rampage. Ever since GTA: Chinatown Wars there’s been a distinct lack of the 2D bird’s-eye open world game. It all seems to be about fancy 3D nowadays so with a gap in the market they made their move and saw great success with their first title, but how does Shakedown Hawaii compare? 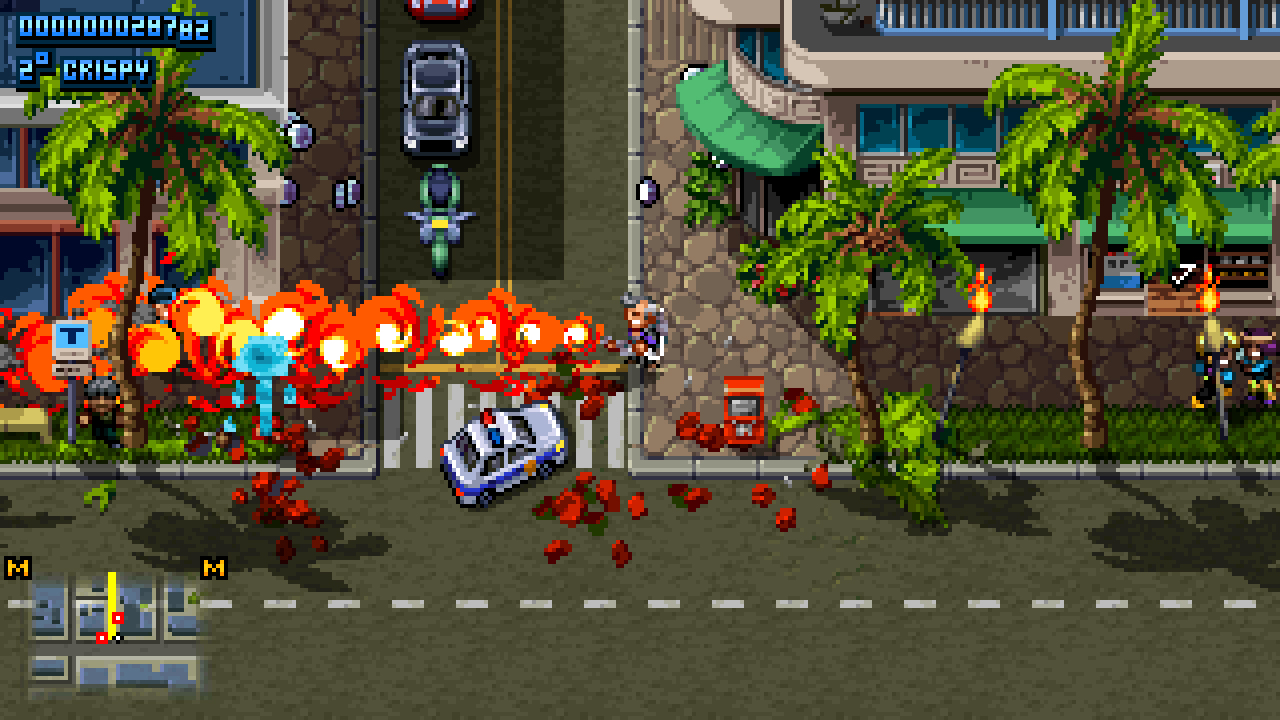 Players take control of “The CEO” in Shakedown Hawaii as well as his son, Scooter, and their South American muscle. The aim of the game is to get “The CEO’s” business back on track by any means necessary. Normally this involves some form of illegal activity. Intimidating local business owners, stealing coffee trucks, home invasion, appearing in game shows and all sorts of wacky schemes will be undertaken to scrape together the cash to get back to the top.

Taking heavy inspiration from the original GTA games, Shakedown Hawaii has a 2D bird’s-eye view. Players are free to roam the city and take part in story missions, optional challenges, change their characters appearance, and cause general chaos like any good open world game.

For the most part I did enjoy the main missions in Shakedown Hawaii, but as I progressed further into the game I started to notice some issues. The missions are relatively short and never really develop into longer scenarios where the stakes feel higher. The difficult does increase by a margin, but after a while it felt more like I was just going through a checklist. There is a nice variety in the missions though, it’s not all theft and gunning people down. At times you will even partake in some light platforming segments. 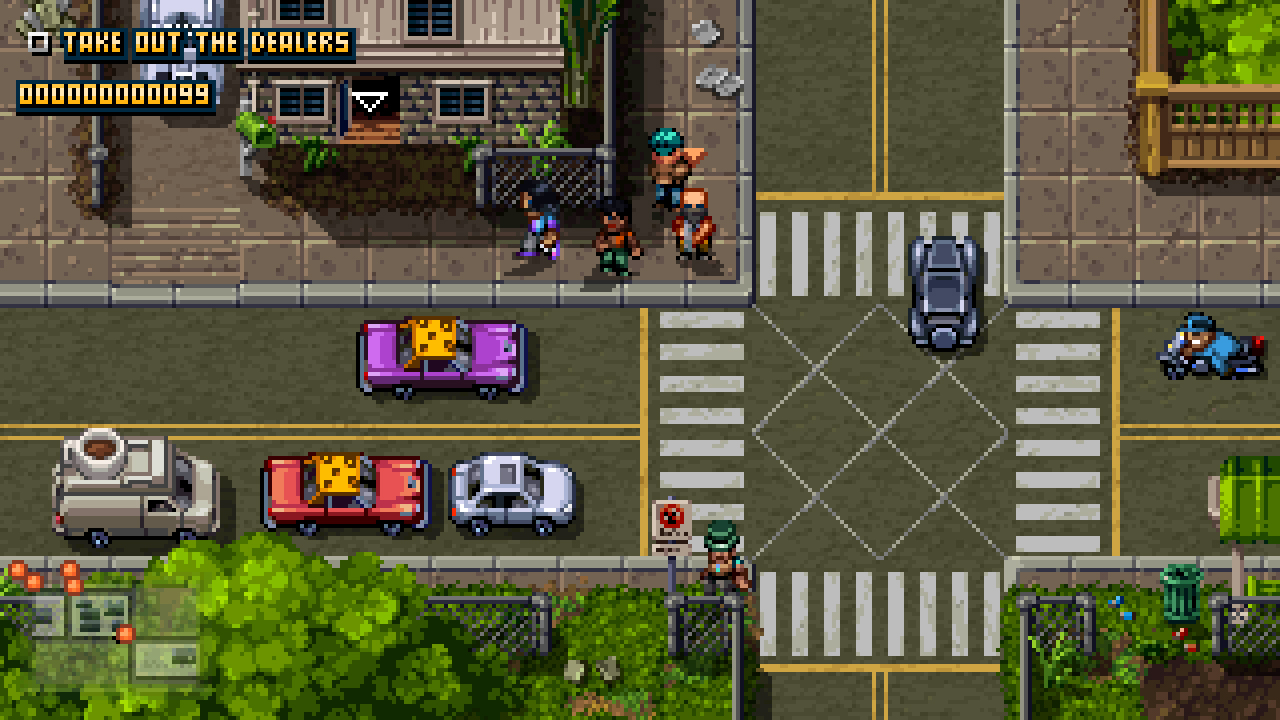 One of the more unique aspects of Shakedown Hawaii is that players can buy businesses and property. At first I found the experience rather engaging. There’s a lot to buy and to upgrade on each property, but as the game progressed I soon found it to be quite the hollow experience and I can’t really tell if this was intentional or not. For the most part the money you gain is only used to buy more properties. You can purchase upgrades for your characters which are quite expensive, but outside of that money feels useless. Properties do open up some more possibilities, but ultimately they don’t impact the experience that much. It all just feels like busy work.

The biggest offender is the “Cash Multipliers” you can purchase for each individual property. There’s a total of 13 cash multipliers that can be bought for each property and 415 properties to purchase. You can’t bulk purchase cash multipliers for multiple properties nor can you purchase all 13 at once for a property. This isn’t a major issue as money is never needed that much, but this feels like the perfect representative of my issues with Shakedown Hawaii and many open world games. At times it just feels like padding and busy work. You aren’t going for 100%, cause you want to play more. You are going for 100%, cause you want 100% for some reason?

Shakedown Hawaii is far less focused on delivering a strong narrative and more geared towards taking shots at society in general. From start to finish there is a good dose of humour to be found here with the main target being businesses, their practices, and the people who seem to buy into it all. Suffice to say you’ll be chuckling throughout most of the story experience. A slightly stronger narrative would’ve been nice though as towards the third act things did start to drag a little. 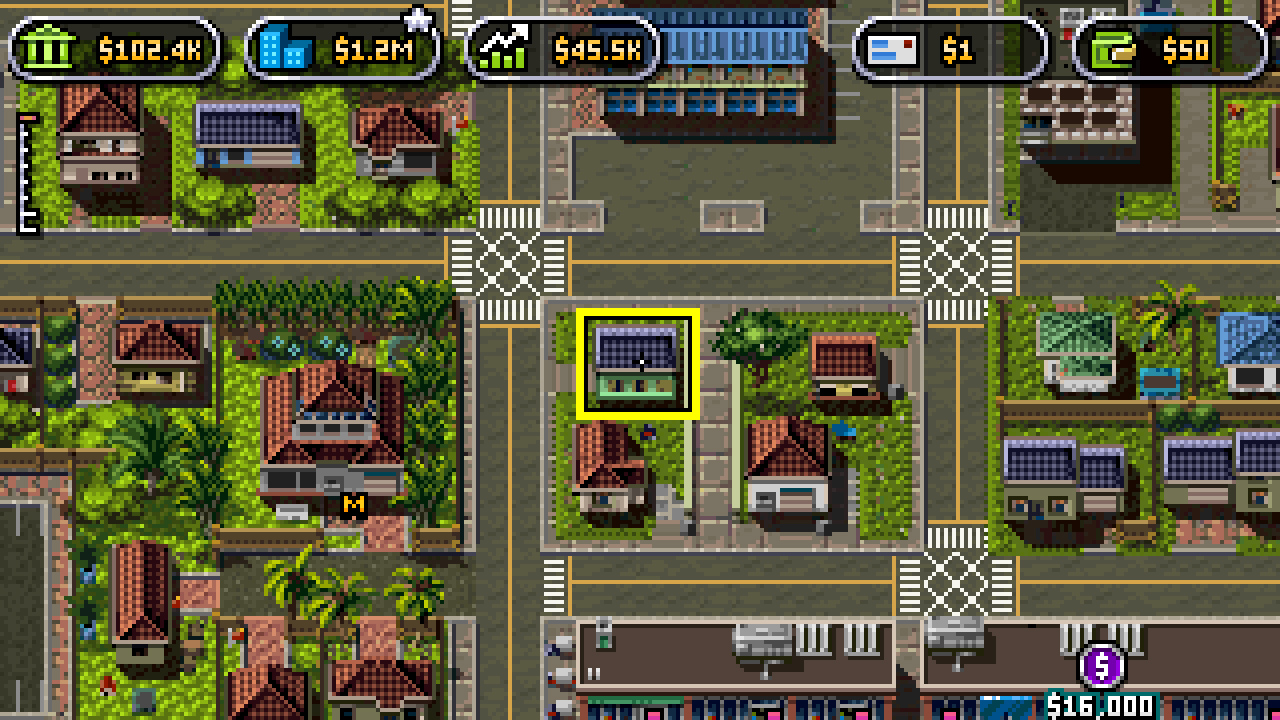 You really can’t fault the visuals on offer in Shakedown Hawaii. Its “16 bit” inspired aesthetic feels nostalgic, but refreshing as well. The most impressive aspect of all to me was how unique the citizens were. As you roam around you’ll notice them engaging in all sorts of activities: selfies, eating, handing out flyers, on the phone, taking pictures, and many more. There really is a great amount of polish given to Shakedown Hawaii for sure. Cars look distinct, you can enter a lot of buildings and so on.

Disclaimer: A review code for Shakedown Hawaii was provided by the publisher.

The effort and expertise put into Shakedown Hawaii is very clear. The issues I do have with it aren't problems I have with Shakedown Hawaii, but issues with the genre in general. Is there a lot of content for $19.99? Yes; but after the 40th shakedown you might ask yourself: "What's the point?" For those who don't mind the checklist mentality of open world games, Shakedown Hawaii is perfect for you, but for those who can't stand it, you may want to look somewhere else.