by Andrea on June 13th, 2019 in Switch Era Talking Points 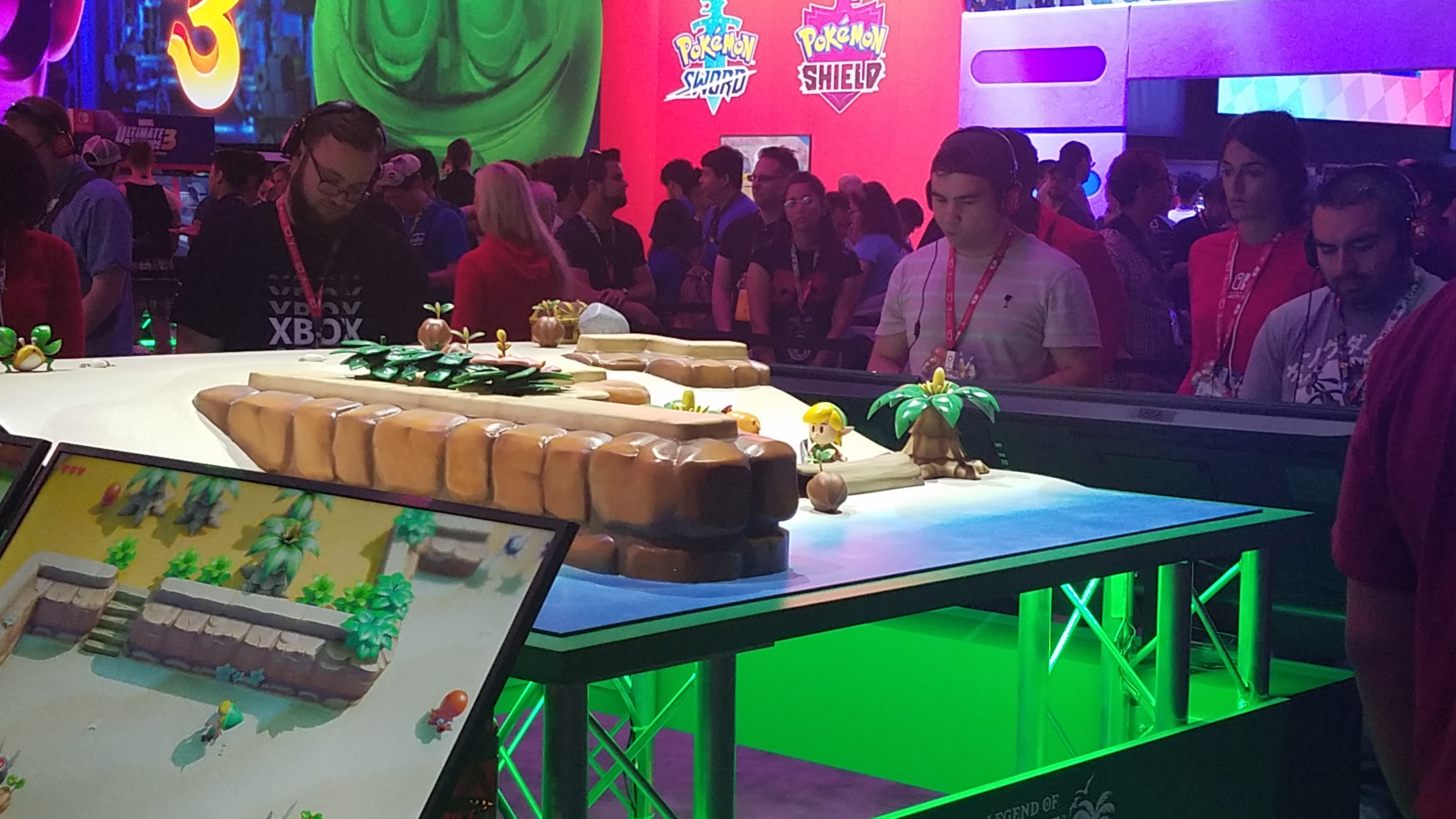 We’ve approached that time where gamers everywhere are salivating over new gameplay, trailers, and all sorts of news related to the biggest releases over the coming year; E3 2019 has shaped up to be a pretty exciting event, and it’s been a hell of a time for a first-timer such as myself.

Among the giants of the industry hustling to show off their newest games and assets, Nintendo continues to send out a formidable lineup of titles. As a JRPG fanatic, the Nintendo Direct for this year’s E3 had me nothing short of glowing, and the rest of their titles were a blast to play as well. Before I end up rambling any further, here are my impressions on the biggest Nintendo games I got to play, starting with:

My first thought here was that the gym’s design was heavily inspired by Super Mario Sunshine’s Ricco Harbor. The puzzle had me pushing color-coded switches in order to remove waterfalls blocking my progress. Pushing these switches also turned the waterfalls on again, so next thing I knew, I was solving the relative easy mystery of the waterfalls while battling through three Trainers with one Pokemon apiece: Vulpix, the new Grass-type Gossifleur, and Impidimp, a Dark/Fairy imp that wasn’t shown until this demo; I only got to see Impidimp use Sucker Punch before my Corviwing OHKO’d it with Steel wing. Oops. Speaking of which, my party consisted of the three starters Grookey, Scorbunny, and Sobble, Wooloo, Corviwing, and the other new Pokemon of the demo, Yamper. As the name implies, Yamper is a cute Electric-type Corgi with a cool new ability called Ball Fetch, which collects the first UNSUCCESSFUL Pokeball attempt if Yamper isn’t holding an item, which sounds pretty synergetic with Quick Balls.

After completing the puzzle and defeating all the Trainers (Going back to the gym entrance to get my party healed by some nice dude), I was finally ready to face Gym Leader Nessa. I stepped through the doors to a massive stage with a crowd around us, and soon enough, the battle began. Nessa started with Goldeen, which was no problem for my Grookey to handle. It was at this point that the attendant watching me reminded me of Dynamax, the weird new mechanic that turns your Pokemon into a giant, therefore making it more powerful in the process and changing its moveset as well. It was there I learned that Dynamax only lasts for three moves before it wears off, so once Nessa sent out Drednaw, I knew that was my chance. Both of our Pokemon turned into giants, and Drednaw got the first move, using a rock wall to drop my Grookey to critical health before I OHKO’d the poor Water/Rock-type with Overgrowth. With the demo finished and an astonished attendant wondering how I beat the gym leader so quickly, I walked out and got a cool set of pins as my parting gift. 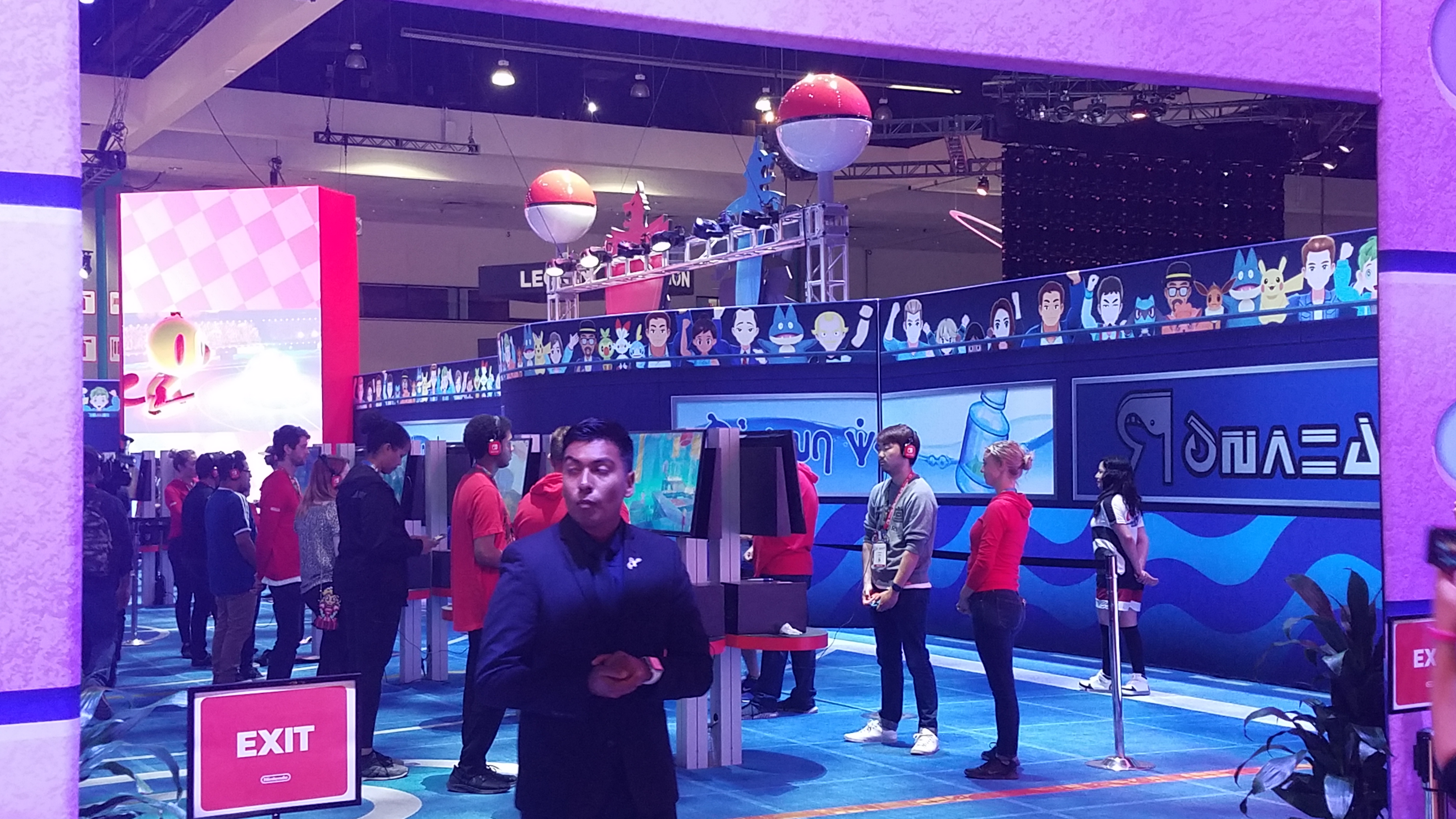 Despite the recent news about no mega evolutions, Z-moves, or even a National Dex, I think Sword & Shield are going to stand up high. Maybe Game Freak will at least reconsider the latter for the inevitable third version/sequel?

I had 15 minutes with this remake of the Game Boy Color classic, and boy I wish I could’ve had longer.

The story here’s the same as far as I can tell: Link awakens in the house of Talin and his daughter Malin on Koholint Island, and has to figure out a way back home. With only so much time on my hands, I eschewed exploration in favor of getting my sword and shield back and tackling the Mysterious Forest. The art style threw me for a loop initially, but I quickly grew to adore the cute, supremely colorful, almost toy-like setting. Link can now move in all eight directions, but so can the enemies, which leads me to believe that there will be more quality-of-life changes like this to modernize the game a bit more. 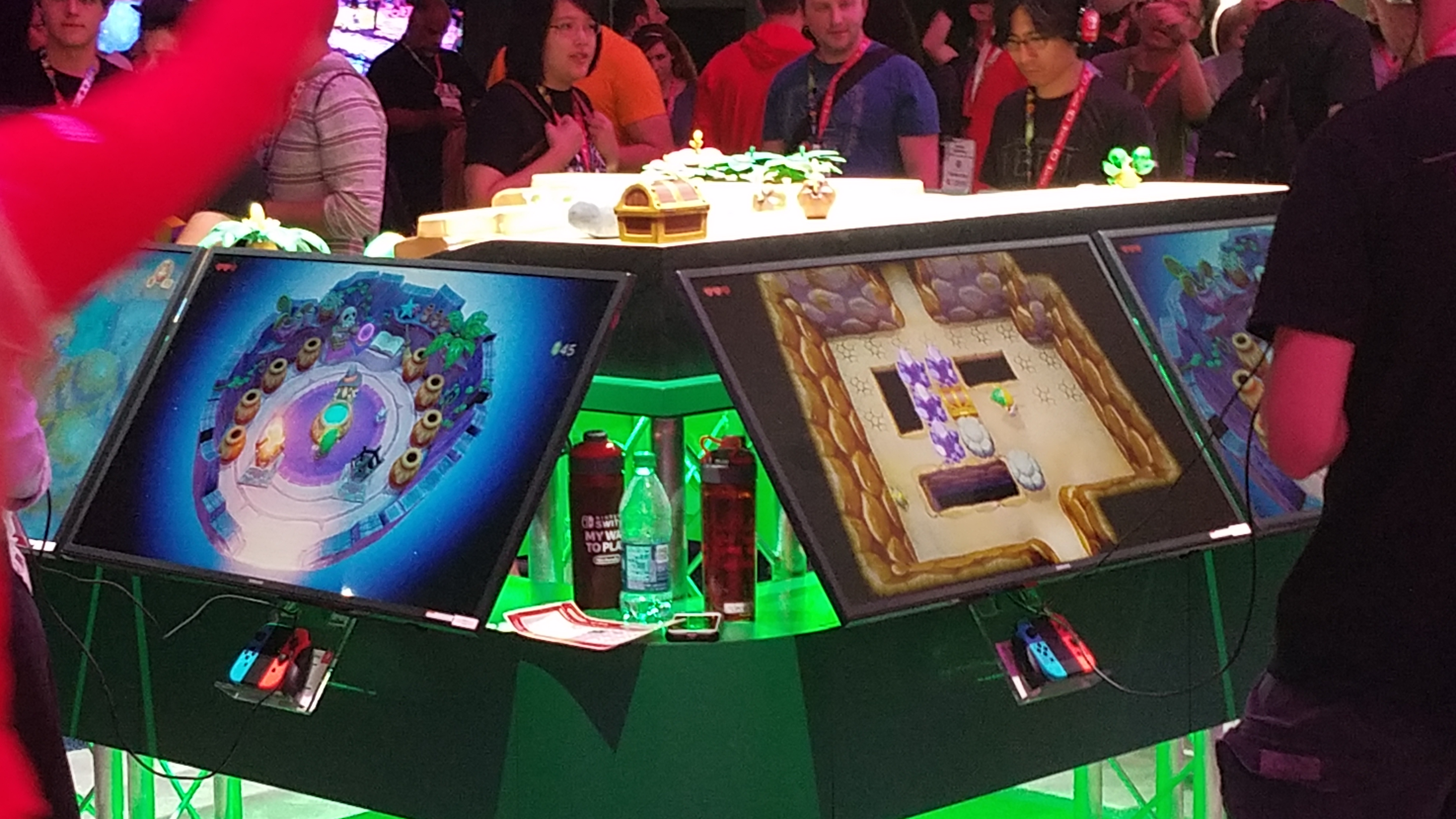 Even if you haven’t played the original game, or aren’t that familiar with older LoZ titles to begin with, Link’s Awakening feeds the need for a classic puzzle-solving adventure, giving me the kind of addicting gameplay that adventure, RPG, and puzzle games from the 90s to early 00s were full of. Although the demo was short for obvious reasons, it was nice to explore the Mysterious Forest, push boulders around, and occasionally find small powerups which allowed me to defeat enemies in fewer shots.

I got a really cool keychain trinket after I was done, which I already love.

Call me insane, but I never even touched a Luigi’s Mansion title before I got my opportunity with this, and I can tell you I had a great time. Nintendo’s demo area was equally impressive, having built a sweet haunted mansion setup that really prepped me for the game.

After walking past employees dressed as bellhops and the spooky hallways of the demo setup, I got started on the game. Polterpup’s tutorial was easy enough to understand: ZR to suck in with the Poltergust, ZL to blow out, press/hold A to flash light, and press ZL+ZR together for the new Burst move, which allows the Poltergust to emit a powerful gust that blows everything away in an area of effect.

Needless to say, Nintendo nails the spooky yet endearing nature of Luigi walking through a haunted castle by himself. The ghosts were no slouch, but after sucking them in and pulling the control stick in the opposite direction as Luigi struggles, a meter built until I got a prompt to hit the A button. Hitting it multiple times had Luigi slamming the ghost on the ground until it was defeated; I could also hit other ghosts while I was doing this, which was stupidly fun. Pressing Y fired Luigi’s plunger, which allowed him to rip shields from certain ghosts’ hands and open doors he couldn’t do otherwise. 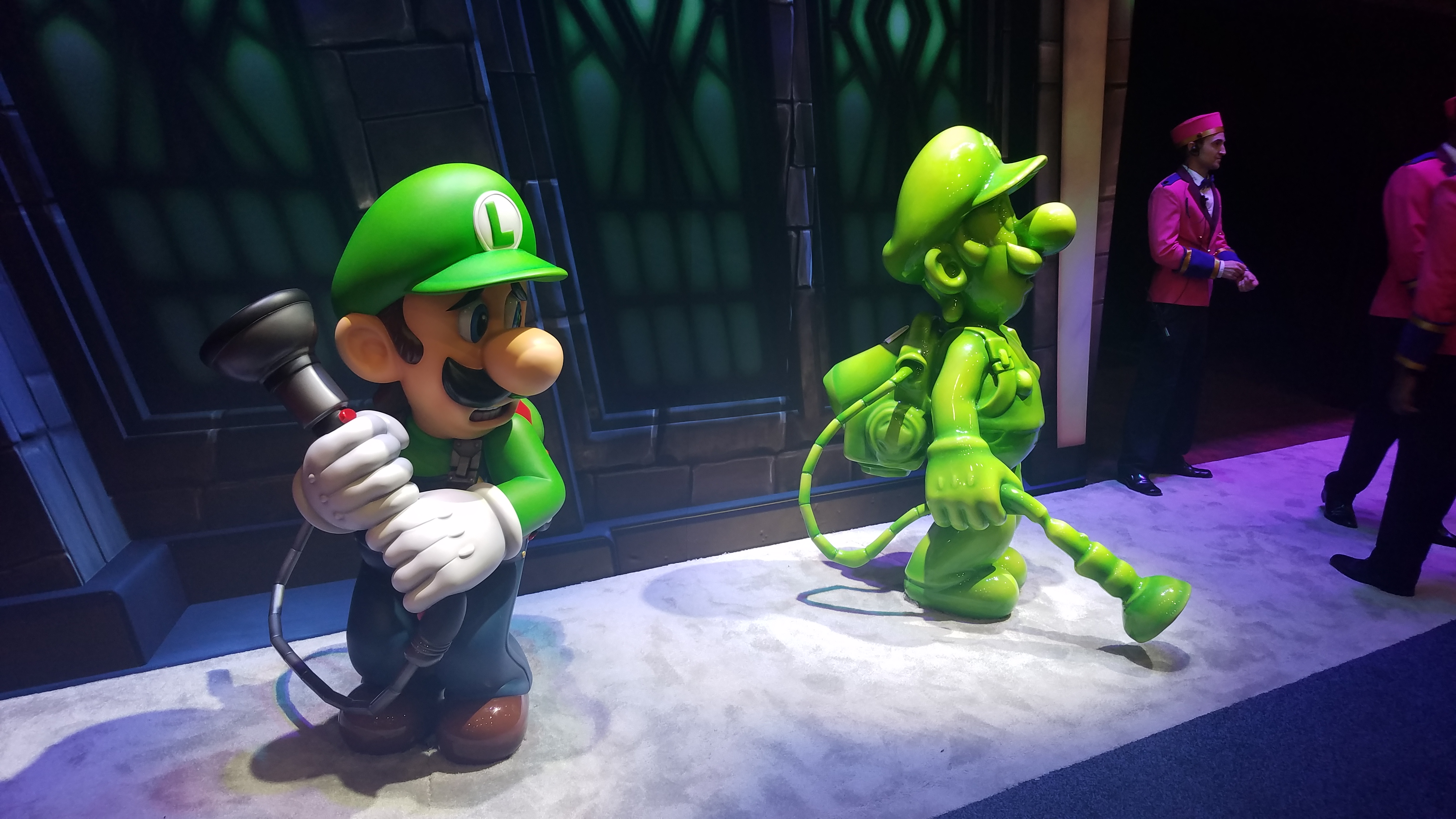 The demo also introduced Gooigi and his importance to solving puzzles in this third installment of the series. Pressing down on the R stick causes him to come out, and holding it down brings him back to Luigi. Gooigi can move through obstacles such as spikes and blockades that Luigi himself cannot, but he’s also weak to water; contact makes him dissolve and forces you to retrace your steps. Knowing how to use Luigi and Gooigi is going to be a lot of fun going forward.

The final boss was a ghost in an armored centurion outfit, equipped with a spear and a shield. This was a perfect example of learning through gameplay, as fighting with those ghosts with shields earlier let me quickly realize that defeating this nemesis just meant shooting the plunger at his shield, sucking him in, and slamming him a total of three times. After each successful routine, the boss got faster and the stage fired more arrows at Luigi, and in the end, it was an easy but super neat battle.

These were the major Nintendo titles I got to play, but I also got to play games such as Hollow Knight Silksong, TES: Blades, and Marvel Ultimate Alliance 3, not to mention all the non-Nintendo titles in between. Stay tuned for more.