by Cody on June 4th, 2019 in Nintendo Switch Reviews 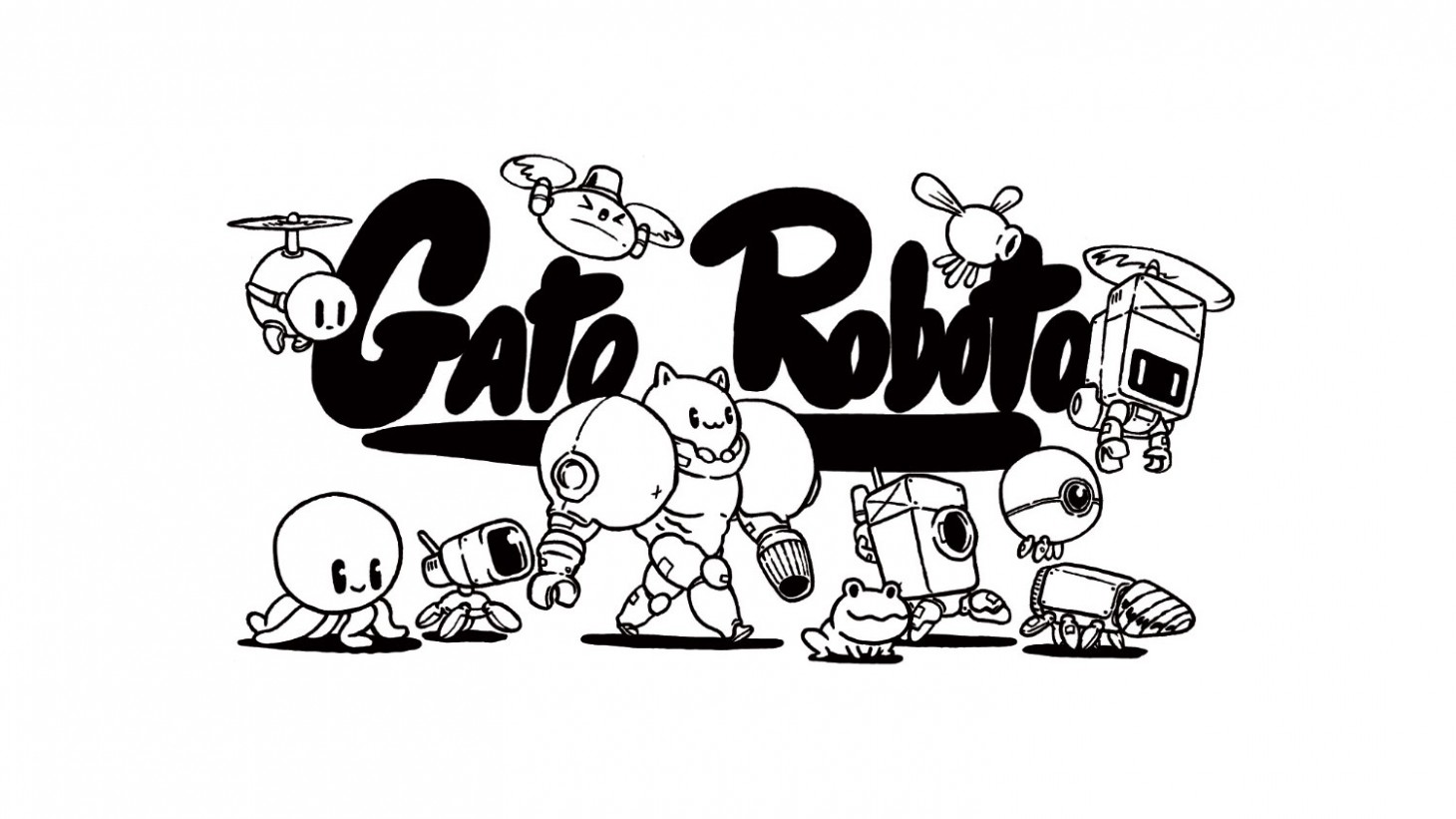 There’s something silly, but endearing about seeing a cat in a mech suit. Not a cat-like character, not even a hyper intelligent cat. You play as a cat, and it’s cute, and it’s in a mech suit. This is the primary draw of Gato Roboto. In a genre dominated by intergalactic bounty hunters and olde timey vampire slayers, there’s an inherent charm in being so… not that. Nothing about Gato Roboto is edgy, or in your face, instead it chooses to focus on a clean and cute monochrome aesthetic, and its simplistic but charming gameplay.

To make a quick distinction, Metroid and Metroidvanias are two different thing. The term Metroidvania comes from the Castlevania games that allow for Metroid-like exploration and backtracking, while also adding RPG elements. Gato Roboto has the same level of RPG elements as classic Metroid (that is, stable character progression, and things like optional health upgrades), making Gato Roboto NOT a Metroidvania. Simplicity is where Gato Roboto shines, and I feel that adding in RPG elements would only detract from an extremely solid game progression. 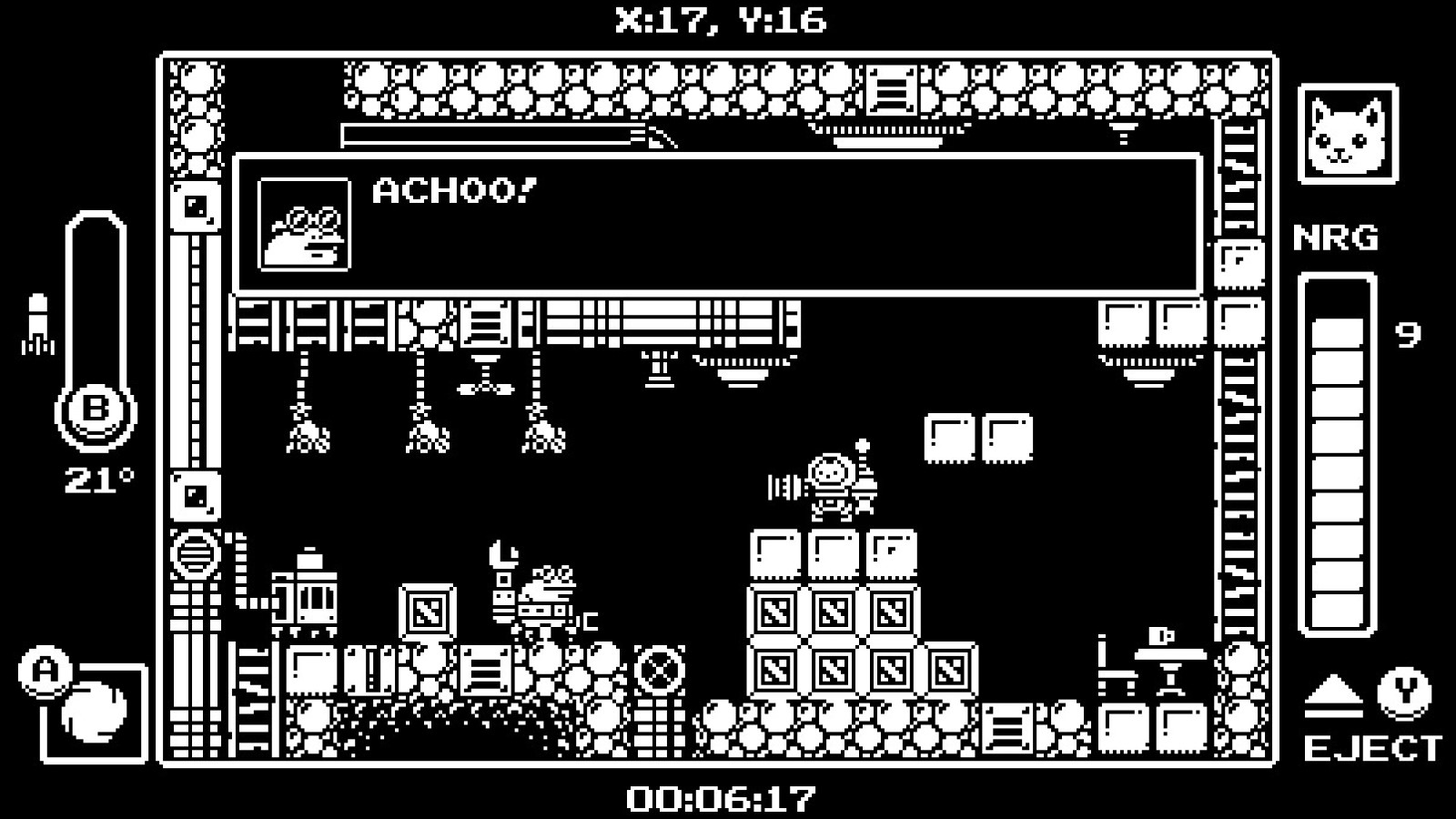 Enemies do not drop anything upon death, there are no health or ammo pickups, no currency. Gato Roboto is a game about exploration, not exploitation, and demands that if you want to beat it, you need to do it with your own skills. Kiki, the cat you control, is a lover, not a fighter. Kiki can’t take a hit, can’t do damage, has no real way of overcoming obstacles besides wall climbing, Your mech suit on the other hand, has a gun, and a number of upgrades to help you along the way, standards like missiles and dashes, and even a strange, Sonic the Hedgehog style spin attack jump. You can eject Kiki at almost anytime for exploring hard to reach areas, and voila! You have your gameplay loop.

Following the orders of your master, space soldier Alex, you explore an out of commision research base where a mysterious emergency signal has gone off. Alex, having crash landed (because you really should never have a cat loose on a spaceship), has become sealed in the ship, so it’s up to Kiki to solve the mystery. The plot is incredibly simple, but still manages to be charming as Kiki seems to think of it all as a fun diversion from normal cat life. Kiki meows through dialogue as NPCs discuss the severity of their situation, and the faux Banjo-Kazooie “voice acting” kept a smile on my face the whole time.

Gato Roboto is not an overly large game, finishing with 75% completion in around three hours. Never once did I feel a lack of progress or any sort of tedium, leading me through simple puzzles and moderately challenging combat. Gato Roboto feels tight to play in the best way possible. Shooting in four directions, tracking the cool down timer on your missiles, spin jumping into an airborne enemy, nothing in the game feels bad to do… except maybe Kiki. After an actually good water level, and a super fun fire level, at around the 4/5th mark of the game, you enter a Kiki only level. That means no combat, just a pure test of timing and platforming. Unfortunately, while the mech controls extremely well, Kiki has an unfortunate slide to their movement, making this precise, yet thankfully short section, a little frustrating. This one bit of not so great is thankfully the only part I didn’t enjoy, and even then, ultimately it was still more than passable. 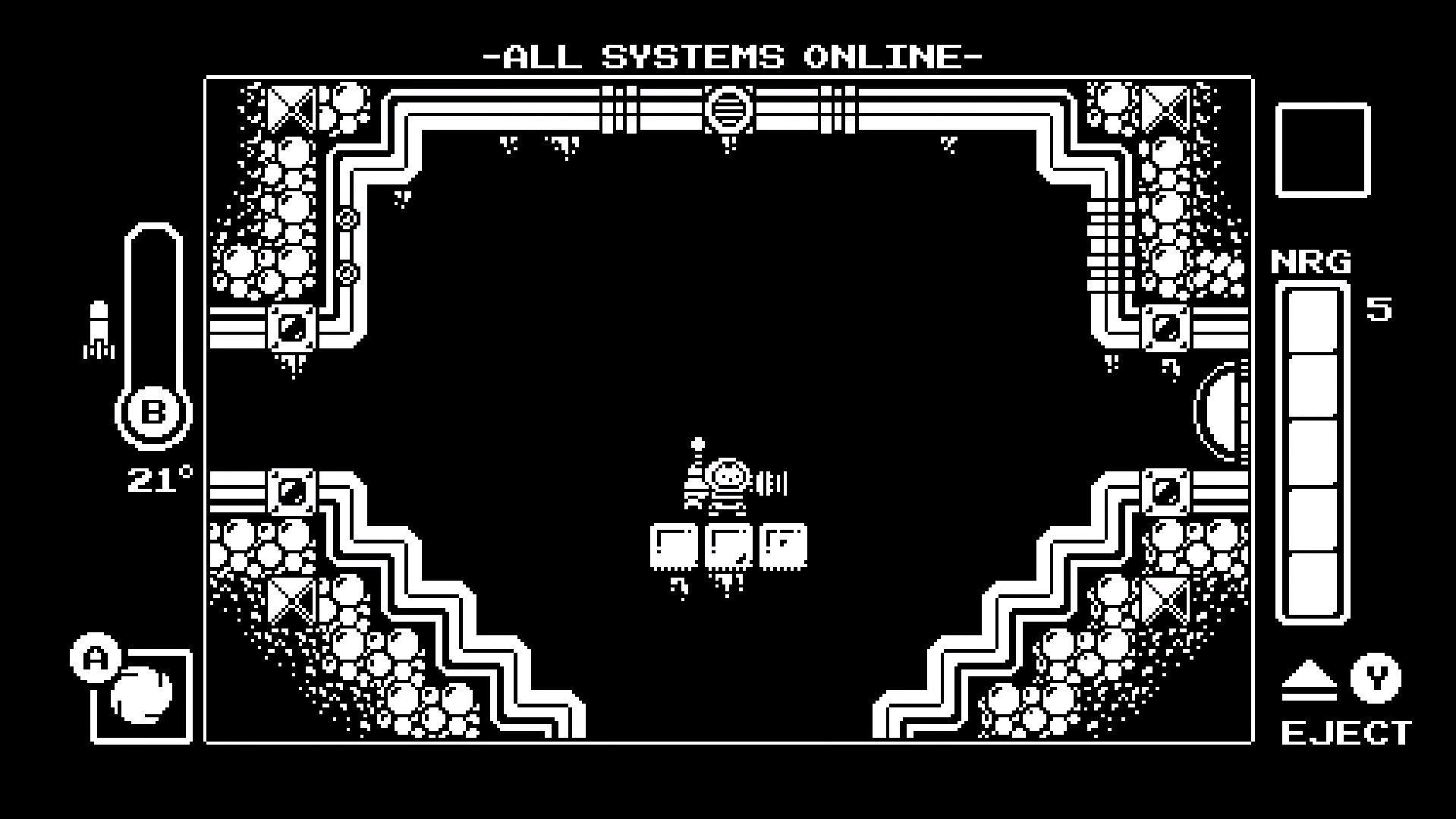 I wish there was just a little more to Gato Roboto. Just a little bit more for it to act as more than the gaming equivalent of a palate cleanser. One or two more levels, one or two more upgrades, and I would be head over heels for Gato Roboto. A charming Metroid-like that doesn’t take itself too seriously is definitely not a bad thing in the slightest, but there’s not much that makes it stand out. In fact, I would say that the draw of this game is its simplicity, but again simplicity is exactly what makes it hard to stand out.

If I had to sum up Gato Roboto in one word, it would be “pleasant”.  I like that you can play as a cat, and that you can shoot a gun, and explore, get upgrades, and just in general enjoy a short and fun game. Gato Roboto tip toes a line of “needs more” and “just right”, but as a result, kind of sticks in my throat as a hard to recommend game for non-enthusiasts. This would be great either for people who are hardcore Metroid-like fans, or someone who has been too intimidated to stick their toes in just yet.

Disclaimer: A review code for Gato Roboto was provided by the publisher.

Charm and casual gameplay can get a game pretty far under the right circumstances. Gato Roboto is painless Metroid-like where the feeling of progress is key. Short and sweet, but maybe a little too short and sweet for some tastes. Gato Roboto thrives on its clean game design, but might not be novel enough for some.