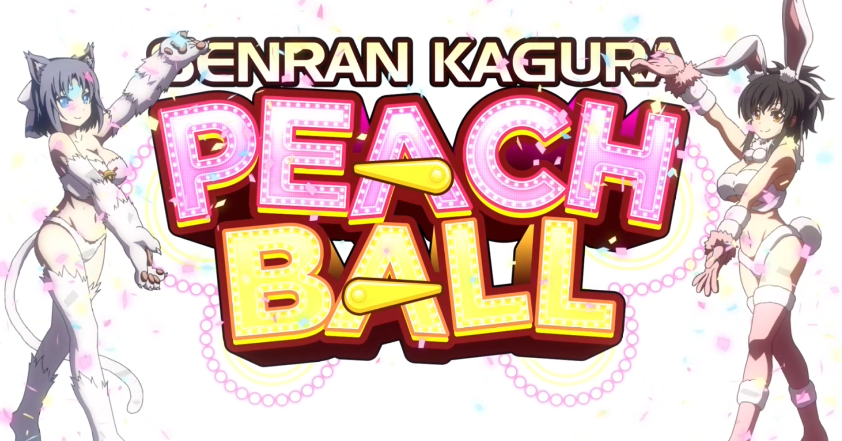 Hitting Nintendo Switch this month, Peach Ball is a pinball spin-off of the Senran Kagura franchise — it is a bizarre combination of genres to say the least, as Senran Kagura is a franchise best known for its fanservice and overall lewd presentation. In fact the series made headlines in February of this year, when it was revealed that the 7th main entry would need major changes as the present vision of the game couldn’t be released due to just how sexual the content was. So with this in mind, I sat down and dived right in to this game with a decent idea of what to expect.

The premise is simple — there’s a story as bare as the main cast’s clothing which drags forward the narrative. When one of the ladies finds a concoction and drinks it, she is soon turned into an animal girl. Matters are made worse when it is discovered that she is contagious. So it is up to the player to utilize the powers of pinball to get these girls back to normal before they are fully transformed into animals by launching balls at them and scoring points.

For those unfamiliar with the concept of pinball let me break it down for you. Players take control and flippers and must launch a ball all over a board to rack up points. If the ball falls between the flippers the player loses a life. It’s a simple concept, but a deceptively addictive one. The boards in Senran Kagura: Peach Ball are fairly dense as well. The pace of action keeps players invested as something new always seems to pop up. Power ups, missions, multipliers, targets and “Sexy Challenges” offer a wide amount of variety to keep players invested and this pace means that a level never feels stagnant. There’s just so many ways to score points and I must say as far as pinball goes Peach Balls boards are certainly offer a lot of action. 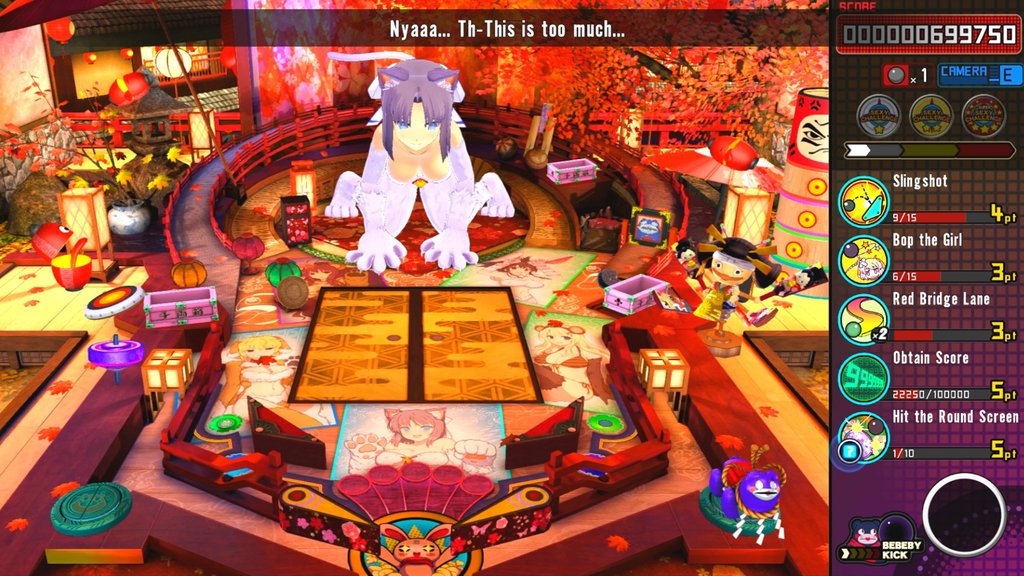 Of course the most defining feature of these boards is most likely the scantily dressed anime girl in the centre of them that when hit will score the player more points and where you hit makes all the difference. After a certain amount of time players will trigger a “Sexy Challenge” or “Super Sexy Challenge”. Small minigames that allow players to rack up points that end with a small animation of one of the cast being sprayed by water, ice cream melting on her chest, being licked by a lantern, smacked by a frog and numerous  other equally compromising animations.

The “Super Sexy Challenge” playing out slightly differently, it sees players launching balls at the characters breasts or buttocks concluding in them being turned back into a normal human anime girl albeit-naked. I might as well make this point now. You don’t go to the beach and then complain about too much sand or water likewise with Senran Kagura it might not be your cup of tea, but it is what it is.

Overall I can’t actually fault the core gameplay on offer by the pinball boards, but they do have one  fatal flaw. That flaw being the fact that there’s only two. Senran Kagura: Peach Ball costs $40 and whilst there’s more to talk about. The fact that the major gameplay feature comprises of only two boards is a mighty blow to the overall package despite the fact that both boards are solid and a great deal of fun.

On top of this issue is the fact that the difference between the story mode and free play are pretty negligible. Story mode essentially acts as a way to unlock more items for the shop. The levels do have their own missions to fulfill and end after the “Super Sexy Challenge” whereas Free Play keeps on going until you run out of lives. At the end of the day it’s pinball on the same two boards. 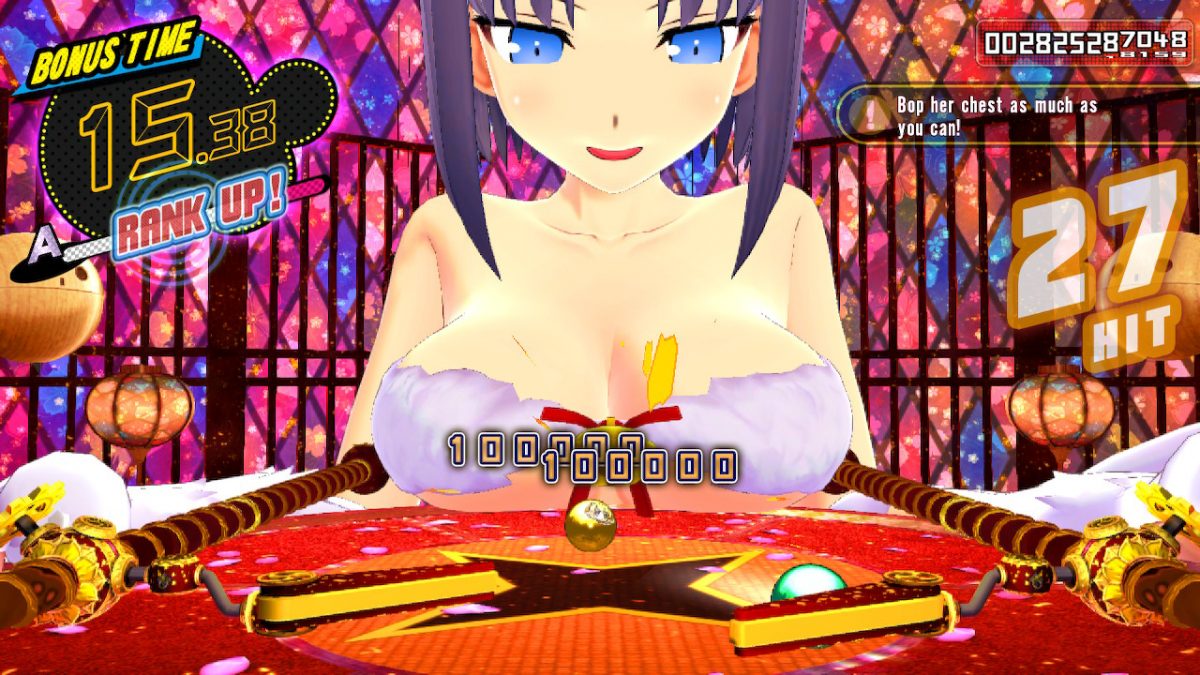 The shop does offer a lot of items to purchase which will add some life to the game, but there’s nothing that adds any meaningful gameplay changes to the pinball. It’s all cosmetic items to customize the casts outfits and illustrations.

Of course another major selling point for a game like this is its fanservice. The overall story is ludicrous, but as someone totally unfamiliar with the cast I did get some chuckles out of their interactions, so fans should enjoy their escapades more than I did. Then there’s the dress up, intimacy and diorama modes.

I must say I was rather impressed at just how many outfits and combinations that were on other in Peach Ball. The shop is packed full of outfits and accessories for players to purchase and try out on their favourite character. Once you’ve decided on an outfit you can get the cast to pose in numerous amounts of positions and backdrops in Diorama Mode. It certainly isn’t for everyone, but if you’re a fan of this kind of fanservice than Senran Kagura: Peach Ball does deliver.

I must say though, the intimacy mode had to be the most bizarre thing I’ve come across. It is essentially Pokemon-Amie, but rather than stroking a Pikachu it revolves around you touching an anime girl with ample sized “ballistics” to quote Luis Sera. The strange thing about this mode outside of what you are actually doing, is the fact that there seems to be no payoff. I touched, fondled and caressed until the heartmeter was full and nothing happened. It just seemed like a total waste of time to me.

Disclaimer: A review code for Senran Kagura: Peach Ball was provided by the publisher.

I must say I had a lot of fun on the pinball boards of Senran Kagura. When your biggest complaint about a game is the fact that you want more, that should say something about the overall quality of the package. With that being said it is just so hard to overlook the meagre offering of only two boards. A lower price or more major content would have done this game a massive favour.

At the end of the day, if you are a fan of Senran Kagura and like a bit of pinball this one is well worth checking out, but for those who are just looking for a pinball game, Peach Ball certainly has its moments, but at a price that is hard to justify.